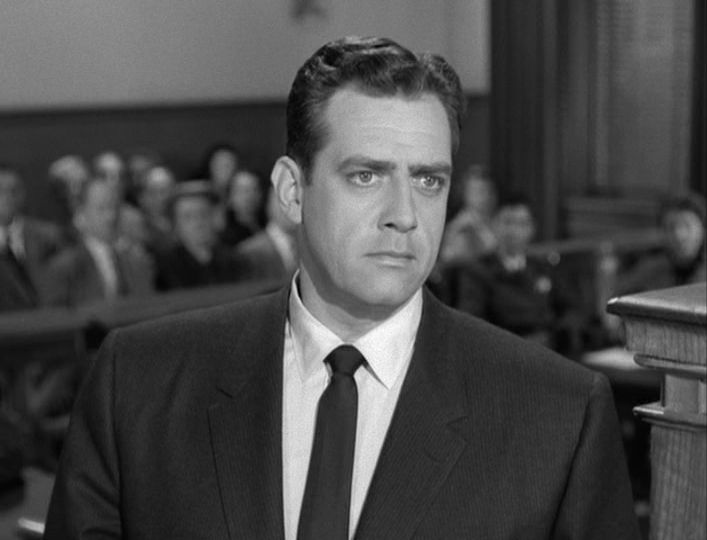 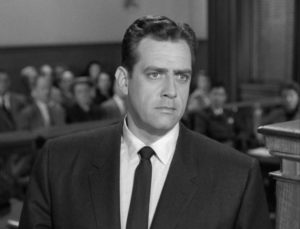 Well, here we are…still.  I hope you are all doing well and haven’t killed your spouse yet.  Okay, that might be a bit drastic but I’ve been influenced by crime TV during my “staycation”.  Specifically, I’ve been spending a lot of time with Perry Mason, the TV show from the 50’s and 60’s.  Some things have not changed much in the intervening years – just as with ther current show, Dateline, the spouse is almost always the perpetrator.  Hopefully, you are still experiencing wedded bliss and Keith Morrison won’t be knocking on your front door anytime soon.  But…back to Perry.  I stumbled across the series as I was surfing our 450 channels for something to watch.  As it happens, Family Entertainment TV (don’t worry – I’d never heard of it either) was starting the series from the beginning.  What the heck?  I figured out that to watch the entire series from beginning to end without any breaks takes up 10 days. Heck, I don’t have anything else to do.  Plus, I relished the idea of taking a trip down memory lane recalling those wonderful Saturday nights when I watched the show, intrigued not with Raymond Burr, who played Perry, but with his “confidential secretary”, Della Street. 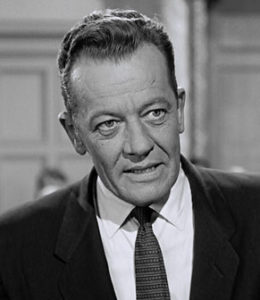 It has been interesting watching the series as an adult. Obviously, beyond the tail fins on cars and the lack of cell phones, the biggest change has been the role of women. There was a woman judge in a few episodes but no female attorneys. Mostly, women played murderers or victims. But still, it turns out that the show influenced a good share of women.  Sonja Sotomayor, the Supreme Court justice, was one.  In her autobiography she says she was hooked on the law when during one episode Perry asked the prosecutor, Hamilton Burger, if he wasn’t troubled that he had spent so much time prosecuting Perry’s client only to find he was innocent. “My job as a prosecutor is to do justice,” Sotomayor quotes the prosecutor as saying. “And justice is served when a guilty man is convicted and an innocent man is not.”

That prosecutor was Hamilton Burger, who lost all but three cases to Perry.  Makes you wonder how the guy kept his job.  Turns out that William Talman, who played Burger, didn’t keep his job.  He was fired by CBS March 18, 1960, hours after he entered a not-guilty plea to misdemeanor charges related to his presence at a party that was raided by police for marijuana use. Back then they did not consider marijuana an “essential” business.  The shooting schedule was immediately juggled to minimize Talman’s presence on the show.  CBS would not relent, even after the charges were dropped.  In December 1960, after millions of fans protested, he returned to the show where he would remain until the end of the series.  Now that I’ve watched three seasons of the show I think I’ve figured out why he was so inept – every week he used the same line when objecting to Perry’s questioning of his witness: “Your honor, this entire line of questioning is incompetent, irrelevant and immaterial”.  Really, every frigging week he says the same thing.   Wouldn’t you think he – or the writer’s – could come up with something else?  No wonder he lost all those cases. 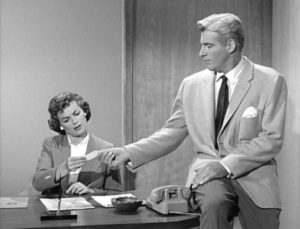 Paul Drake, Perry’s private detective, was the most fun character on the show.  He did all the dirty work – sneaking into office buildings, tailing a suspect or flying somewhere to gather background “dirt”.  Each week he seemed to get in and out of some perilous situations, often involving a beautiful woman.  Drake was played by William Hopper, whose mother was Hedda Hopper, the famous gossip columnist.  He was a big hunk of a guy and I always suspected that Della was torn between her crush on Perry and him.  Or maybe that was just my youthful imagination.  But back to Della.  She was played by Barbara Hale and I idolized her when I was growing up.  She had wonderful clothes, was smart as a whip, and she always got to stay in the room with Perry when a client spilled their guts.   I thought she had the perfect job.  Of course, now I realize that she was probably grossly underpaid, especially given that she seemed to be at Perry’s beck and call at all hours of the night.  Which makes me wonder how she afforded all those fabulous clothes. Nevertheless, Della was not just a secretary, although she fetched her share of coffee, but someone who Perry listened to and who often gave him the logic or clue needed to solve the case.

I just read that HBO is coming out with a new Perry Mason film in June, starring Matthew Rhys as Perry.  It will focus on the early days of his career, before he became a high-priced defense attorney.  I’ll keep an open mind, but I don’t know how it can possibly be better than the TV show.  No Hamilton Burger, no one in the gallery shouting “I did it!  I killed him.” at the last minute, and most importantly, no Della Street.  Somehow, that just seems wrong.

3 comments on “I’M IN LOVE WITH PERRY MASON”