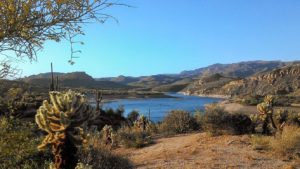 Since we are now the COVID capital of the world, my husband and I are looking for activities to get out of the house but not come in contact with other people.  Riding around in our car, somewhat aimlessly I might add, is about the only solution.  So we recently ventured the 30 miles up to Bartlett Lake, a body of water formed back in the 1930’s by damming the Verde River.  It is well known to local boaters and water skiers but is probably best known for its beautiful display of wildflowers every March.  This being June, most of the flora has cashed it in for the season.  Nevertheless, it is still a beautiful lake and a refreshing change from our living room.  As we drove into the marina I recalled the famous death of Margaret Lesher that took place at the Lake in 1997.  You might not be familiar with her but for those of us who lived in the East Bay of San Francisco, the Leshers were legendary.  Dean Lesher, was the publisher of 27 newspapers in California, including the Contra Costa Times.  After his first wife died he married Margaret in 1973 when he was 70 and she was 39.  By all accounts, she was a devoted wife but her story after Dean’s death is a cross between a Danielle Steel novel and a John Grisham murder mystery. 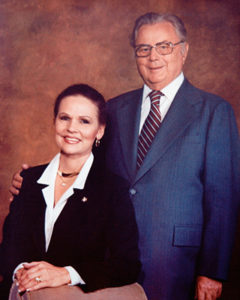 I first met Margaret in 1995, two years after Dean Lesher’s death at age 90.  She was an honorary board member of a charity I belonged to and I can still recall her sweeping into the room at a fund raising luncheon.  Chanel suit, glittering jewelry, perfectly coifed hair and her face surgically enhanced to make her look like the perfect Barbie doll.  It is a look I would come to know well when I moved to Scottsdale a few years later, but at the time I stared at her like a mongoose does a snake.  I learned more about her, tragically, in the next two years.  Turns out Margaret was the quintessential rags to riches story.  A former Texas beauty queen, earning the title of “Miss Peach Queen”, she became a flight attendant and married her first husband, producing four offspring over the next few years.  In 1969 she found herself in Contra Costa County, a single mother of four, eking out a living selling dresses at a mall.  It’s not clear how she met Dean Lesher but he fell instantly in love with her and by all accounts was a devoted wife for 20 years.

But something happened to Margaret’s confidence once Dean was gone.  She talked unabashedly about her numerous cosmetic surgeries and had an almost insatiable appetite for designer clothes.   She became very religious and prayed to meet someone who could take care of her.  Enter TC Thorstenson, a young rodeo entertainer 25 years her junior.  He was a rough and tumble guy, riding the circuit with his buffalo act.  He was handsome and caught Margaret’s eye at a trail ride in the Sierra foothills in the spring of 1996.  They began seeing each other seriously in August and by October they were married.  Unbeknownst to Margaret, Thorstenson had been married twice before, his second wife having filed for divorce after the third incident of spousal abuse. 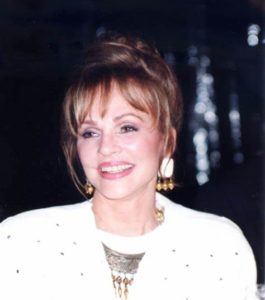 Margaret, just after she married TJ

Thorstenson convinced Margaret to buy a  small ranch in Scottsdale, where she began spending a great deal of time.  She redecorated the house in a cowboy motif to please him and showered him with an endless assortment of gifts.  It’s rumored she bequeathed a $3M wedding gift to him as well. But once they moved in, Thorstenson left on a series of trips, spending very little time in Scottsdale and even when there, he spent more time with his buddies out partying than with her.  Margaret was at home, increasingly alone and unhappy.  In April friends came to visit her and she admitted that she had made a mistake in marrying Thorstenson.  By the first week of May she flew home to Orinda and met with her attorney to pick up a proposed “postnuptial” agreement that would sharply limit Thorstenson’s benefits in a divorce. Both her attorney and other close friends had been urging her to finalize the agreement but Thorstenson had repeatedly put off Margaret’s requests that he sign it. When she returned to Scottsdale she presented him with the document.  A heated argument took place, he told Margaret they would deal with it later.

The following week, May 13, 1997, Thorstenson says Margaret wanted to go on an overnight camping/boating trip out to Bartlett Lake.  By some accounts Thorstenson had spent the better part of that day with one of his girlfriends, coming home in the late afternoon in time to hitch the boat to their truck and take off for the lake.  They launched the boat and then set up a campsite near the water.  What happened next has been a question for years.  According to Thorstenson, he awoke at 3:30 a.m. to find that Margaret wasn’t in her sleeping bag. Thinking she might have gone to the truck to sleep, he looked for her there in vain. He said he walked up and down the shoreline  looking for his wife, without success. It was at that point that he noticed the boat was missing.  Thorstenson said he decided to load their gear into the truck and find help. He drove back to the road and headed for the marina, where he called from the sheriff’s aid station.  The next morning they pulled her body from the lake, a stone’s throw from shore, clad only in her underwear. 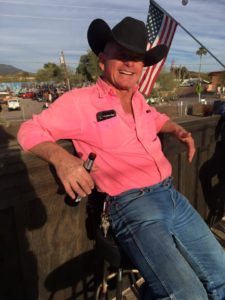 Thorstenson told sheriff’s investigators he had no idea what had happened, but speculated that Margaret had awakened during the night to check on the boat. She must have clambered in and somehow found herself adrift, then decided to remove her clothes and swim back to shore.  An investigation by the Maricopa County Sheriff’s department eventually ruled Margaret’s drowning an accident, clearing Thorstenson of any wrong doing.  Not many of her friends or family came to believe that outcome.

TC Thorstenson still lives in this area.  He was deeded the Scottsdale ranch by Margaret’s estate and eventually sold it for over $8M.  He owned a bar, Hogs and Horses, in Cave Creek for a while.  He is met with equal amounts of disdain and appreciation for his “colorful” personality in that small town.  In 2014 he was charged with assault and indecent exposure after luring a young woman to his home.  It seems some things never change.