Our ancestor, Joseph Billiou, first ventured to Northern California in 1856, long after the gold rush had peaked and the “easy money” was gone.  Thus creating the family motto:  “Always a day late and a dollar short”.  Despite failing to make his fortune, Joseph set down roots and our family became one of the lucky ones who could call the Bay Area “home”.  To us, and most other families in the region, San Francisco was the centerpiece of cultural, sporting and culinary experiences. I was also fortunate enough to earn a living in the Financial District for more than 20 years.  San Francisco has always had a unique vibe – welcoming people with divergent backgrounds and talents while maintaining a sense of unity and cohesiveness.  But it would appear “The City” is changing, in large part due to a 2011 decision by the supervisors to offer generous tax breaks to any tech company willing to relocate to San Francisco.  As a result, the companies are gobbling up real estate to establish a presence there.  Thousands of “techies” are moving to the area for work.   The result is that the housing market, which has always been expensive, is now downright ridiculous.  New condos are going up in some of the older, “less desirable” neighborhoods which has resulted in evictions of people who have lived there for generations.  And to add insult to injury, there is no affordable place for them to go.  San Francisco, it would seem, is on the brink of reaching Venezuelan levels of wealth inequality.  In the past four months I’ve seen three documentaries covering the changing dynamics – all of them were depressing.   After watching the last one I became nostalgic for the city that once was.  And for some reason, I thought about the song that was an anthem for San Francisco for more than 30 years – “The Sound of the City”. 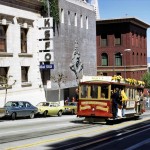 KSFO in its heyday

The song actually wasn’t a song at all.  It was the jingle for what was then the powerhouse radio station in the region – KSFO.  From the late 50’s until the early 80’s the station was owned by the singing cowboy, Gene Autry, and was billed as “The World’s Greatest Radio Station.  Particularly in San Francisco”.   In those days San Francisco had five TV stations and AM radio to cover news, sports and entertainment.  Autry quickly maximized his crown jewel by hiring a Murderer’s Row of disc jockeys:  Don Sherwood, Jim Lange, Del Courtney, Jack Carney and Al “Jazzbeaux” Collins.  Autry negotiated broadcasting rights with the 49ers and the Giants and had two legends, Lon Simmons and Russ Hodges, call the games.  Back then TV and radio stations had the good sense to sign off for a few hours in the wee hours of the morning and Autry wanted a jingle to use as the station went dark each night.  So in 1960 he commissioned the multi-talented Johnny Mann to write one for him.  When the song was first aired people thought it had been recorded by the Four Freshman, but in fact it was sung by eight studio singers in Hollywood, the most famous of whom went on to be the voice of Tony the Tiger.  The result was a beautiful masterpiece: the Sound of the City .  When you click on the link you will hear a lyrical song, reminiscent of a softer time when fun and bonhomie reigned supreme.  It is now the ringtone on my phone and each time I play it for a native of the Bay Area the person becomes misty-eyed. 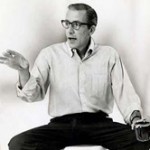 How did a song – and a radio station – become so ingrained in our psyches?  Well for starters, as I said, our entertainment choices were pretty limited.  But more importantly it is estimated that two-thirds of people living in the Bay Area during the 1960’s tuned in to listen to the bibulous Don Sherwood every weekday morning.  He was the Pied Piper of the Bay Area, with his throaty, cigarette-tinged chuckle that made even his reading of a Yami Yogurt commercial sound just the slightest bit dirty.  Each morning people gathered around the water cooler or the gym locker to talk about what prank Sherwood had pulled off during the morning commute.  That’s assuming, of course, that he had even bothered to show up for work.  A native-born San Franciscan, he was the product of two alcoholic parents and suffered from the disease himself.  It was a crapshoot each morning as to whether Mr. Sherwood was “not feeling well” that day.  But his show was so popular that even on the days he didn’t show up for work, his sidekick Carter B. Smith garnered higher ratings than the competitors.  Sherwood’s manic personality was hard for management to control and his wisest bosses never tried to make  “Donny Babe” conform.  After all, part of his appeal was his irreverent humor and his running gags.   No idea was too outrageous.  He once instructed everyone to crank down their car window and turn the radio up full blast.  He then broadcast the blare of a police siren.  Law enforcement reported a spike in fender-benders that morning but the gag had everyone laughing for weeks.  On another occasion he told drivers that on his command they should all turn left.  That stunt created havoc all over the Bay Area, particularly for the foolhardy souls who were crossing the Golden Gate Bridge at the time.  In 1961, when he challenged the young Jim Lange to a foot race from Stinson Beach to the Ferry Building in downtown SF, more than 60,000 people lined the route.  What was the attraction?  It was because KSFO, and Sherwood in particular, made people feel like they “belonged” to a community, regardless of their socioeconomic status.

The recent documentaries I watched report that San Francisco is becoming the epicenter of the “sharing” economy.  Which is somewhat ironic given that every picture I saw of the new “techies” featured them with headphones stuck in their ears, eyes cast downward at their phones, oblivious to the people and culture around them.  San Francisco has always been a city that changes and evolves but personally, I’ll take the “sharing” of 50 years ago – outstanding radio, a beautiful song and every once in a while, everyone turning left.

13 comments on “THE SOUND OF THE CITY”