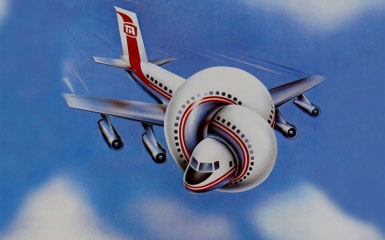 Most of the time I write about the destination, but this week it’s about getting there.  I’ve done a fair amount of air travel, both business and pleasure and I must confess that I’ve probably not uttered any of the above phrases.  But there is one thing that I utter after every flight – read on to find out.

The truth is after 2,000,000-plus miles in the not-always-friendly skies, I still think air travel is amazing.  It still blows my mind to think that I can get on an airplane in California, sit in a chair traveling 600 miles an hour 35,000 feet above the ground, eat, drink, sleep, completely ignore a person sitting inches from me and within a few hours I can be in Connecticut.  I actually flew to Connecticut a couple of weeks ago attending a sorority meeting . . . don’t ask, I’m still trying to explain it to my wife.  Anyway, I may be fairly alone on this one, but I think airlines get a bad rap. 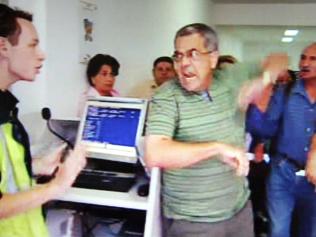 and they are demanding some answers.  These are the same people who haven’t started one of their own meetings on time – ever.  The reality is that as a society our punctuality bar has drifted fairly low and actually I think the airlines do a better job than most at being on time.

Admittedly, I love to travel, so I don’t see airplanes and airports a necessary evils – I see them as parts of the process – it’s probably that ‘life’s a journey not a destination’ thing that helps explains my lack of disdain for the airline industry.  Yes, I know you’ve read stories about passengers being held on tarmacs for hours without peanuts or vodka, or someone being violated during a pat down, but the reason you’re reading about them is that they are news – they are very rare occasions given the fact that there are somewhere between 85,000 – 90,000 flights in the world PER DAY! 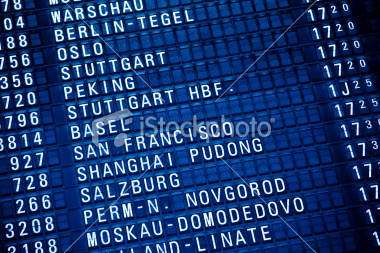 I actually enjoy being in an airport, because if I’m in an airport it means I’m going somewhere, and I love to go somewhere; with the possible exceptions of the dentist and back to Home Depot for the fourth time to get the part that actually fits.  Most airports today are full-service – you can get a haircut, practice your golf swing, and a ‘friend of mine’ told me that you can even get a massage with a happy . . . meal.  I’ve even heard of people who, if they have a few hours between flights and there is an International terminal, will go there just to eat something foreign and to listen to different foreign languages – OK, that was me on my last trip.

Of course when I was traveling a lot and was up- 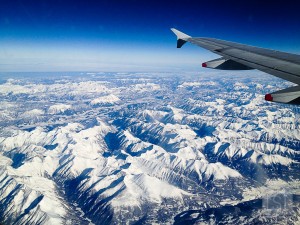 graded to first class most of the time that chair was a Bark-A-Lounger with a personal valet, but I ride in ‘steerage’ now and still enjoy the ride.  I always get a window seat because:

Additionally, I know when I’m in my seat, I will not get a phone call, I will not be asked to take out the garbage or fix that leaky sink – in short, I will not be bothered.  And instead of those dogged eared Sky Malls to leaf through and magazines where the crossword puzzle is already partly done (incorrectly), today we have ‘Apple gadgets’.  I don’t need to carry books or magazines with me, just my iPad, and of course, I have my computer for . . . computing, but the most important electronic accoutrement I carry is my iPod.  Not just because it affords me a rare opportunity to just sit and listen to some of the 12,000 songs on it, but it allows me ignore my neighbor.  I know that doesn’t sound very . . .well, neighborly, but I’m sure you’ve all experienced the person who sits next to you and says, “How you doing?” and before you could answer they’re telling you how they’re doing, where they’ve been, where they’re going and who’s supposed to meet them when we land. So when I sit down I put in my iPod earplug my neighbor assumes I’m busy – sometimes the iPod isn’t even on. 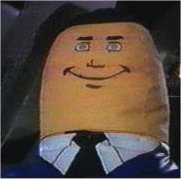 So, what do I always say after a flight?  As I pass the cockpit on my way out . . . I always say “Thank you”.  Because if I’m saying thank you it means that my perfect record of number of landings equaling the number of take offs is still intact, and I have the pilot to thank for that.  I’ll admit that flying isn’t always peaches and peanuts, but even if I’ve had a bad experience I’m still amazed by that chair that goes 600 miles per hour 35,000 feet above the earth. 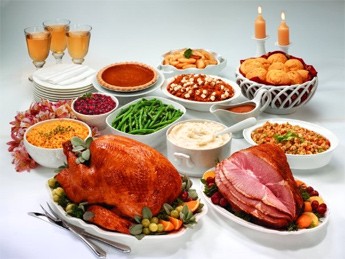 As my brother so accurately wrote last year, Thanksgiving is our family’s favorite holiday.  After all, we are related to five of the 17 families that came over on the Mayflower.  After I discovered this bit of history I deluded myself into thinking that our DNA is hard-wired to love the holiday commemorating them.  But the cold, hard truth is that we love this holiday because we love to eat.

We are all big eaters in our family.  There is never an “old maid” left on the  hors d’oeuvre tray and “thirds” are for the light eaters.  We are the family that inspired expandable waistbands.  We do have standards – we do not eat jellied cranberry sauce and no one belches at the table.  So far.

And yet we are not so slovenly that we have no self-respect.  No sir, we are all pretty good about exercise and trying to stay in shape.  For years I wore a pedometer to ensure that I walked 10,000 steps every day.  So in anticipation of Thursday’s annual bacchanal, I went to walk.about.com which has a handy little feature that lets you check all the food you’ll eat on Thanksgiving and then covert it to calories.  I thought that could be an interesting exercise, forgetting that when it comes to food, ignorance is bliss.

A glass of wine?  Check.  A celery stalk stuffed with bleu cheese?  Why not?  Okay, I’ll opt for one cracker with a slice of Stilton.  How much could that add?  On I went, from the turkey to the mashed potatoes to the requisite green bean casserole .  My total calorie count? 3,365!!!!

Then the intrusive, vindictive, people-with-too-much-time-on-their-hands snoops at walk.about.com felt the need to let me know with laser-like precision exactly how many miles and steps it would take me to burn off all those calories.  Turns out I need to walk 34 miles or 67,300 steps to wear off my dinner.  From a scheduling standpoint,  I need to cram 6 1/2 days of walking into Thursday.  If I start walking in downtown San Francisco I couldn’t stop until I reached Santa Clara. Fortunately Stanford Medical Center is on the way – perhaps I could drop in for a gastric bypass.

But here’s the worst part, I lied when I took the test.  One cracker with cheese?  I so frequently hog the snack table that my family nickname is “Hoover lips”.  I consider mashed potatoes to be health food and, frankly, I think it insulting to the cook if I pass on all the pies and whipped cream.  Even though the “cook” is Costco.  My real calorie count is probably north of  6,000.

So when everyone gathers on Thanksgiving to eat, watch football and talk about the nation’s pending financial crisis, I will sadly find no room for compromise.  Despite the obvious risks and danger, I will be jumping off the caloric cliff. 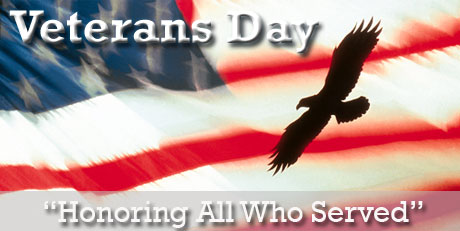 If you’re reading this on Monday morning it may have just reminded you that yesterday was Veteran’s Day.  If you’re reading this after Monday, you may have just been reminded that you missed Veteran’s Day – it’s easy to do.  I’m going to give our blog followers the benefit of the doubt and assume that they were well-aware of the holiday because if you’re reading our blog then you’re among the most intelligent people on the planet.  I don’t know about you, but I heard more than once over the weekend things like, “Is Monday a holiday, what is it Columbus Day or something?”  Veteran’s Day is probably our least known about and remembered federal holiday.   Why is that?  How has it become so easy to marginalize a day that we all should remember and celebrate?

The history of Veteran’s Day perhaps lends itself to its enigmatic reputation.   The holiday was created as a celebration of an armistice signed between the Allies and Germany at the end of World War I in 1918 at the eleventh hour of the eleventh day of the 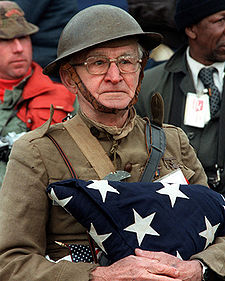 eleventh month, thus Veteran’s Day is November 11th.  However, the Treaty of Versailles, officially ending the war, wasn’t signed until June 1919, but our government didn’t let the facts of history get in the way of the creation of a new federal holiday.

When I recently asked people to explain Veteran’s Day, they mostly said something like, it’s a day to celebrate our veterans.  I think the name gave it away.  When I ask them what they are going to do to celebrate, they usually just looked at me funny and said, “Celebrate?”  Some will say solemnly something like “We’ll celebrate by remembering those who gave their lives for our country.”  I’m tempted to remind them that that is Memorial Day, but I don’t.  After hearing a lot of confusion about this holiday, I decided to compare Veteran’s Day with other holidays in terms of how we celebrate them or what is associated with them and see if there wasn’t some way to get Veteran’s Day on the same level as some of our more ‘popular’ holidays.

So it would seem that in order to make Veteran’s Day more popular, like our other holidays, we need to create more customs around it like traditional garb and food.  Perhaps on Veteran’s Day we should all dress in camo gear and pop open a can of c-rations to feast on. 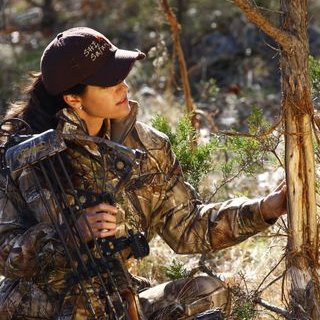 It also might be nice to commit to memory the words of Alan Alexander, who said, “A veteran is someone who at some point in his or her life writes a blank check to the United States of America in an amount up to and including the loss of his or her life.”

Thank you to all who have served – we owe you a great deal.

As I write this we are two days away from the election.  Or, as we say in our house, 48 hours away from re-gaining control of our telephone.  I know we’re not alone in this.  It seems people everywhere are complaining that robo calls have disturbed dinner, naps and even Monday Night Football.  Do you think it’s possible that the machines actually do come alive in the wee hours to plot the most effective ways to torture us?

Most of the calls tout a politician’s virtues.  Or is that a self-cancelling phrase?  In any event, in all the years I’ve been voting I have never received a call from a polling company.  This is truly remarkable given the number of polls that have sprung up.  Remember when Gallup was the only poll?  And remember when nobody paid attention to it?

In an attempt to get a jump on the 2016 race I am thinking of some new polls that people might actually care about.  In my opinion, here’s what I think the pollsters should be asking:

I’m only dreaming here – I’m pretty doubtful we’re going to get asked any of these questions.  But this much I do know: regardless of who wins the election, this country will carry on.  Despite what the ads say, no one individual, not even the President, can wreck it.

As for me, after Tuesday I’m going to sit back and enjoy the peace and quiet of my house.  No longer will I fear the telephone.  But the computer?  That’s a different story.