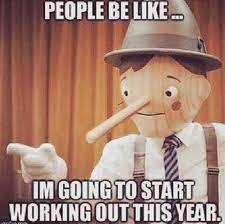 This week, as you’re reading this, I’ll hopefully be cavorting on the island of Maui, which I’m sure you’ll hear about in a couple of weeks.  But in the meantime, I wanted to perhaps provide a public service, or maybe a private service, to those readers who made a list of New Year’s resolutions – things like losing weight, eating better, exercising, being a better ______ (fill in the blank).

I don’t typically make a list of New Year’s resolutions, and when I do, like most of us, I rarely follow through on them.  I was inspired this year to at least make a couple, by listening to Darren Hardy, who was editor of Success Magazine and is a motivational speaker, who emails a daily (Monday-Friday) video, which is only about 4 to 5 minutes long, dealing with various subjects; it is called ‘DarrenDaily’.  I’ve listened to it every weekday morning for the past five years.  I have to admit that many of the sessions are targeted to younger, climbing-the-ladder, leading-a-team, types, but there is also plenty of things for old codgers like me to digest.

While what I’m about to share with you is not revolutionary, in fact, those who do make New Year’s resolutions in some form, may already do this, but it was new to me.  By way of explanation, the following is a brief, edited version of the parable that Darren shared last week regarding goals.

Long ago a tribe from the Andes mountains plundered their rival tribe in the lowlands, stole a baby and took it to their home in the mountains.  The strongest and bravest of the lowland tribesman attempted to get the baby back but couldn’t handle the high altitude and the rugged trails up the mountain.  After days of trying, they gave up and decided to return home.  As they were leaving, they saw a woman coming down the trail with the baby on her back.  In awe, they asked the woman how she did it.  As she continued by them, she said, “It wasn’t your baby”.

The lesson: The power of your ‘WHY’ is the most important part of any goal; all of your WHATs and HOWs will be meaningless until your ‘WHYs’ are powerful enough to overcome the obstacles that you will face in getting to your goals. 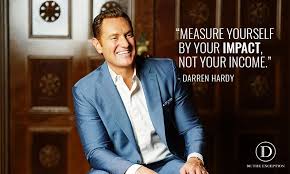 After listening to this, I went back to my two resolutions and saw that I had only written down WHAT I wanted to accomplish this year and HOW, but not the WHY.  Adding the WHY definitely gave the WHAT and HOW more meaning and increased by desire to seriously try to accomplish both of my goals.

If you’re interested in getting Darren’s video publication sent to your email each weekday, you can go to DarrenDaily@darrenhardy.com and subscribe – it’s free.

Wishing you all a Happier New Year.  May you make a positive impact this year.