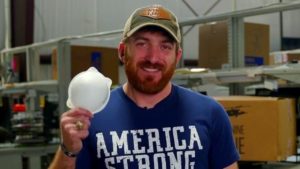 These past weeks have been trying…trying to kill us, trying our patience and trying to test our resolve.  Shoot – bad news was easy to come by even before COVID-19 hit us.  When is the last time you read a paper or watched the news and felt better afterwards?  My guess is it was sometime in the 80’s.  Which is why I want to devote today’s post to just that – people who give us something to cheer about.  I was inspired about a month ago, at the beginning of the virus outbreak, when I saw an interview with Tyler Merrill, the CEO of a clothing company, who stopped all production to focus on making medical grade masks for hospital workers.  He was appalled at the price gouging and competitive out-bidding going on and decided to take matters into his own hands to produce N-95 grade masks.  I was impressed by his generous effort.  His interview recalled something I know down deep – how good the ordinary, everyday citizens are in this country.  I felt bad that I needed reminding but it felt good to know that spirit still exists.  And then last week I discovered John Krasinski’s Good News Channel (or SGN as he calls it) on YouTube and my confidence is the goodness of people was solidified. 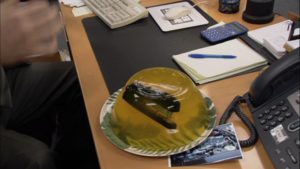 In full disclosure, I have been in love with John Krasinski since his character, Jim Halpert, encased Dwight Schrute’s stapler in a mound of gleaming lime Jello on the first episode of The Office.  I’ve followed his career and enjoyed his personal high jinks, most notably his “prank wars” with Jimmy Kimmel.  If you need a laugh look them up on You Tube.  I’ve always enjoyed him and his particular brand of humor but I have new-found respect for him since viewing SGN.  In March he posted on his Twitter feed that we’d heard enough sad news and that he wanted people to send him some good news stories.  His feed was flooded with them in hours.  Which gave him the insight to know that people are really looking for positive stories and that there is no shortage of them out there.  So on March 29th he launched SGN.  So far he has produced five episodes.  “Produced” might be a bit of a stretch, as even he admits.  He is recording the show from his home office, with the colorful SGN sign his daughters drew as his only graphic. 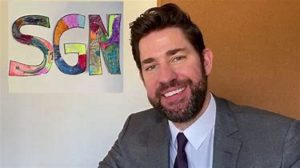 On each show he not only shows his humanity, but that of all Americans.  He lauds the front line health care workers, as well as other essential workers – transit drivers, utility workers, street sweepers.  He has surprised COVID health care workers in Boston with a trip to Fenway Park, complete with VIP treatment.  He has had Brad Pitt to do the weather and when he threw a prom for all high school seniors who are missing out on that rite of passage, he brought in the Jonas Brothers and Billie Eilish.  His interview with his old cohort Steve Carrell was both funny and touching.  But it’s his “Restoring Faith to All Humanity” segments that are worth their weight in gold because they feature ordinary people doing extraordinary things.  One episode featured a teenage cancer patient who celebrated her last treatment with a socially-distanced welcome home in her neighborhood that was so touching that I defy you to watch it without tearing up.  Another episode featured a young mailman who has 400 mostly elderly residents on his route, so he gave each of them a flyer offering to run errands or grocery shop for them in his spare time.  Most of them took him up on the offer.  I could go on and on with examples, but really, you need to watch the show for yourself.  I GUARANTEE that you will feel uplifted and optimistic afterwards.  There is also an SGN Facebook page that you can follow that features daily updates of good stories.  Watch SGN and you will be reminded that there are far more good people than bad out there and most of us are willing to pitch in and help without hesitation.  As one of the International Space Station astronauts said on SGN – “An Earth in crisis is still an Earth worth returning to.” 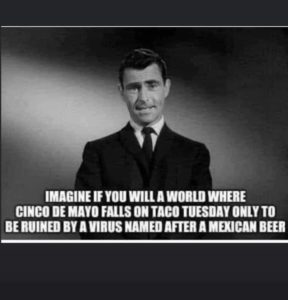 Finally, tomorrow is Cinco de Mayo and I couldn’t resist sharing this meme.  I hope you all find a way to have a Corona without getting Corona!