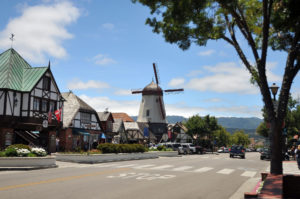 While my brother was taking you on his magnificent cruise we were spending some time over on the Central Coast of California, as we do most summers.  This week we decided to venture down to Solvang, the quaint little town that is known for its Danish heritage and bakeries.  Bakeries?  Shoot, I’ve never been known to turn down a good bakery visit.

“Solvang” is a Danish word meaning “sunny field”, a distinction that will become important in a moment.  The town was founded in 1911 on about 9,000 acres by a group of Danish-American educators who traveled west to establish a Danish community far from the midwestern winters.  So, unlike the rest of the Scandahoovians who stayed up in Minnesota, the Danes sought out sunny fields.  The Swedes and the Norwegians can argue all day about who is smarter but I think we can all agree that the Danes take the pastry on this one. 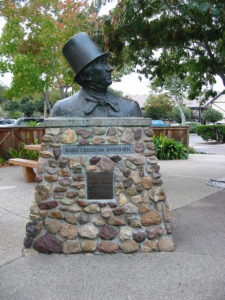 Obviously the Danes were not the first to discover this beautiful area.  The original settlers were the Chumash tribe, whose members still live there today and, among other things, run one of the most successful casinos in California.  Solvang was also home to one of the original California missions, Santa Ines, which was built in 1804 and stood until an earthquake in 1812 destroyed much of the mission and the bell tower.  Over the years it was rebuilt and today is an important tourist attraction.

In 1914 the Danes established a “folk” school in Solvang, one of the few that existed in the US at the time.  The curriculum was designed to teach Danish-speaking students in their late teens how to lead more meaningful lives with an emphasis on lectures, singing, gymnastics, fellowship and folk dancing.  Sounds like a lot more fun than calculus and 4th year Latin.  But with the onset of WWI, Danish immigration to the US dropped and it became harder to support a Danish-speaking school.  In 1921 the building was sold to the Lutheran church and continued to host a wide variety of community functions until its demolition in 1970. 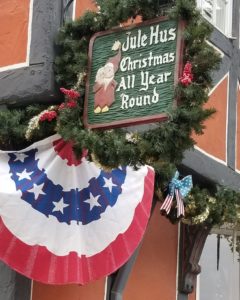 Solvang is now primarily a tourist destination – a million of them visit the town every year.  I think most of them were there the same week we were.  I heard accents from every part of the world and huge bus tours blighted the view of the picturesque buildings.  Most people come to Solvang to see what is advertised as an authentic Danish village reproduced in California – a miniaturized version of the Little Mermaid, a statue of Hans Christian Andersen and four windmills dot the main road through town.  Most of the businesses and homes in town are inspired by the Danish half-timbered architecture, which is what makes it such a unique attraction.  The center of town also features a Christmas shop and when we visited the outside of it was a mash-up of Christmas and the 4th of July.

I would be remiss if I didn’t mention that Solvang also garnered much attention after the movie “Sideways” was released.  Many of the critical scenes were filmed in Solvang, including those at the Hitching Post restaurant which is just three miles outside of town.  The movie bought unprecedented interest to Solvang and the wines that are produced in the region.  Seriously, can you even look at a bottle of merlot and not think of “Sideways”? 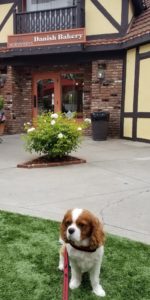 But of course, I wasn’t there for the wine…I was there for the bakeries!  I sat outside Mortensen’s Bakery with Dash the Wonder Dog while my husband went to buy us one pastry to share.  After all, even Solvang isn’t worth totally blowing my diet.  A few minutes later out he came out with two HUGE chocolate-almond pastries.  And, well, not wanting to be impolite to the local Danish bakers, we devoured them both.  I don’t know what they do in Denmark to make the pastry so flaky and delicious – I’m sure it has to do with lots of butter or lard or something I just don’t want to know about.

All in all, it was a fun time, somewhat educational and definitely worth the trip.  I think I need to do more research next week and just might accidentally stumble into another chocolate-almond pastry. 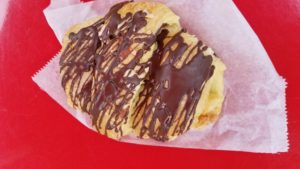