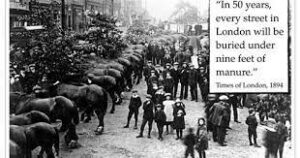 I take you back to the world-wide ‘Great Horse Manure Crisis in 1894’.  Yes, the proliferation of horse manure and the inability to remove it from the streets was considered the greatest obstacle to urban development at the turn of the century.  An article in the London Times stated,

“In 50 years, every street in London will be buried under nine feet of manure.”

Having the luxury of hindsight, we now know that technology, in the form of the proliferation of the automobile, solved this problem.

Why, you ask, I am writing about horseshit?

It seems to me that we have a similar problem today.  Not with horseshit, but with water. Particularly in California where we are experiencing severe drought conditions and devastating fires.  It occurred to me, on my flight to Hawaii last month, that there is a hell of a lot of water in the Pacific Ocean, and if my geography serves me, California has over 800 miles of coastline that abuts to this salty water supply.  I know I’m not breaking news here and there have been attempts at ‘desalination’, but for my money, and I pay a healthy amount of taxes in this state next to the Pacific, we’re literally doing nothing serious to prevent the horseshit from piling up.

Several of today’s solutions seem to be akin to how people were looking at the horseshit problem in 1894.  They are: 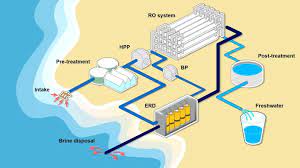 Pipelines – We get oil to California from as far away as Saudi Arabia and Africa (not by pipelines, but by ship – I’m simply making the point that if we really want something we’ll go anywhere in the world to get it); today we import most of our oil from Canada and over 90% of that oil comes via a pipeline.  So why isn’t there a ‘pipeline’ sending some of the excess water we get in Washington and Oregon, to California?  The simple answer is that today, water does not have the same economic panache as oil.  Oil keeps most of our vehicles and industries moving, water only keep us moving.

Making water – it’s just two elements, right? Hydrogen and oxygen, which are both plentiful in our atmosphere.  So why not just ‘make water’?    Because just mixing hydrogen and oxygen together doesn’t make water – to join them together you need energy – lots of it.  So, if we solve the energy problem have we’ve solved the water problem?

To be sure, this is not just a California problem, it’s worldwide, in fact we already have a horseshitesque quote from another country that is surrounded on three sides by water:

So you’re telling me that we can put people on the moon, create driverless cars, get stuff we ordered from Amazon delivered the next day, but we can’t find a way to effectively use a resource that covers two-thirds of our earth?!!!

And speaking of horseshit, if we only used a small percentage of the money our government wastes on really stupid stuff (possibly my next blog rant) to solve our ‘water problem’, we’d have it fixed by Christmas.