As our regular subscribers know, I am our family’s historian.  I joined Ancestry.com ten years ago and was instantly hooked.  I’ve always loved studying history; I find the personal stories of the famous and not-so-famous are intriguing.  Over the years I’ve found some good relatives –  Mayflower passengers, President John Adams and, my favorite, Marilyn Monroe – and some less desirable discoveries – insanity, murder, and horse-thievery.  Regardless, I find myself sucked into the black hole of Ancestry at least once a month, usually on the day I receive my monthly bill.  Each month I question whether to renew my subscription, but then I discover an interesting fact that keeps me going.  It makes me wonder if Ancestry is making this stuff up just to keep me renewing.  This month, I stumbled across a doozy so I’m sharing on the off chance you have nothing better to read this fine Monday morning. 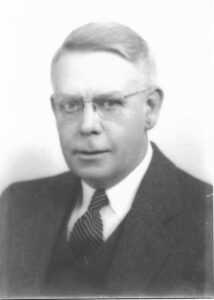 The story starts with my paternal grandfather, who died before I was born.  He was a straight-laced, sober-sided man who was born to English immigrants.  The best illustration of his “Englishness” is a story my grandmother loved to tell of the first time her brothers asked my grandfather to go fishing.  He rose early in the morning and ducked into the bathroom to get dressed.  When he emerged, he had on a suit, tie and vest!  My grandmother burst out laughing but my grandfather failed to see the humor.  Anyway, as stuffy as he was, he was a bit of a family outcast from the beginning because he had been divorced prior to meeting my grandmother.  That fact was never a secret, in  fact, I remember my grandmother telling me about it when I was a little girl.  But what she failed to mention – and what I eventually found out in my family history research – is that he had a daughter, Beverly, with his first wife, Corinne.  I discovered Beverly’s existence in 2011.  By then, my dad had died but I asked my mother if she knew anything about dad having a half-sister.  She casually said, “Yes, he knew about her but never met her.” WOW!  They were born just five years apart and lived within 20 miles of each other for most of their childhood, but my grandfather never introduced them to each other. 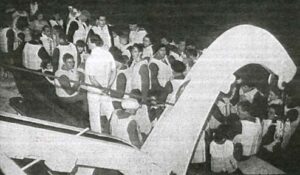 Passengers in lifeboats on USS Washington

I set out to learn more about Beverly but was never able to gather much information.  This week Ancestry sent me a hint about her and before I knew it, I was deep into researching my elusive aunt.  I could tell from census records that she grew up in San Francisco.  But after the 1920 census there is no further documentation on her until 1940.  But that document is a wowzah.  At some point after 1920, Beverly and Corinne moved to France, where Corinne’s grandmother lived.  They lived in peace until World War II broke out.  On June 1, 1940, with Hitler bearing down on France, the U.S. State Department issued a warning that all American citizens who wished to flee France would need to board the  U.S.S. Washington in Le Havre or remain in place for the duration of the war.  It was the last civilian ship to leave Europe.  On June 8, 1940, Corinne and Beverly boarded the Washington, bound for New York.  Their timing was exquisite; just six days later the Germans invaded Paris.  But as it turned out, they were not yet out of danger.  Three days out of Le Havre the Washington was stopped by a German submarine.  The Germans signaled that the Washington had 10 minutes to abandon ship before it would be blown up.  The crew sounded the alarm and the 1787 refugees scrambled into lifeboats.  After some skillful negotiation, the Germans eventually signaled the Washington to continue on.  The captain surmised that the vision of all those civilians in lifeboats gave the German captain pause.  In any event, on June 21, 1940 Corinne and Beverly landed back in the United States.

The trail of Beverly’s life went dark until 1946, when a Pan Am manifest shows her passage from Bermuda to New York and lists her profession as “actress”.  I searched records for actresses by her name but came up empty. How or why she was in Bermuda to begin with is a mystery.  Then in 1949 she left New York for Ecuador, only to return the next year, this time with a fiancé in tow.   She married Louis de Reiset, a French citizen living in Ecuador, in 1950 in New York.  The mind boggles at what a Frenchman was doing in Ecuador or how Beverly met him.  Was it a long lost love from her time in Paris?  Was he a German collaborator during the war that used one of the ratlines to get to South America?  This is the stuff of novels…or my overactive imagination. 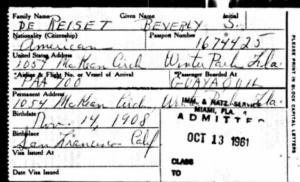 There are no records on Beverly and Louis until 1956, where the log of the S.S. Liberte indicates they traveled from France to New York City.  Again, there is a long period of silence but I think there was trouble in paradise because her next record is an immigration form from 1961 when she entered Florida from Ecuador.  By then, Corinne had moved to Winter Park and it appears from phone book listings that Beverly moved in with her.  In 1963, Beverly filed for divorce from Louis in Florida and she remained there for the rest of her life.   Louis died in Ecuador in 1996.

Beverly died in 2001, ironically, the same year my dad died.  There are no photos of her that I can find, including in her obituary.  But her parting shot did provide a new dimension to her personality.  Her obituary in the Orlando Sentinel, read in part:

BEVERLY S. de REISET, 92, Lakemont Avenue, Winter Park, died Friday, July 27. Countess de Reiset was a member of French nobility. She was an actress and real-estate agent. Born in San Francisco, she moved to Central Florida in 1959. She was a member of Town Club.

WHAT?  A countess?  A member of French nobility?  Her dad was born in New Jersey and her mother in Missouri.  Sure, she had a great-grandmother in France, but a quick search of the noble names of France does not include her family name.  Who knows? Maybe it goes back generations.  What is astounding is that Beverly styled herself as nobility when it was clearly a distinction tied to her short-lived marriage to Louis.  Regardless, I have an image of her swanning through the Town Club, asking everyone to address her as “Countess”.

I wish that I had met Beverly.  I’m thinking a visit with her over a few martinis would yield some really good stories.  All I know is, Ancestry is definitely worth the price.  Where else can you find this level of intrigue for twenty bucks?