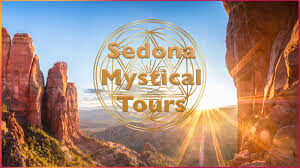 Aside from the beauty of the red rocks of Sedona, this town has also become known for its spirituality, which manifests itself in several basic ways: crystals, which, to some, are believed to have spiritually healing properties that can help you balance your body, mind and spirit. Another is the vortex, which are locations from which intense energy spirals from certain positions on the earth, where again, some people believe these vortexes have the power to heal as they are thought to be swirling centers of energy that are conducive to healing, meditation and self-exploration; places where the earth seems especially alive with energy.  There were times when I thought I was in an episode of the Twilight Zone.  These vortices reportedly (not sure who’s reporting) bring feelings of peace, harmony, balance and tranquility, personal reflection, deep insight and clear mind . . . and in our case a hankering for a martini. 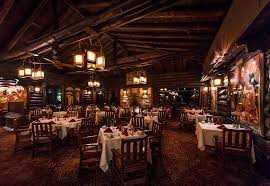 With a dizzying spiritual headache, it was time to move on to the Grand Canyon, one of the Seven Wonders of the World.  To understand the complete history of the Grand Canyon, you’d need to go back about 10,000 years – no, we’re not doing that!  Most of you have been there, so you know it’s spectacular, big . . . grand, even!  After checking in at the Grand Hotel at the Grand Canyon, which, by the way isn’t so grand, we readied for our dinner at the El Tovar Hotel restaurant, which boasts that it’s right on the rim of the Grand Canyon with spectacular views.  They don’t mention that there are only two tables in the entire, dimly lit, restaurant that are by the window with a view and, maybe I should tell them that they really don’t light up the Grand Canyon at night, so if you are fortunate enough to get one of those window-tables, your view is of the lighted sidewalk next to the trash bins.

The next morning it was to the free on-off bus, which was a much better value than the dinner, as we alternated walking and riding between bus stops along the rim – truly spectacular.  My travel tip here is, if you haven’t been to the Grand Canyon, go; if you have been, it really hasn’t changed that much in the last several thousand years, it’s still spectacular!  You may have noticed in the group photo of us here, that the Johnsons are missing.  No, they did not fall into the Grand Canyon, they had already seen this Seventh Wonder of the Natural World and opted to head south to Tucson for this part of the trip. 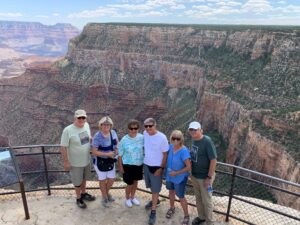 The next morning we headed home, stopping for breakfast at place I would recommend, Anna’s Place in the city of Williams, about an hour south of the Grand Canyon – great old building (another former house of ill-repute) and a great breakfast.  Not wanting to make the trip home too long and boring, we stopped for the night and had a spectacularly funny dinner (the dinner wasn’t funny, some of us were) at Don Vitos Restaurant at South Point, Las Vegas, where we spent the night, paid our dues and drove home in the morning.

A beautiful trip, with beautiful neighbors, beautiful scenery and lots of tourists, but quite honestly it was good to see people out enjoying themselves again – may normal be with us all.