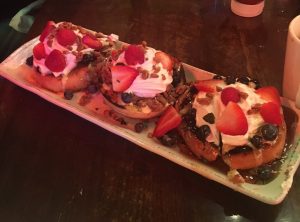 Not the breakfast of Champions!

Saturday – Breakfast at the Sun Diner where it was confirmed, with menu items like Crème Brulee Cinnamon French Toast (which I ordered – photo at left) and Banana Foster Pancakes, that we were not at a health spa eating kale and chia seeds. We also realized that beer for breakfast here is not all that unusual and we certainly didn’t want to draw attention to ourselves by being the only ones not drinking a beer at 9:00 in the morning.

The streets filled quickly with people on this Saturday as we once again found great acoustical music coming from every bar on Broadway, which was virtually every door except those selling cowboy hats and boots. We discovered that Nashville is the Bachelor and Bachelorette Party capital of the world. And most interesting was these partiers’ various modes of transportation up and down Broadway. There was the ‘Fall Off the Wagon’ pulled by a John Deere tractor, there was the ‘Pedal Tavern’, the ‘Party Barge’ and a couple of other ‘boat floats’, one called the ‘Tip Sea’ and another called ‘Ship Faced’. 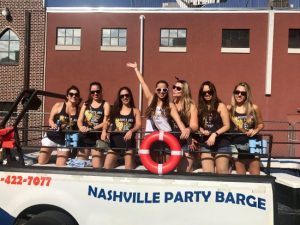 Crawl’, where we met up with other ‘crawlers’ from Boston, Michigan and Indiana. Our ‘Crawl Master’ gave us some history of whiskey, Nashville and Civil War General Joseph Hooker, where he perpetrated the myth that Hooker provided his men with loose women after a hard day on the battlefield and thus the name ‘hooker’ was coined. Not true, but makes for a good story, especially after a few of beers. Our crawl ended at a karaoke bar called the Wild Beaver Saloon, where Pam rode, but not for very long, the mechanical bull. All our ladies got on stage and sang Don’t Stop Believing – you won’t hear that rendition at the next Grammy’s ceremony.   We then decided we needed to get something in our stomach besides alcohol and found a place, don’t ask me the name of it, at that point I could barely remember my own name, but it had a great upstairs patio that overlooked the Cumberland River and Nissan Stadium, home of the Tennessee Titans. Most of us ordered brisket, which we still hadn’t had yet.  Shortly after we ordered our server returned and told us they were out of brisket. Out of brisket!! That should be a felony in Nashville. We ordered something else, I don’t remember what, I do remember that it wasn’t brisket. After dinner we hit Margaritaville and a few more bars on Broadway, because we clearly hadn’t had enough to drink, and finally made it back to the hotel and crashed. No, now I remember we had to have one more drink at the hotel – thank goodness the bar was still open! 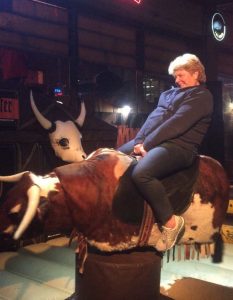 As a switch, the bull slings Pam

Sunday – Up at the crack of 10:30 – 11:00 and met a friend of Patrick’s and his family for breakfast at the Southern. Yes, Patrick has a friend everywhere; this is the same Patrick who ran into someone he knew when we were in Kathmandu, Nepal! There was a slight sprinkle after breakfast, but not enough to keep Linda and me from doing one last lap around Broadway. We walked up to Printer’s Alley, which at the beginning of the 1900s was home to a thriving printing industry, with two large newspapers, 10 print shops and 13 publishers, and by the ‘40s it was the hub of the nightclub scene in Nashville, but now it’s pretty quiet.

Having finished a big breakfast an hour or so ago, Linda asks if I still want to get some brisket; we agreed that if we could find it somewhere before we leave, we’d have to force it down. She recalled the name of a spot 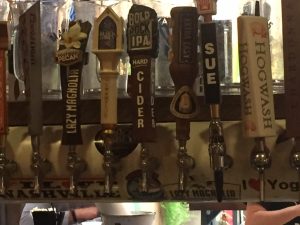 that was recommended to her, called Martin’s BBQ Place.   We find it and there is a long line to get in. We say we are just going in to look around – which we were, honest, and squeezed by everyone in line and once inside climbed the stair to an upstairs patio and bar, which was not very crowded. We ask the bartender if we could order a brisket here, he says yes, so we waited for our brisket and ordered a beer from their interesting selection – Hog Wash and A Beer Named Sue to name a frew. After a four-day search, we finally got our brisket. It was delicious!!! We saved some and brought it back to Patrick and Pam, with whom we were flying home.

Nashville Travel Recommendations: If you’re over 40, absolutely get to the Grand Ole Opry for a radio show, cruise Broadway during the day, forget about the diet you’re on and have brisket early and often.