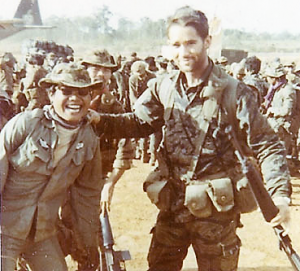 People frequently ask me why Bob and I write this blog every week.  I’m not sure whether the emphasis is on the “why” but I’m choosing to believe that they are just interested in our motivation.  After all, we have been posting something weekly since August 2012, without missing a deadline and we have received exactly $0 for our efforts.  Sure, some posts are better than others (Bob’s trips, for example) but we have yet to resort to reporting on our root canals or colonoscopies.  The truth is that both of us love to write. We also love each other and this weekly exercise requires that we stay in frequent contact.  To us, that’s reason enough to pound something out on a regular basis.  But two weeks ago a third reason unveiled itself in the person of Bridget Lesnick.

I received a Facebook Messenger note from Bridget saying that I don’t know her but that she had read my blog about the boys from Novato High School who died in Vietnam and she wanted to ask me a few questions.  I was instantly on alert.  After all, Facebook is not exactly the most trusted company these days and I had visions of a Nigerian prince asking me for money.  But Bridget went on to explain that she was participating in a GORUCK endurance event honoring members of the Special Forces who had died around the date of the event.  She had selected Jim Gribbin, one of the boys I write about each Memorial Day, who died on March 17, 1970.  She reached out to me in hopes of learning more about him so she could tell his story to her fellow endurance participants.

Before I answered her message I decided to look up GORUCK to see if it was really a “thing”.  Sure enough, it not only is a thing, it is quite a remarkable thing.  The GORUCK company manufactures military-quality gear for civilian use.  It was founded by Jason McCarthy, a man who enlisted in the Special Forces as a result of 9/11.  His is an inspiring story that you can read about on the company’s website here: https://www.goruck.com/our-founders-story/. 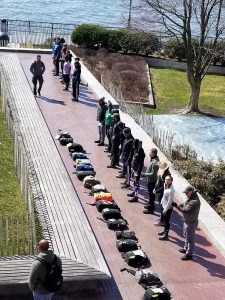 Jason has enlisted what he refers to as “the Cadre”, made up of former Special Forces members, to lead GORUCK events across the United States aimed at helping individuals and teams overcome adversity and lead active, empowered lives.  The events range from Light to OH MY GOD WHAT WAS I THINKING? (my term, not theirs).  Every event entails moving with weight on your back, combining strength and cardio.  Each team is expected to organize itself and choose a cause that makes their community a better place in which to live.

So…once I learned about GORUCK I responded back to Bridget, with a renewed sense of respect.  I told her a bit more about Jim and sent her photos from our high school yearbook of him in his football uniform and as an officer of a service club that was raising money for a poor village in Mexico.  Looking back, and knowing that Jim would eventually succumb to wounds suffered trying to rescue his squad, it seemed his desire to serve and protect others was a life-long trait.  I asked her to let me know how it went and last Friday I heard back from her, complete with photos. 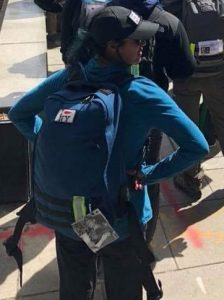 Bridget with her ruck and photo of Jim

She said that the event was great – she actually completed TWO events that spanned 17 hours and covered 25 miles of New York City. She said that she proudly wore Jim’s photo on her ruck and honored him in the best way she knew how.  Her ruck weighed 30 pounds and she wore it the entire – freezing – night.  She started the first event at 7 p.m., finishing up at 6:30 a.m.  She then took a breather and did the second event from 10 a.m. to 3 p.m.  Every person in her group had selected a member of the Special Forces who had died within the dates of the event and they all wore a photo of the person on their ruck.  I can barely get my 10,000 steps per day completed so to say that I was impressed by Bridget and her team’s accomplishments is a vast understatement.

Two weeks ago I knew nothing about GORUCK or their events.  I now know a bit more and my gratitude and admiration are endless.   I admire Jason and his team for their work in our communities.  Oftentimes we don’t hear about the “good” news going on everyday by ordinary people who do extraordinary things.  I am especially heartened by Bridget and all those like her that care enough to remember those that we’ve lost in war.  I wish that Jim’s parents were still alive so they could see that their son’s memory is being honored in this way, 48 years after his death.  But for now, it’s enough for me to know that one of my high school mates is remembered and that this blog, in part, has helped in that.