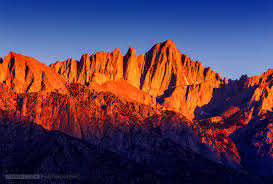 It was not a great night’s sleep, thinking about making sure we’d wake up on time, and hoping all conditions would be right for our assault on Whitney.

Three-thirty a.m. found us getting dressed for the day’s hike, putting on our headlamps, eating a small breakfast of an apple, some nuts and some trail mix, going to the trail-head, where there was a scale to weigh our packs (about 25 pounds – mostly water), then heading up the mountain.

We hiked about two hours in total darkness, before we witnessed a beautiful sunrise behind us exposing our goal for the day – the top of Mt. Whitney.  We were fortunate that we had a perfect day, not too hot, no rain, no lightning, no bears and no altitude sickness . . . so far. 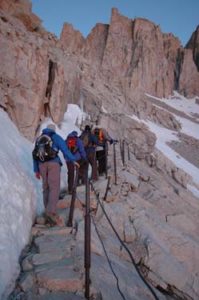 We knew from our training that we hiked at different paces, with Mark ‘Rabbit’ Johnson, being the fastest.  It was hard for him to slow his pace down, so he ended up joining another group of hikers that were ahead of us and hiking more at his pace.  Sullivan, Michael, Pacelli and I stayed together until we reached Consultation Lake at Trail Camp where we filled our water containers, put in some water-purifying pills and left them by the lake to pick up on our return trip.  It was here that Bob ‘Bobby MacD’ Pacelli, a diabetic, said that his blood sugar was not responding well to the altitude and decided that he would not go any further.  Since we did not want anyone hiking the trail alone, Patrick said that since he had already done the hike, he would hike back down with MacD.  Mark was ahead of us, so after a short rest, Rick and I looked at each other, then at the switchbacks ahead of us and said, “Let’s do this!”

The ’99 Switchbacks’ are probably the hardest part of the hike.  You’re over 11,000 feet, you’ve been hiking for 4-5 hours and it’s back and forth until you reach ‘Trail Crest’ at 13,600 feet.  Rick and I are about half way up the switchbacks and Rick says to me, “I’m feeling a little dizzy”.  We stop and sit down.  I know Rick is not fatigued, he is in the best shape of any of us; he runs marathons, works out regularly and has ‘zero’ body fat.  We sit down at the end of one of the switchbacks and realize that he may be suffering from ‘altitude sickness’ and we need to make the tough decision to either head back down the mountain or continue the hike.

After a few minutes, Rick says, “I want to go on; I’ll be fine if we go slow – you lead and I’ll follow.” We take our time getting to the end of the switchbacks at Trail Crest. We have reached the crest of the range and can now see Guitar Lake on the western side of the Sierra Nevada Mountain Range.  Rick is doing OK, but we take a short rest at Trail Crest then continue along the ridge, running into Mark on his way back down.  We hit a little snow, but soon reach the summit.  Rick says he feels fine, but he looks a little pale.   We sit down, exhausted, on a large, flat granite boulder at the summit of Mt. Whitney and pull out our lunch and start to eat as we enjoy the spectacular view, but realize that we’re only half way through the hike – it was the hardest part, but even so it’s a long time on your feet.

I’m two bites into my sandwich and Rick says, “We gotta get out of here”.  The altitude sickness had returned at 14,505 feet.  So we throw everything into our packs and head down the mountain – rather quickly.  As we descend, Rick’s stride quickens and color returns to his face. 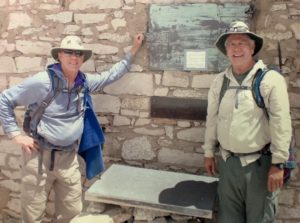 The Greeter & Avalanche at the Smithsonian building at the summit

We’re about half way down the mountain when we run across a high school-aged boy sitting on the side of the trail.  We stop to ask if he is OK and he says he is just exhausted and his group left him there.  Rick, now feeling better than ever, puts the kid’s pack on top of his and tell the kid to get up and we’ll escort him down the rest of the way.  The three of us finish the hike around 4:30 in the afternoon –13 hours after we started.  We get the kid back to his group, and we find ours, who have packed up our campsite and loaded the van.

‘Wheels’ Affentranger, takes our packs and loads them into the van as we head down Highway 395 for home.  Bobby MacD insists we stop at a McDonald’s for dinner on our way back.

We were exhausted, so not much lively conversation on the way home, just a great feeling of accomplishment with great friends.