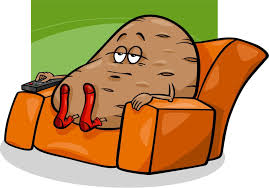 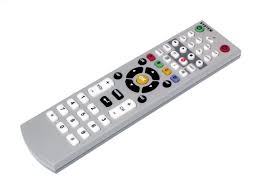 “If I ever get out of here, I think I’m going to Katmandu” 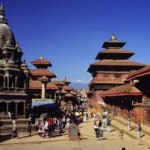 If Saturday’s Air Canada Flight 55 out of Los Angels to Vancouver was on time, I will indeed be ‘out of here’ and in Kathmandu by the time you’re reading this. No, LA to Vancouver didn’t seem like the most direct way to me either, but it actually was the first leg of the shortest (time-wise) that I could find . . . and afford – 26 hrs 33 mins (My back hurt just writing that). From Vancouver to Guangzhou, China (which is about 95 miles northwest of Hong Kong) and from there into Kathmandu, Nepal. Why Kathmandu, you ask? It was a 70th birthday gift from my wife. No, it was not a one-way ticket! Like most things she buys, she got a ‘deal’ on Groupon – a 12-day trip for two to Nepal, which included a 5-day trek into the Himalayas. Not being a hiker herself, she is not part of the ‘for two’. So I’m with my hiking buddy, who I’ve done lots of hikes with, including Mt. Whitney and Half Dome, Patrick “Trail Boss” Michael. He’s a good friend & neighbor, a good hiker with a quick smile and an engineer by trade, so we have checklists for our checklists. We had both been looking forward to this trip for several months, when after we told a 70+ lady our itinerary, she said that she and several of her friends did that same trip last year. We thought, ‘This may not be quite the adventure we were looking for’, so I contacted our travel agent and asked if there was a little more challenging trek we could take. She answered in spades. We’re now spending 8 days trekking in the Himalayas, with a Sherpa guide and a porter (we’re not sure if that’s a person or an oxen) and reaching altitudes of just under 14,000 feet. 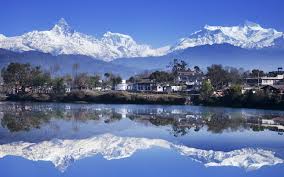 We should have arrived in Kathmandu around 10:30 Sunday night and be flying out of Kathmandu early Monday morning (because we needed some more flight time!) into the city of Pokhara (photo at right) where our trekking will begin that afternoon. Over the next several days we will be working our way up to Annapurna Base Camp at an elevation of 13,500 feet. Annapurna, at 26,545 feet is the 10th highest mountain in the world, but ranks #1 as the most dangerous to climb – it has a summit-to-fatality ratio of 38% (By contrast, Mt. Everest has a 9% ratio). That’s only one of the reasons we’re only going to Base Camp, no fatalities there unless it’s from the dal-bhat-tarkari soup. We’ll also be visiting the beautiful Chitwan National Park, doing some river rafting, taking an elephant ride safari, where we hope to see the elusive Bengal Tiger as well as traveling by ox cart through an elephant breeding camp to our hotel. I’ll be used to the oxen’s pace having driven in LA commute traffic.

Nepal is 12 hours and 45 minutes ahead of Pacific Daylight Time (Yes, 45 minutes, just another oddity of this part of the world), so I’ll try to sum up my activities at the end of my day and post so you’ll get it that morning. I’ve read that wifi can be very dodgy over there, so if you don’t hear from me I probably just can’t connect . . . or had a very boring day. We’re crossing our fingers that the monsoons don’t come earlier than expected . . . oops, wait a minute, I just checked the 10 day forecast for Nepal: Rain and thunderstorms everyday for the first week.

It’ll be an adventure!