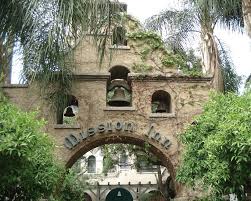 A mountain to climb and a visit to an iconic California hotel that has been rumored to be haunted was all I needed to inspire my trip to Mt. Rubidoux and the famous Mission Inn, just 45 minutes away in Riverside. I had no visions of having a paranormal experience or even finding the secret catacombs that supposedly connected these two landmarks which are a mile apart, but it might be fun looking for them and I thought you’d enjoy the journey. 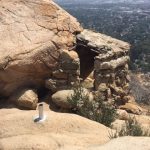 My day starts with the hike of Mt. Rubidoux, to be honest, it was more of a stroll than a hike, as it was only about 3 miles of paved trails with a total elevation of 1,399 feet – women pushing baby carts passed me by. The mountain looks like a small geological burp – a boulder outcropping rising out of an otherwise flat terrain. In 1903 the mountain was the site of the first non-denominational Easter sunrise service in the U.S., so it’s got that going for it. I hiked every trail and non-trail on the mountain looking for the entrance to the secret tunnel that leads to the Mission Inn. Just as I was about to give up I discovered an out-of-the-way rock formation that looked like an entrance AND it had what looked like an air duct pipe coming out of it. As I started to move towards it, a female park ranger asked where I was going. I looked at her knowingly, hiked up my pants and gave her that Barney Fife sniff and said, “I found it, didn’t I?” She replied, “You found an old sewer line, now move on.” 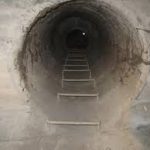 Unable to use the ‘secret passageway’, I was forced to drive the mile to the Mission Inn for my docent-led 75-minute tour – well worth the $13 price tag I might add. The docent, who fortunately had a great sense of humor, introduced herself and asked our group if there was any part of the Inn that was of particular interest to us. I saw this as my opportunity to broach the subject of the ‘secret passageways’ and asked, “Are we going to get to see the passageways, catacombs, tunnels or whatever that connects Mission Inn with Mt. Rubidoux?” The docent rolled her eyes, ignored the question and started the tour. 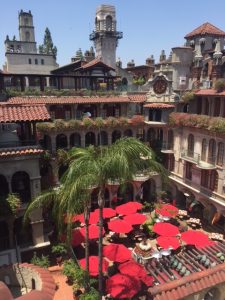 We are first told what the Mission Inn is not; it is NOT part of the chain of 21 historic Spanish Missions in California, but rather it was built as a small hotel by Christopher Columbus Miller in 1876, and because Miller was a world traveler (not a surprise with a name like Christopher Columbus), the 30-year construction of the inn was influenced by many architectural styles: Spanish Gothic, Spanish Colonial, Moorish, Renaissance and Mediterranean Revival to name just a few. To my layman’s eye it looked like six committees from six corners of the earth worked on this project independently and Miller just glued them all together for the finished product, but somehow it works – it’s magnificent!

If you’ve never heard of, much less visited, the Mission Inn, let me start your edification of this unique hotel with a list of a few of the august luminaries who have stayed there.

Why so many presidential visitors you ask? Not that I’m obsessed or anything, but I think it goes back to those tunnels as a security measure; if we ever had an emergency that required us to go to ‘DefCon4’ while a president was staying at the Mission Inn, they would have a secret underground escape route.  OK, maybe that’s just the conspiracy theorists in me talking.

Numerous movies have been shot there.

Will Rogers probably defined the Mission Inn best when he said . . .

31 comments on “The Mission Inn and Mt. Rubidoux Tunnels?”