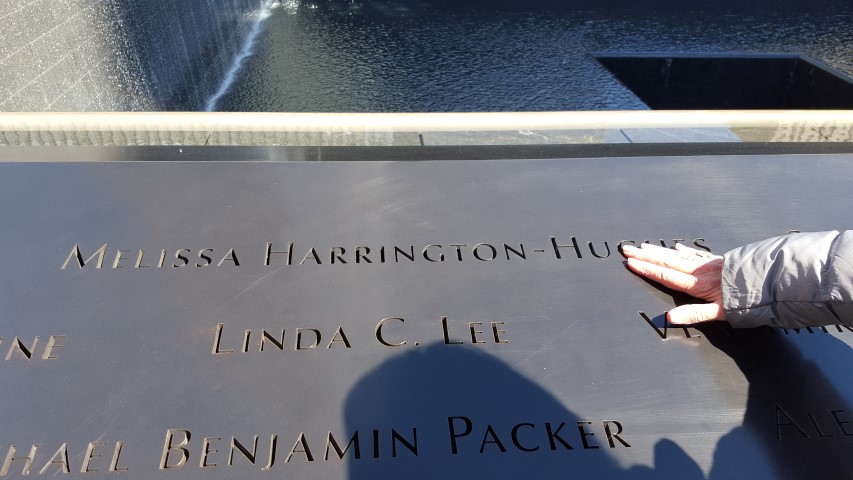 This week, as we approach the 20th anniversary of 9/11, I am posting the memorial I wrote on the 10 year anniversary with updates on a surreal encounter and a promise kept. 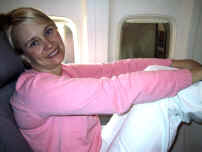 Melissa Harrington Hughes died at the World Trade Center on September 11, 2001.  She didn’t work there; she was on a business trip for her San Francisco-based technology firm. She was an extremely accomplished 31-year-old, who had a passion for life and adventure.  Melissa married her sweetheart, Sean Hughes just a year prior to her death.

On that fateful morning of September 11 she was attending a meeting on the 101st floor of the North Tower when the first plane struck just six floors below her.  Many people remember her for the harrowing voicemail she left for Sean minutes after the building was struck.   In that voicemail she said, “Sean, it’s me. I just wanted to let you know I love you and I am stuck in this building in New York. A plane hit or a bomb went off – we don’t know, but there’s a lot of smoke and I just wanted you to know I love you always.”

The bank where I worked had several divisions housed in the World Trade Center; three of our employees died that day.  But somehow, amongst the overwhelming tales of tragedy on September 11, Melissa’s is the one that stood out for me.  I was not alone.  Melissa’s final words resonated with a lot of people; thousands wrote on her memorial website.  Her phone message to Sean was played on news casts numerous times in the weeks following 9/11.  Each time I heard it I teared up .

In her voice I could sense so many of her emotions: fear, panic, bewilderment.  But mostly, in her final minutes on earth, she wanted Sean to know that she loved him.  I thought about her, and all of the people that died that day, who went off to work as they normally did.  Kissing a spouse or child good-bye, grabbing a cup of coffee, making plans for the weekend ahead.  And none of them came home.  Plans and hopes and dreams were gone in an instant.  Sean Hughes said that he and Melissa were excited about their future and talked about all the things that newlyweds do: moving to a new home, getting a dog, having children.

There were thousands of sad stories that day about love lost and children orphaned, but somehow Melissa’s story, above all the others, resonated with me.  I think that was partially due to some life experiences we had in common.  I had also made business trips from San Francisco to the North tower at the World Trade Center.  I remember navigating its Byzantine elevators and escalators as I rushed to early morning meetings, just as Melissa must have done that morning.  Melissa’s wedding photo also brought back memories for me; she and Sean were married in Napa, California, close to where I grew up, so I knew she also appreciated that beautiful part of the country.  But it was more than the similar business trips and her wedding venue that stayed with me; it was her voicemail to Sean that was seared into my brain. 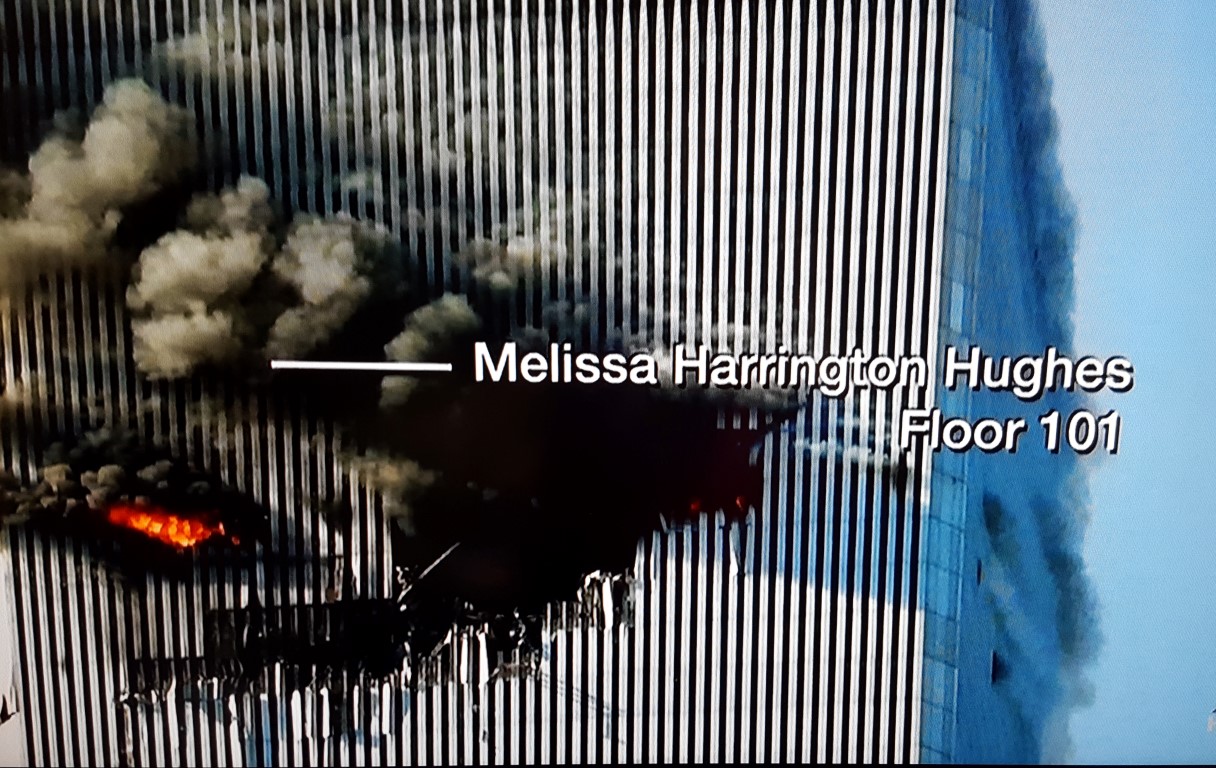 Her final words to Sean started me thinking about my own life.  My husband had taken early retirement in 1996.  By 2001 he was anxious to travel, spend time with our new grandson, and enjoy time with friends.  I wanted to continue working.  But I kept thinking about Melissa’s message.  What if that had been me?  Is that how I would want to die, without ever having enjoyed the life my husband and I had worked so hard to build?

The weeks following September 11 were frightening and incredibly busy for me.  My division of the bank received bomb threats in our major office buildings around the country and we were constantly on alert. Of course, all of the threats were false, but that didn’t lessen the hysteria of my employees who were in those buildings.  I understood – my office was on the top floor of our Los Angeles headquarters and I jumped every time I heard a plane or helicopter fly by.  After a month or so, I began to hope that the turmoil would pass and that my life would get back to “normal”.   But then I thought about Melissa.  Life doesn’t get scripted.  I knew that the odds of being killed in a terrorist attack might be low, but there were no guarantees against a car accident or a terminal illness.

So the first week of November, after the initial frenzy died down, I told my boss that I wanted to resign.  We negotiated that I would stay until March, which I did.  I have never regretted that decision and would not trade all of the memories and experiences I’ve had since then for any amount of successful projects or compensation I gave up.

The author Judith Viorst once wrote that it is the small moments in life that make it rich.   Melissa made me realize that I needed to grab the small moments while I could; that sitting with my husband every morning, sipping coffee and watching the news, is a gift not to be squandered or go unappreciated.

So to Melissa Harrington Hughes: thank you.  Someday I hope to get back to the new September 11 Memorial where I will touch the steel engraving of your name.  And in the hollows of those letters, we will finally be connected.

2016 Update:  This past March I went to New York with my niece and her two daughters.  Visiting the National September 11 Memorial and Museum was the highlight of the trip.  When I was planning our visit I read that it was preferable to purchase tickets in advance,  so on February 24 I ordered ours from their website.  On that same day I received a message that I had a new comment on my 2011 post about Melissa.  I thought that was a coincidence – that maybe something that I had typed when researching the September 11 Memorial had caused an old comment to be recirculated.  But it wasn’t an old comment  – it was this:  “I came across your blog after my son and I just prepared a required oral presentation for his English class about a life event of mine that had great impact. I think of Melissa almost every day –  I was her best friend since childhood.  She was a shining light and people were drawn to her. I miss her and the memories are still clear with detail. Thank you for seeing how her passion, love for life, and love for her husband and family was that shining light, even if it was her last words. She called her Dad and Mom and Sean from that burning building because she loved them deeply. She is well remembered and will never be forgotten.”  I still get chills when I read this note and think about the timing of it.  There are no coincidences in life, of that I am sure. 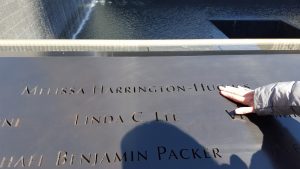 On March 30 I was able to fulfill the promise to myself that I would visit Melissa’s engraving at the Memorial.  Her name is carved into Panel N-22 on the large reflecting pool that stands in the footprint of the former North Tower.  I put my hand on her name and thanked her once again for all that she has meant in my life.  May she rest in peace.

Note: On Saturday, September 11, I will publish my piece about the September 11 Memorial and Museum.