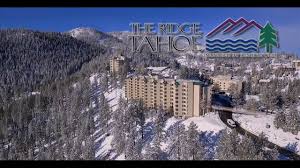 About a month ago I was notified that we had a timeshare week given to us by Interval International during Covid, that was going to expire by December 24th of this year.  We had just returned from our Mexican cruise and with the ‘holidaze’ fast approaching and air travel becoming less and less attractive, it seemed as if the week would be wasted – unless we could find somewhere that we wanted to go, was within driving distance, and was available between Thanksgiving and Christmas.

As I surfed Interval’s available online options, I came across The Ridge – Tahoe, which sits on a ridge (I’m guessing that’s where they got the name) above South Lake Tahoe by Heavenly Valley Ski Resort.  Growing up in northern California, I have many fond memories of Lake Tahoe, as my family started weekending and vacationing there when I was about eight years old (Yes, that was back when the earth was still cooling).  I had my first ‘sort of’ date there when I was in junior high and older brother Jack, who was in high school, brought his girlfriend for a stay with our family at ‘The Lake’, and she brought along her younger sister, who was a year younger than me.  We met at Tahoe Tavern and watched a movie.  I don’t remember what movie, and it wasn’t because I was preoccupied with my first date, I was petrified and probably was busy eating popcorn and didn’t even offer her any.  Sorry, Meg Howard, wherever you are. 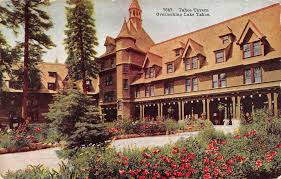 Tahoe Tavern was a classic!  It was first opened in 1902 as a luxury hotel just outside of Tahoe City, at the northern end of the lake. It had 225 rooms and a casino – yes, a casino in California.  You could get there by road, rail, or raft and its opulence attracted San Francisco’s high society.    The resort’s dress code for lunch and dinner became so formal that a dress and heels were required for women and a coat and tie for men.  Aside from the very high-end restaurant and theater, there was a bowling alley and a bar with a beautiful view of the lake.  Unfortunately, it burned down in the mid-60s, so I’m glad I got a chance to see this magnificent hotel.  Condos have been built on the property since and it’s not quite the same; no, it’s not even close to the same.

But I digress.  Linda and I left this past Saturday afternoon to drive up picturesque Highway 395 on the eastern side of the Sierra Nevada mountains.  We spent the night in beautiful Bishop so we could drive up to the lake and be in front of a television by Sunday afternoon so we could watch her Vikings play my 49ers. 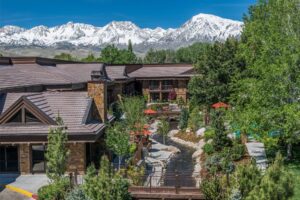 We got to Bishop and had a great dinner at Whiskey Creek restaurant, which has been there since 1924.  We stayed at the Creekside Inn in Bishop, which I would definitely recommend, although I have no complements for their complementary breakfast – go next door to the famous Schat’s Bakery & Restaurant.

The Sunday morning drive from Bishop to South Lake Tahoe is one of the most beautiful in the state, particularly on a crisp cloudless morning which shows the spectacular snow-capped Sierra Nevada mountains.  We arrived in time for the Viking-49er game, which I was a little happier about the results than Linda.

Our time at Tahoe next time

9 comments on “Tahoe – The Lake, The Ridge and the Tavern”