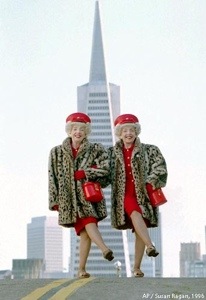 San Francisco icons generally come in steel (the Golden Gate Bridge) or concrete (Coit Tower). But sometimes they appear in flesh and blood and that is certainly the case of Vivian and Marion Brown, otherwise known as “the Brown Twins”.  The picture at left, in their bright red suits and trademark leopard coats, shows them at the height of their fame, when the world had discovered them.  But those of us who “knew them when” had known they were special for a long time.

In 1977 I started a job in the Financial District of San Francisco. It was a fun time – before über traders and panhandlers took over the streets. And, let’s face it, it is one of the best cities on Earth to experience quirkiness.  One particularly nice day I took a walk from my office on Montgomery Street up to Union Square.  Somewhere on Post Street I spotted two middle-aged women, identical in looks, dress and cadence. I did what most people do when first confronted by the Brown Twins; I did a double take, watched them as they walked the rest of the block, and then grinned from ear to ear.

Turns out that the Brown Twins came to San Francisco in the 70’s from Kalamazoo, where they were born and raised.  They were co-validictorians of their high school class and both went on to earn a teaching credential.  After three years of “that low-paying job” (as they described it), they moved to the City and became secretaries.  Except for six months of their life, they dressed identically every day.  They always lifted their forks in unison and always walked in lockstep.  Neither of them married, although they did date twin brothers they met at a twin convention back in Michigan.  The romances fell apart when Vivian and Marion unilaterally decided to switch dates.  The twins would spend the rest of their lives together – the pleasure of each other’s company was more than enough to provide them with satisfying lives.

Over the next 25 years I worked on and off in the Financial District and in all that time I never lost the thrill of seeing the twins out for their stroll.  Some people thought it brought good luck to catch the twins walking down the street.  Part of the fun of seeing them was watching other people spot the twins, usually for the first time.  The result was always the same – big smiles, looks of bemusement and sometimes a request for a photo.  The Browns never refused a request.  The picture below beautifully captures the typical “what the heck was that?” double-take that the Browns elicited: 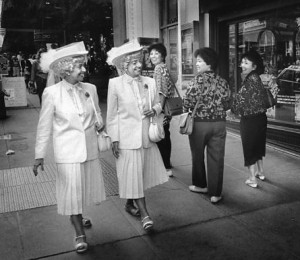 They eventually became so well-known that they were included in all things San Francisco: socialite parties, grand openings and civic celebrations. Everything except “Beach Blanket Babylon”.  The producers said they never included an act depicting  the Brown Twins because no two actresses could ever pull off on stage what the Browns did every day on the street.  The Browns hit the jackpot in 1988 when they were featured in a Reebock commercial.  After that they became frequent guests on talk shows and were featured in commercials for IBM, Payless Drug, AT&T, Dell, Apple and Joe Boxer shorts.  Richard Branson, founder of Virgin Atlantic, was so enamoured by them after they shot the commercial for his airline that he flew them first class to London for a shopping spree at Harrod’s.

But like all things in our fast-paced world, the public lost its infatuation with the Browns.  They still strolled the streets of San Francisco, in their leopard coats but they slowed down.  Finally, last July, Vivien fell and was taken to the hospital.  The doctors discovered that she was suffering from Alzheimer’s disease.  Marian, ever faithful to her sister, had been trying to care for her on her own.  The sad truth was, like many elderly people, they simply didn’t want to be apart and didn’t have the money for adequate care.  The residuals and appearance fees had dried up long ago.

True to form, when the citizens of San Francisco heard of the twins’ plight, they came to the rescue.  Money poured in to help pay for Vivian’s care, from rich and poor, famous and not famous, literally from every part of the city.  People sent money for Marian’s daily pizza, some offered to drive Marian to visit Vivian each day, others organized fund-raisers.

But in the early hours of January 9th, Vivian succumbed to her illness.   She was 85.  Which means that for the first time in 85 years, Marian is all alone.  It’s hard to imagine how hard that must be for her, literally losing a part of herself.  I hope that she can take some solace in knowing that for many years she and Vivian brought joy to anyone who saw them.  For me, the Brown Twins will always be a part of what made working in San Francisco a cherished memory.

4 comments on “THE DEATH OF A SAN FRANCISCO ICON”