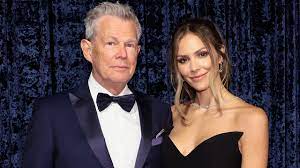 Linda and I had a meeting with ‘The Hit Man’ in Las Vegas last weekend.  No, our lives were not in danger, we went to see a David Foster show.  Some of you are saying, “Who’s David Foster?  Isn’t he the guy that wrote “My Old Kentucky Home”? No, that’s Stephen Foster, and although a gifted musician, he died in 1864.  Oh, you mean Foster Brooks.  No, he’s the lovable drunk that had no musical talent and is also no longer with us.

OK, for those not familiar with this Canadian musical genius, composer, arranger, and producer, here’s a quick bio: He has won 16 Grammy Awards, three for Producer of the Year, he has three Emmy nominations, three Oscar nominations for ‘’Best Original Song”, and a Golden Globe Award.  He has created hit songs and award-winning gold and platinum albums for a diverse array of artists, including: 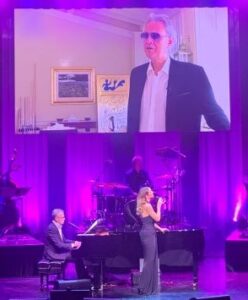 His show, An Intimate Evening with David Foster – HITMAN, at the Wynn in Las Vegas, featured his 5th wife, Kathrine McPhee, who was runner-up on the sixth season of American Idol and is 35 years younger than the 75-year-old Foster. He is a classically trained piano player who makes fun of his own singing, because he really can’t sing.  He was also joined on stage by two fabulous singers, Daniel Emmet and Pia Toscano, both past contestants on America’s Got Talent, who you will hear more about in the near future, because they are both very, very good.  Also joining him and singing via live video was Andrea Bocelli, Josh Groban and Kenny G (not singing, but playing his incredible saxophone).  As he banters back and forth with his guests, you just feel like your sitting with him in his 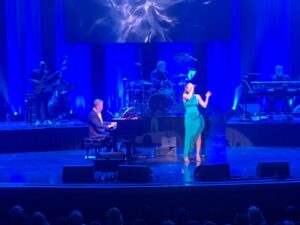 piano room as he talks about his amazing life’s journey.  The combination of great music, great story-telling and witty comedy throughout, made it one of the best shows I’ve ever seen – we were totally entertained every minute!

If you’ve not seen the documentary on this unique genius, go to Netflix and find Off the Record, it is an amazing story; very entertaining – he is a character!

The cherry on top of our quick trip to Las Vegas was that my 49ers were playing the Thursday night football game and I was able to win a nice parlay bet. Sometimes Christmas comes early!

5 comments on “A Visit from ‘the Hit Man’ in Vegas”