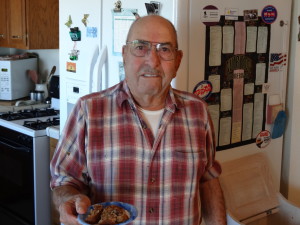 The window on being able to sit down with World War II veterans and hear, first hand, about their combat experiences is closing very rapidly (They are passing on at a rate of about 600 per DAY!). The window on sitting down with WWII vets who are as sharp as ever and remember everything is significantly smaller. I had that rare opportunity last week when friends Jack and Chuck and I traveled to the small, California high desert town of Llano (pronounced, Yon-oh), outside of Palmdale, where I was introduced to the incredible, unassuming Adam ‘Earnie’ Earnhardt. Earnie is 88 years old and is in amazing shape, both physically and mentally. He plays golf four days a week and has 8 Hole in Ones to his credit . . . so far! He makes award-winning jams (He just won 7 blue ribbons out of 8 entries at the recent Antelope County Fair) and gives them away – the three of us walked out of there with over a dozen jars of ‘blue ribbon jam’! He makes lots of other stuff too; he greeted us with some delicious homemade zucchini bread. When he’s not putzing around in his kitchen, he is an avid reader – he just finished reading Killing Lincoln and is now reading Killing Kennedy. He loves working on jigsaw puzzles (difficult ones), and he proudly displays his large collection of Playboy Magazines (He used to have every edition ever printed, but some were mistakenly thrown out when he moved). He laments, “The one with Marilyn Monroe in it was in the group that got thrown out. Damn, it’s worth about $5,000 today, not that I would have ever sold it!”. His younger years were spent growing up first in North Carolina and then in Pennsylvania; he is related to the famous Earnhardt car racing family.  He explains his leaving the south this way: “I had to move out of North Carolina to keep from marrying someone I was related to.”

He was drafted right after high school in 1943 and was asked what service he preferred. “I told them I wanted to go into the Army Air Corp, so they stamped my papers and said, ‘You’re in the Navy’!” He lights up when you ask him about his military experiences. He fetched a couple of old scrapbooks for us to look through and talked about his time as a belly gunner in a Navy B-24 bomber. While he did on occasion fire the two 50 caliber machine guns from his bubble turret on the belly of the aircraft, mostly he was on unescorted reconnaissance missions taking photographs of enemy territory. His base pay was $21 a month. Flying out of Wake, Okinawa and Kwajalein, he flew missions over China, Korea and mostly Japan and in fact was in the air and personally witnessed the dropping of the atomic bomb on Nagasaki. He attributes his inability to have children on the radiation he was exposed to that day. But in salty language, befitting a sailor, he says he never sought compensation for any disability and has little time for today’s whiners or those concerned with political correctness.

After the war he became a carpenter, but when it was discovered that he was an expert at reading blueprints, he was recruited to help build hydroelectric dams all over the world, which he did for the remainder of his working life. He was married for over 50 years; his wife died 17 days short of their 51st wedding anniversary, and although he lives alone, he has a constant stream of friends calling or stopping by his home that overlooks the vast Antelope Valley. He says back in the days of the Space Shuttle, he used to sit on his back patio and watch them land at nearby Edwards Air Force Base.

When asked about the secret to his long, active life, he says, “My wife said that grocery bills were cheaper than doctor bills, so we always had 3 good meals a day”. Of course I used to drink a lot of scotch and I smoked for 45 years, so I guess I’m just lucky.” It was noted that while the three of us sat for about a hour and half asking questions and listening to his stories, he was always moving, getting something for us to see – he never sat down! How remarkable to be active, relevant and so engaged in life at 88. Last summer he was flown back to Washington DC as part of the ‘Honor Flight’ that recognized and thanked the surviving heroes of WWII. Aside from being a hero, he’s just an all around good guy – a Great Ambassador for the ‘Greatest Generation’.  Thank you Earnie for your service to this country, for your example as a great American and for some damn good jam.

Would you help us share our stories with others?  Please pass our blog link (www.fromabirdseyeview.com) along to your family and friends and ask them to ‘subscribe’ so they can have a new blog going directly to their email every Monday.  Thank you and we hope you have a wonderful Thanksgiving.

8 comments on “The Incredible ‘Earnie’ Earnhardt”