Seventy years ago next week, on February 3, 1945, members of the First Cavalry burst through the gates of the prison camp of Santo Tomas in Manila, Philipines to rescue over 3700 Allied civilians held captive by the Japanese.  I am very familiar with this story, as my husband and his family were among those rescued.  My mother-in-law, Kathleen, kept a diary during their years of imprisonment that became the basis for my book, “In The Enemy’s Camp”.  Most of the internees were British and American businessmen and their families who were caught up in the war, unable to repatriate back to their home countries before Manila was bombed on December 8, 1941.  But this blog is not about them, it is about the brave soldiers who risked their lives, racing 100 miles to Manila to liberate the camp.  But first, a bit of background. 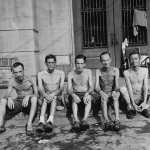 The First Cavalry had already taken part in the liberation of Cabanatuan, the prison camp containing the survivors of the Bataan Death March.  Once the military POW’s were safely in American protection, General Douglas MacArthur ordered his troops to do whatever was necessary to get to Manila quickly and save the civilian prisoners.  The Japanese had made their intentions clear in August 1944 that all prisoners, military and civilian, were to be eradicated before the territory was overtaken by the Allies.  On Peleliu Island, Allied POW’s had been herded into an underground bunker and burned to death.  So no time was to be wasted in getting to Santo Tomas.  The prisoners were already dying at alarming rates from malnutrition and tropical diseases.  Each internee was allocated just 900 calories a day of rotting and insect-infested food.  Their fortitude was at a breaking point.  When the First Cavalry broke through the gates of the camp on the night of February 3, many of them fainted purely from mental and physical exhaustion. 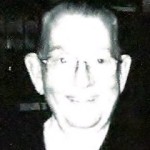 There are many great source materials from and about the internees’ experience.  Several people wrote books after the war and my in-laws owned most of them.  When I set about writing my book I was interested in learning about the rescue from the perspective of the men who did the rescuing.  So I placed an ad in “The Saber”, the newsletter of the First Cavalry Division, seeking anyone who had either participated in the rescue or knew something about it.  I was lucky enough to find five men who took part in the mission – Chelly Mendoza, Claude Walker, John Yunker, Walter Pike and Bob Holland.   In a twist of fate, Bob Holland was also in the process of writing a book about the rescue and lived just 10 miles from me.  We were able to meet often and had the privilege of introducing him to my mother-in-law in 2003, their first meeting since he had crashed through the gates 58 years prior! 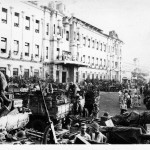 To a man they were typical of the WWII generation – none of them had spoken about the rescue since it occurred, not even to their families.  But in their letters to me it was evident that they were very proud of their mission and the happy end result.   Most said that the rescue was the first time the war had made sense for them since they had begun serving in the Pacific Theater.  They had rescued Allied prisoners who, without their efforts, would surely have succumbed to either disease, starvation or worse.  In the movie, “The Great Raid”, Lt. Col. Henry Mucci, told his men that the pride they would feel if it was successful would not be just for that day, but something they would carry inside them for the rest of their lives.  I don’t know whether he really said that or it was the result of a screenwriter’s imagination.  But I do know that the sentiment was certainly evident in the five men I interviewed.  Regardless of what happened the rest of their lives, they all said that rescuing the prisoners at Santo Tomas was one of the proudest moments of their lives.

So next Tuesday, please raise a glass to the wonderful men, most now departed, who were the saviors of so many people.  I can say from first-hand experience that they were heroes in every sense of the word.

7 comments on “THE RESCUE OF SANTO TOMAS”