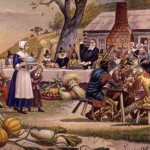 Women serving men even before football was on TV

I know.  Thanksgiving is over.  Our collective minds have turned to “The Holidays”, which means most of you are buying presents, trimming trees or dipping into the egg nog.  After looking at the crowds on Black Friday apparently a lot of people were “dipping”.  For many of you the only remnant of Thanksgiving you want to think about is that last slice of pumpkin pie you’re hoping no one remembers is still in the fridge so you can sneak-eat it at 3 a.m.  But I’ve been giving a lot of thought to Thanksgiving lately – specifically the Pilgrims – so I am dragging out the holiday for one more week.  The reason:  I am doing extensive research on our Pilgrim ancestors in my quest to join the Mayflower Society.  Why would I want to join the Mayflower Society?  Well, first, because I love history and the society’s chief aim is to preserve our early heritage.  But more importantly, recent world events have me thinking about what it means to be an American.  How did we start?  What were our founding beliefs and principles?  And just who were these people who left hearth and home to board a rickety ship and sail off to an unknown land?  My previous research has unearthed that we are related to five of the families that took that courageous step and were passengers on the Mayflower.  The 102 passengers on the ship were almost evenly divided between the “saints” and the “strangers”.  The saints were religious dissenters who left England for Holland and eventually America.  The strangers were merchants, tradesmen or indentured servants.  There were also a few “dodgy” sorts who were fleeing the law.  Amazingly, our ancestors were all saints.  I have to say I was a little disappointed to learn that – I was hoping to have a good scoundrel in our background to make things a bit more interesting. 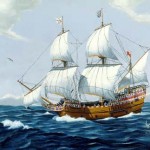 The Mayflower Society wants me to prove our lineage, which I suppose is a reasonable request.  There are over 30,000,000 possible descendants world-wide but only 27,000 have joined the group.  I suspect that’s because they require actual documentation, not just some letter from old Aunt Sally that’s been handed down through the years.  One has to submit marriage licenses, birth certificates and/or death notices.  Heretofore (meaning before the internet) obtaining all of those documents was an almost impossible task.  Trust me, it’s still a pain to document and verify everything but as the “family historian” I figure it’s my job.  Plus, it turns out that if a relative has joined the Society then any direct relatives can join without having to prove much more than you’ve fought over a drumstick at Thanksgiving or you’ve both tolerated Drunk Uncle at Christmas.  So I’m hopeful that if I go through the process of “showing them our stinkin’ badges” that some future member of our family will be more willing to take up the mantle of family historian.  Luckily in 2011 I joined Ancestry.com and used their documentation to write our family history dating back to the Pilgrims.  That’s the good news.  The bad news is that I have kept my membership in Ancestry since then in anticipation of writing our family’s European history.  But one thing or another has kept me from doing the research – mostly due to my borderline A.D.D and my inability to stare at a computer screen for hours.  As a result, I have paid those nice people at Ancestry $960 in the past several years for … nothing.    Which I think is their business model – rope in people with good intentions and lazy attitudes and the bottom line looks pretty good. 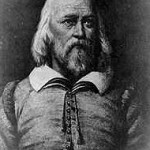 But back to the task at hand (you can see how I get distracted)… in doing the research in 2011 I found that my maternal great-grandmother’s family has formed an elaborate organization.  Genealogy, it seems, has become the second most popular hobby in the world, right after gardening.  That’s right – the study of dead people is more popular than golf or stamp collecting.  As it turns out, many families have their own organizations and websites and it was through my great-grandmother’s family website that I first learned of our Pilgrim connections.  I’m hoping that a lot of the genealogy geeks in that organization have already joined the Mayflower Society so that all I’ll have to prove is my direct lineage from her.  Heck, I’ve got pictures of her with my mother so that should count for something.  Hopefully there isn’t any sort of “blackballing” or personality test required.  Our mom said that her grandmother, although civic-minded and philanthropic, was something of a pistol.  And not in a good way – she was domineering, opinionated and humorless.  It may run in the family.  One of our Pilgrim ancestors was William Brewster, who was the spiritual leader on the Mayflower, and was said to have many of those same traits.  On the other hand, Sarah Palin is also descended from Brewster, so maybe he did have a sense of humor after all.

In any event, I have submitted my application to the Mayflower Society and they tell me it will take 3-6 weeks to see if I’m “qualified” to join.  There’s a small part of me that hopes they send a response informing me that our ancestors were actually horse thieves and had no part in the Mayflower.  Then I can take up gardening and finally cancel that subscription to Ancestry.com.

4 comments on “THIS PILGRIM’S PROGRESS”