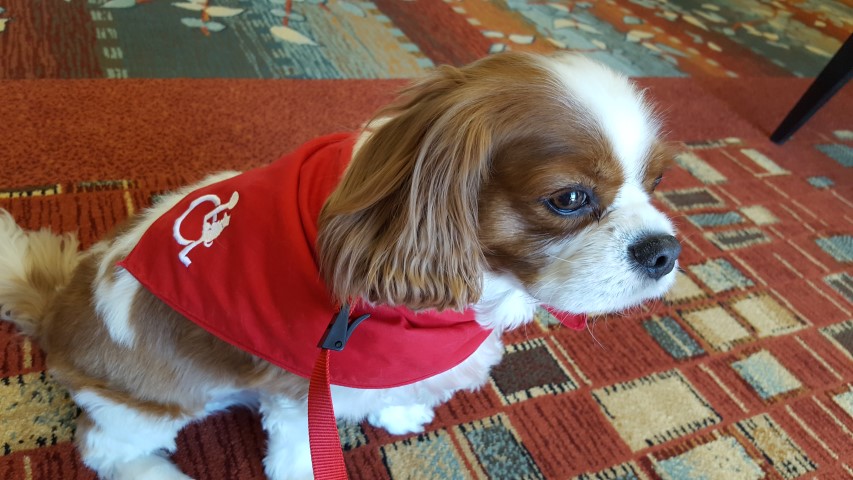 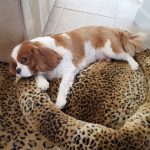 Dash at his usual station

Dash the Wonder Dog is three years old which, for a Cavalier King Charles Spaniel, equates to 28 human years.  In other words – he is a millennial.  But it’s not only his age that puts him in that category.  He also fits into that demographic through his actions, or better put, his inactions.  To wit:  he still lives at home with his parents, he lies around all day on the couch watching television, he expects to be served his meals (on time) and he does not contribute one cent to the household coffers.  To add insult to injury, he has never barked so he’s not even a respectable watch dog.  In fact, the welcome mat our on our front doorstep says “Warning – Dog Can’t Hold His Licker”.  Something had to be done.  I began to research how he might contribute – nothing too taxing, after all he is the Royal Dog of England.  As luck would have it, I stumbled upon “Pets on Wheels” in Scottsdale and decided we should give it a go.

Pets on Wheels was founded in 1990 as a visiting therapy dog organization with the mission of enhancing the lives of the elderly and/or infirm in special care centers.  Volunteers visit once a week, providing a bright spot in the day for all of the patients they visit.  For obvious reasons one has to jump through some hoops before being approved by Pets on Wheels, so on a bright Saturday morning in March Dash and I attended the orientation meeting.  Two delightful women talked about the history of the group and showed heart-warming pictures of dogs (I think some people were in them too) and explained what was required of a dog to be approved for the program.  They assured us that the qualifications weren’t too hard – respond well to petting and touching, ignore loud noises, reject any food that may be on the floor, and walk well on a leash.  I began to panic.  Maybe these two ladies felt that was a rather low bar, but I know that Dash has never rejected a morsel of food in his life.  He sits at my feet every night as I prepare dinner, not looking up at me but instead staring straight ahead so that he can best sight any falling crumb.  Nothing escapes his steely eyed gaze.  As for walking on a leash – I have rotator cuff damage from all the pulling and tugging on our daily walks.

But on the plus side, Dash does have his Canine Good Citizen certificate so somewhere, deep in the recesses of his brain, he does know how to use his party manners.  I prayed that those recesses would come to the fore.  So we started the test, him happily unaware and me nervous as a tick.  Of course he loved being petted and didn’t flinch a bit at loud noises.  Next we had to walk down a long hallway so they could see if I had him under control.  Under control????  Are you kidding?  He has had me under his paw since the day we brought him home.  He treats my commands as mere suggestions, and usually obeys only if there is a snack involved.  But, here we were, being tested and as if the heavens had opened up and angels were sitting on his shoulder, he walked down that hallway like he owned the place.  Whew!  We made it through the first round. 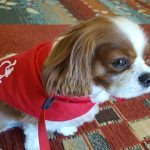 Dash in his uniform

The second phase of approval took place at our assigned care facility, Vi at Silverstone.  An experienced observer met us there so he could evaluate how Dash interacted with the inhabitants.  Let’s be honest, I think I was also being evaluated but the observer was too kind to tell me that.  As we walked into the building Dash immediately lurched to the right.  Unfortunately, the nice people at Vi put out a plate of cookies every day for visitors.  So Dash, assuming he was an invited guest, thought the warm, fragrant oatmeal cookies were up for grabs.  So much for first impressions.  The evaluator gave me a look I couldn’t quite place – it was either “Lady, you are dreaming if you think you’re going pass this test” or “Hey, my dog does that too”.  Regardless, on we went, visiting the people in the assisted living unit and then the skilled nursing area.  Finally, we entered the memory care quarters which requires a five digit code to enter and exit.  I am expected to remember it which, considering I am constantly forgetting our four digit security system code, could result in me permanently being locked in.  Well at least that would save my family the trouble of having to officially commit me.  Luckily my Swiss Cheese brain remembered the code so we returned to the lobby where the evaluator told us we passed.  Dash got his official “uniform” – a Pets on Wheels bandana, a leash and a badge.  I got one of those oatmeal cookies.

In the weeks since being approved we’ve made several visits and Dash has been a champ.  I’m not really surprised.  As much as he can disobey me at times, he is the very picture of obedience when he is around strangers.  He is always patient and quiet, accepting of whomever comes his way.  He contentedly sits on laps, savouring every scratch behind the ear or rub on the belly.  But of course, the best part of his new job is seeing the faces of people that he visits. Most of them light up when he jaunts into the room and many want him to sit on their bed so they can get a snuggle.  Even in the memory unit he is petted and loved and for that instant has made someone happy.  As for me, I love doing it too.  I think about the day, hopefully very far in the future, when I might find myself in similar circumstances.  How joyful it will be to once again feel a furry paw on my hand or a moist lick on my cheek.  For now, I’m just happy to accompany Dash to work.