“Nothing in life is more exhilarating than being shot at with no results.” Winston Churchill 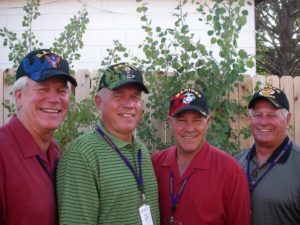 I had the privilege of spending a couple of days with three gentlemen, Ken, Joel and Terry with whom I attended Westminster College, where we played football together under the tutelage of future San Francisco 49er Super Bowl coach, George Seifert. We were Seifert’s ‘first team’ as a head coach, although he probably refers to us his ‘worst team’. The four of us have reunited on a few occasions since graduation, even one that Seifert attended, but it had been several years since we last saw each other, so it was time.

When you get four 70-something former football players together in Las Vegas, you’d expect a lot of stories under the heading of ‘The Older We Get, The Better We Were’. Not so with this group. While football was certainly mentioned, like during our first beer when we toasted to those players who are no longer with us, it was hardly the main topic of conversation. What was? To that in a moment.

Suzanne has done a great job each Memorial Day of writing about and honoring those from our hometown of Novato, who made the ultimate sacrifice in the Viet Nam war; this story is about three guys that made it home, and I’m so glad they did. 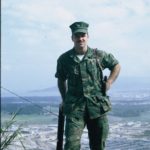 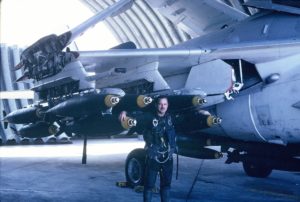 Ken and his ‘loaded’ A-6 aircraft

Ken Poulsen – Marine Lieutenant who was a Bombardier-Navigator in the A-6 Intruder jet. He spent 12 months in Viet Nam stationed in Da Nang where he flew ‘close air support’ during the day for troops on the ground and did ‘road wrecking’ of the Ho Chi Minh trail at night, where he was constantly under attack from anti-aircraft fire. Once out of the service, Ken went into education and ultimately became the Superintendent of Schools for a district in the Sacramento area. Ken retired several years ago and now lives with wife, Suzi in Chandler, AZ and when it gets too hot there, they head up to their second home in the mountains of Show Low, AZ. Ken was our cruise director for these couple of days together and put together a line up of shows, golf and meals that hardly gave us time to lose money in the casinos. 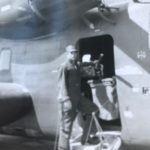 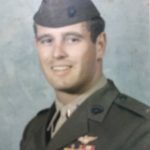 Joel Hall – Marine Lieutenant who earned both his Navy and Army wings and flew the CH-53 Sea Stallion and the UH-1 ‘Huey’ helicopters at Marble Mountain, just outside of Da Nang, during his 13 months ‘in country’. He flew various ‘support’ and ‘medevac’ missions and when I asked him if he often came under enemy fire, he said, “Oh yeah, and I had the holes in my aircraft to prove it.” After getting out, Joel went to work for the 3M company and retired from there after a 32-year career. He now lives in Atlanta on a golf course and when it gets too cold to play golf there, he and wife, Gayle have a second home on the east coast of Florida where they spend five months a year. Joel can hit a golf ball further and straighter now than he ever could, and his cigar never gets in the way. 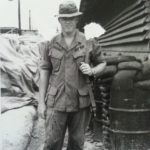 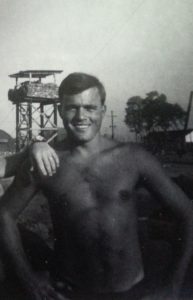 Terry Callahan – Army, Spec 4, Medic. Terry was with both the 25th Infantry Division and the 1st Air Cavalry Division, two of the most decorated units of the Viet Nam war. Terry was in several locations throughout his 12 month tour, mostly in Viet Nam jungles near the Cambodian border. He’d do triage for soldiers brought into the first aid field tent as well as fly into ‘hot zones’ in a helicopters to pull out wounded personnel. It was ‘meatball surgery’, stop the bleeding and pain, sew up gashes where you could and get them to a hospital facility. He clearly saw the ugly underbelly of this war up close. After he got out, he did a little teaching and then spent most of his career working for the Justice Department; working cases for judges to determine sentences as well a working with parole officers. Terry and wife, Teri, who is a Delta flight attendant, were married about a year ago and live in Salt Lake City, and when it gets too cold there they have a second home in St. George, Utah. Terry is a humorous storyteller and a good one, whether he’s telling you about the time the hair under his arm caught fire or telling you how flat his home state of Kansas is when he says, “You can stand on a tuna can and watch your dog run away for two miles.”

Fortunately, all three of these veterans were shot at without results. 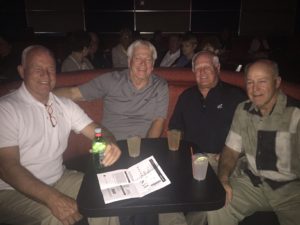 So the topic of conversation was about each of their personal experiences in Viet Nam; we touched on the Ken Burns documentary, The Viet Nam War, now playing on PBS, and the protests of NFL players in the form of sitting or kneeling during our National Anthem. We all felt that these NFL players can couch it any way they want, but make no mistake, by kneeling or sitting during our National Anthem they are disrespecting their flag, their country and the brave men and women who fought and the many who died, for them to have their freedom of expression. While those that lost their lives fighting for this country cannot be outraged at these demonstrations, these three veterans, who put themselves in harms way, can be and are.

I came away from my time with my former teammates humbled and thankful to be able to call these three men good friends and so very thankful that they made it home safely.

12 comments on “Three Stand Up Guys”