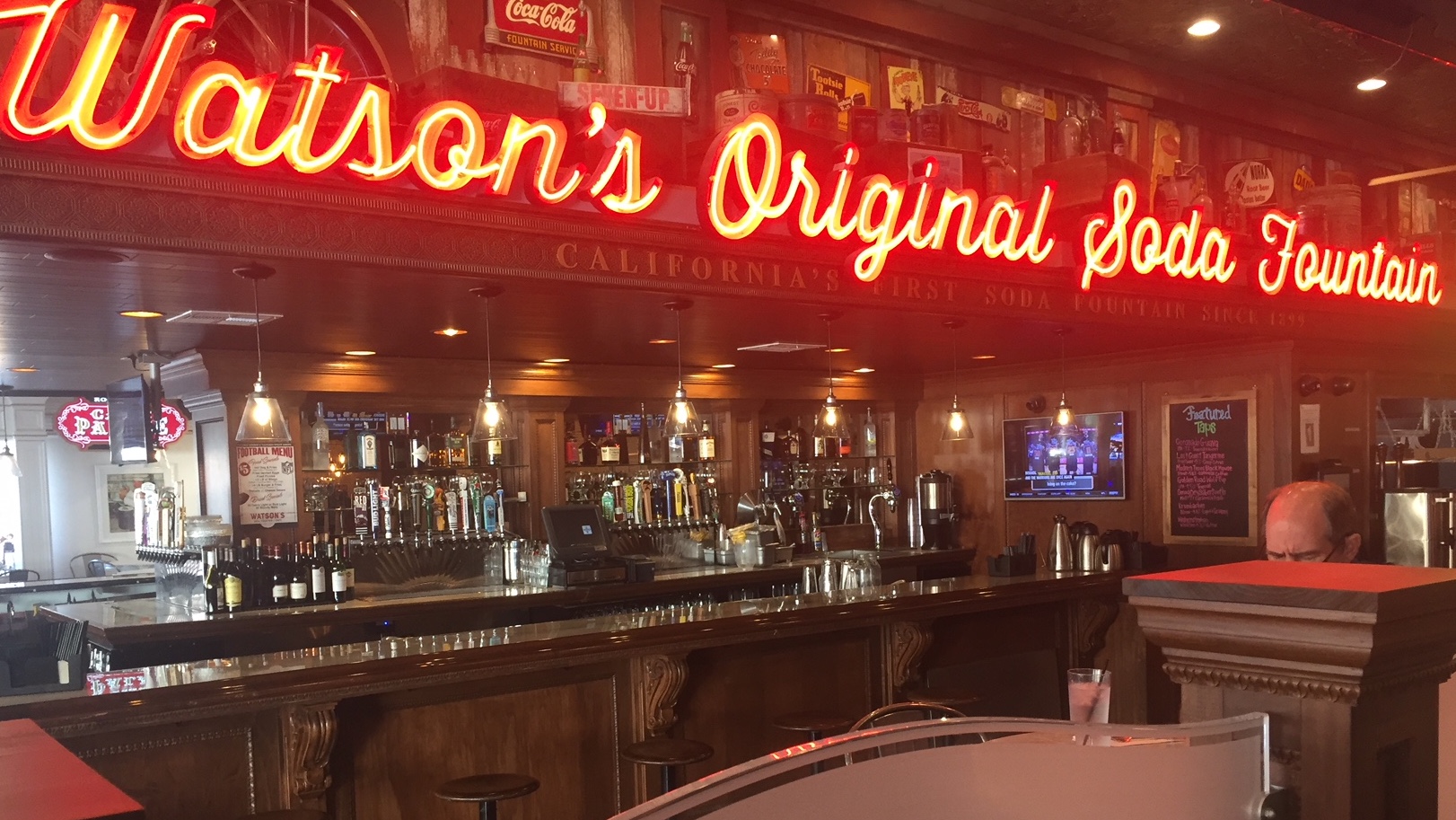 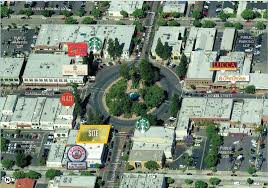 I didn’t have to go too far to go back to the 1950s. This week’s journey was a short jaunt down the road to Old Town Orange and the iconic Orange Circle. I’m not suppose to call it that, it’s the Orange Plaza, but it’s a circle, or more accurately, a ‘round about’ in the middle of town and it’s been a circle since the 1870s. It is surrounded by one square mile of historic buildings offering 50 different architectural styles from Spanish Colonial to Victorian. This area is the ‘antique capital’ of Orange County, with some 79 antique stores; there actually used to be more, but some have given way to eateries that now make ‘The Circle’ a destination for diners. 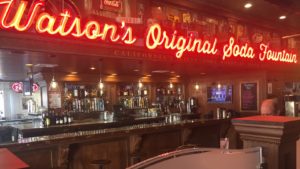 So last Thursday morning I headed to Old Town Orange, not to look at antiques, hell if I wanted to see an antique, I could just look in the mirror, but to have breakfast at Moody’s. Of course no one calls it Moody’s any more; it’s now Watson’s Original Soda Fountain & Café. It’s actually been Watson’s since 1889 and it is the oldest continuous running business in Orange County and the oldest soda fountain in California.  But for a while in the 70s a guy named Moody ran the soda fountain side of the pharmacy and when I lived about 5 blocks from there, that’s where I took daughter, Stephanie for a treat, starting when she was about four. Her favorite treat was the chocolate ‘milkshape’, as she called it. It came in a tall soda fountain glass with a straw and a long-handled spoon, accompanied by the extra milkshape in the frosty mixing tin. It was delicious! Going to Moody’s for a milkshape became a regular thing. To continue the tradition, I’ve recently taken Stephanie and her kids, grandchildren Dylan and Emma, to Watson’s for whatever they wanted, as long as it was a chocolate ‘milkshape’! 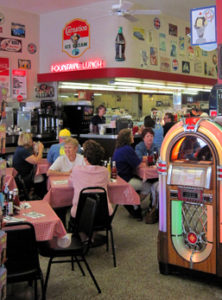 But on this crisp fall morning I wanted to check out the ‘breakfast scene’ at this historic diner; have some eggs and a cup of hot coffee and see if there were some old codgers gathered around a cracker barrel to shoot the breeze. There weren’t.  It was quiet except for the juke box playing some great old 50s tunes.

I took a seat and looked around recalling some of the history of the place. It’s been the location of several movies and tv shows.  Most notably in 1996 the movie, That Thing You Do, which told the story of a ‘one-hit-wonder’ band in 1964 and was written, directed and starred Tom Hanks, used Watson’s in several scenes. Previous owner, Scott Parker, a Watson pharmacist whose ownership dates back to 1971, sold the store in 2015, and today at 75, Parker still works one day a week at a pharmacy in Leisure World in south Orange County. After the sale, Watson’s was closed for some time for renovations while many Watson customers, present company included, were nervous about what the new owner would do to this venerable location. One could hear huge sighs of relief echo through the city when the new owners committed to “bringing the soda fountain back to its original glory.” 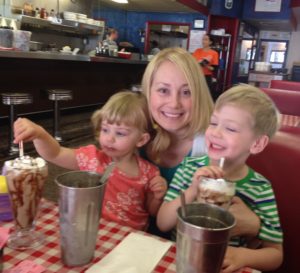 They did a great job of keeping some of the old décor and adding some new artifacts, including an old telephone operator’s switch board, a huge old time safe and a door off the diner that reads, Proprietor, Kellar E. Watson.  Kellar purchased the Orange Drug Store in 1899 and renamed it Watson’s, but he didn’t open the soda fountain until 1915.  It wasn’t always a 50s theme because . . . the 50s didn’t happen until . . . the 50s!  Now the multiple TVs that hang from the ceiling are flat screens, but during certain hours they show 50s reruns like I Love Lucy, Mr. Ed and The Andy Griffith Show.  The fare includes the usual breakfast items as well as hamburgers, fries, sandwiches, cherry cokes, banana splits and, of course, ‘milkshapes’. The only major change from earlier menus is that now one can get an adult beverage there, which I don’t think interferes with the theme; I mean liquor was around in the 50s!

So how was my breakfast?  I couldn’t resist, at 7:30 in the morning I ordered a chocolate ‘milkshape’.  The server looked a little surprised, but said she would have to plug in the machine.  Several minutes later out came the tall soda fountain glass filled to the brim with whip cream on top and the extra milkshape in the frosty mixing tin.  It was delicious!