I would like to think that the moniker, ‘Bob the Fish Killer’ comes from the many trophy fish and photos that adorn my den wall, but unfortunately I think it’s a reference to my inability to keep even a simple gold fish alive for longer than a week.  The truth is I don’t have any fish on my den wall; I don’t even have a den.  The reason I don’t have any fish or photos on any wall is that I’ve never hauled a big fish into a boat, never had one on the end of my line much less in a picture or on my wall.  In fact, the closest I’ve ever come to a big game fish is when I ordered Ahi Poke at Red Lobster.

It’s not just big game fishing where I’m ‘the cooler’; I’ve not caught salmon in the Northwest when they were jumping into boats; I’ve never seen a lake or a stream from which I could extract a trout, a cat-fish or even a decent boot.  While fishing I’ve caught a cold, I’ve caught hell, I’ve even snagged a fishing buddy’s shirt while casting (really!), but I’ve never caught a big fish.  Even if Grunion are running, I’ve pulled a hamstring and can’t catch them.  If fish are hitting on worms, I’m using Day-Glo cheese that scares the hell out of them.  You get the picture; fish are never so secure as when I embark on a fishing trip.  But all that was about to change.

Two week ago I was asked to accompany a friend, Randy to ‘The Cape of St. Luke’, more commonly known by its Spanish name, Cabo San Lucas (a noted fishing mecca for centuries), to meet up with another buddy, Gary, who keeps a boat in the Cabo harbor all summer.  This was no ordinary buddy and no ordinary boat.  Gary has been big game fishing his entire life, as a youth in Florida and as an adult in California and Mexico.  He knows fish.  The boat, Grand Legacy, is a beautiful 70 footer with the most sophisticated ‘fish finding’ equipment known to man.  There were no less than 16 ‘big rods’ on board with assorted lures and 25 ‘other rods’ and one of those chairs at the back of the boat that looks like a dentist’s chair that one sits in when landing ‘the big ones’.  I told Gary about my lack of angling prowess and he told me not to worry that he’d never been out for two days at this time of year and been ‘skunked’.  To further explain ‘this time of year’ below is a chart I came across that shows ‘Fish Species Availability’ in Mexico, month-by-month.  The chart rates availability with a ‘check system’, 3 checks for excellent conditions, 2 checks for good conditions and 1 check for not-so-good conditions.  Here’s what the chart read for the month of June for Cabo:

I was understandably excited; we had an experienced and knowledgeably captain, a well-equipped boat and it was a month when the big fish were hungry.  I was cautiously optimistic that my frustration from all those previous fishing misadventures was going to be wiped away.  I envisioned myself sitting in that dentist’s chair watching one of those fish with a pointy nose leaping out of the water at the end of my line and me, exhausted after hours of reeling, finally hauling on board the subject of what would become my very first big fish photo-op.

We headed out on day one and I realized that deep-sea fishing is mostly a rather passive experience.  Once we were out far enough, deck hand, Paco set about five poles in their holders at the back of the boat, lets out some line with lures on them and . . . well, that’s it.  After I watched him do this, I went into the galley, grabbed a beer, climbed up to the bridge where Gary was driving the boat and I asked him, “Are we fishing now?”  He turned around, looked at the back of the boat, saw that the lines were in the water, turned to me and said, “Yep”.  I sat next to him for a while, occasionally turning to see if anything was jumping up and down behind the boat, I finished my beer and went below and watched an episode of Three and a Half Men, with Gary’s son, Parker; then stared into the sea from the back of the boat for a while.  It turns out that deep-sea fishing is even less strenuous that regular fishing, which itself ranks fairly low on the cardio-vascular exercise depth chart.  No putting hooks on a line, no constantly affixing bait to the hook, no casting, no reeling, no checking the drag, no wading in the water, no tying flies to lines, just watching.  The only time you have to work is when you catch a big fish, and you should be fairly rested up to handle that.  I kept watching.

So below is my ‘Big Fish Photo Op’  The first is me displaying the only fish I caught – it was with a net out of the bait tank; the second is the real ‘fish’ hanging up at the Giggling Marlin, a local adult beverage establishment.  The Marlin were indeed giggling. 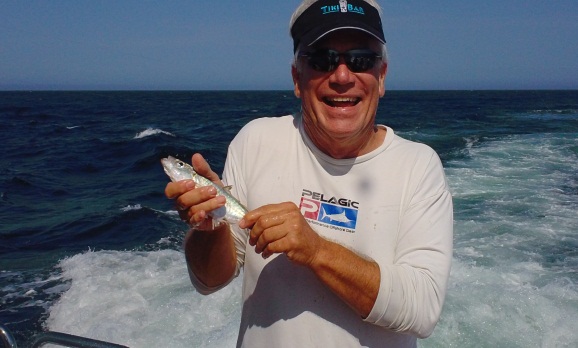 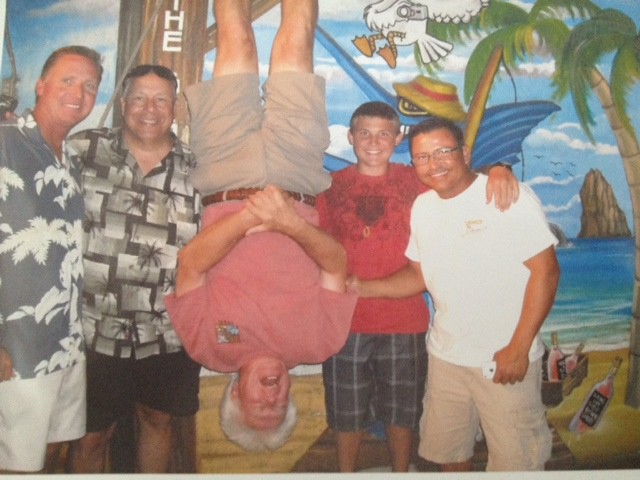 Gary, sorry I ruined your ‘no skunk’ record, but thank you for a wonderful time.  ‘The Cooler’ lives to fish another day.

6 comments on “A Cabo Fish Story”