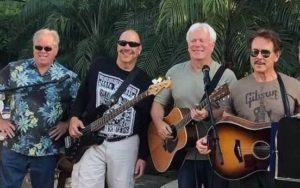 It was about a year ago when three of us guys (Ron Vallandingham, Michael Amoroso and me) decided we’d get together and ‘jam’ – we all played guitar, sort of. Prior to last Saturday’s ‘recital’ we had added a base player (Randy Davis), a drummer (Larry Eiffert), lost one guitar player (Amoroso) and got a better understanding of why bands break up. I call it a recital, rather than a concert because it was more like a child’s first public piano or dance exhibition . . . mostly something only a parent would appreciate. Concerts are done by professionals, and we are technically the opposite of ‘professional’ as we not only didn’t get paid, we bought our audience’s dinner and drinks as a incentive to come and listen to us. But, we’ve maintained our amateur standing, so we have that going for us.   The ‘recital’ was in Randy’s backyard and attended by 70 some-odd people – yes, some were very odd, but all seemed very appreciative.

What kind of band are we? We’re still trying to figure that out ourselves: Part rock –

prehistoric rock; part pop – Ma & Pop Kettle; part folk – old folk; mostly a random cacophony of noise with flashes of melodic chords with windows of harmony. While it was no Woodstock, it seemed like everyone was enjoying themselves and feeling the love, but again these were our family and friends and weren’t disposed to criticizing our playing and singing, especially while drinking our wine.

Throughout the evening we pretended to be a real band, telling our audience that this was the last stop on a 13-city tour from Fontana to Stanton (It was the one and only stop); telling them they could buy a ‘Monday Knights’ tee shirt in the gift shop – there was no gift shop, however we were willing to sell the shirts we were wearing, but no offers. And just like a real band, we learned to play over the hum of a chatty audience.

The evening ended with an open mic with drummer, Larry playing disc jockey to karaoke – some really good voices, including son, Jeff, who also designed the band’s logo and shirts.  – you can order one online (No you can’t). Where did you get your name and what’s next for the Monday Knights?  The name came from several places, 1) we all belong to Yorba Linda Country Club’s Monday Night Fantasy Football League, 2) after football season was over we started practicing together on Monday nights, and 3) If we ever get a real gig, it will probably be on a Monday night . . . late. Whenever that next gig is, we’ll have to wait until our bank accounts get replenished, so we can again afford to buy dinner and drinks.  We’ll keep you posted.

6 comments on “An Evening of Fun with the Monday Knights”