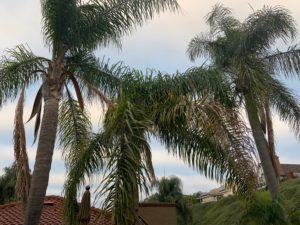 This blog is termed something that Suzanne and I have come to refer to as ‘ a filler’.  I haven’t gone anywhere in the last two weeks, except to the bathroom. Nothing interesting has happened to me, in fact nothing interesting has happened to anyone I’ve talked to in the last two weeks.  So if you’ve got something else to do or somewhere else to go, I’d suggest not reading the rest of this drivel and get on with the rest of your day.

The palm trees in the photos?  That probably tells you more about my last two weeks than you’d care to know.  In preparation for our son, Jeff, getting married and the rehearsal dinner at our house, I had all of my palm trees trimmed, more accurately, scalped.  There are 24 palms in my yard, 12 queen palms and 12 pigmy palms.  Some of my pigmy palms are 10 feet high, not sure why they’re called pigmies.  A crew of 5 came in over the weekend and blitzkrieged my yard – saws buzzing, limbs flying (tree limbs, no human limbs that I saw) and people hauling stuff out to the ‘chipper’ in the street. 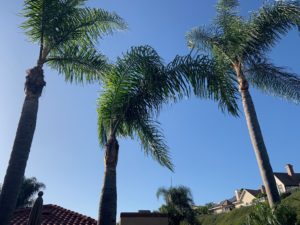 After: skinny palms, even the sky looks bluer

You’re probably on pins and needles wondering what the trees looked like after the blitzkrieg.  Well, here’s a photo of those same three trees.  Looks like the ‘before’ and ‘after’ photos for a weight-loss program, huh?  Actually it was similar to a money-loss program.

They also trimmed up two banana palms I have in my back garden, but I didn’t take a ‘before’ photo, so the ‘after’ photo wouldn’t really tell you the whole, thrill-packed story – you’ll just have to use your imagination . . . or not.  Are you still reading this crap?   I can guarantee you that it’s not going to get any better.

I’m a big college football fan and I could pontificate on the California law being run through the system currently allowing college athletes to profit from the use of their name or likeness.  Apparently a $100,000+ college education isn’t enough profit for a 19-20 year old.  On the surface it looks like it will only benefit the stars of the team, who would probably get a pro contract in another year or two anyway.  I’m sure there’s another side to the story, I just don’t want to hear it.

I understand we have an election year coming up; I’m sure the contests will be fair, civil and boring given the current atmosphere of political malaise in our country.  My sister and I will continue to stay above the fray and remain apolitical as we are both Presbyterians.

I’m guessing you hope I go somewhere, soon!  Me too, but with the approaching nuptials and the holidaze just around the corner (only about 11 more weeks to get that Christmas shopping done – nothing big for me this year, please!) I‘m afraid I’m house-bound for the remainder of the year, which could mean more ‘fillers’.

Hey, Suzanne, maybe we should just take the last quarter of the year off.  What are our readers going to do, ask for their money back?

3 comments on “A Filler-buster: The Skinny Palms”