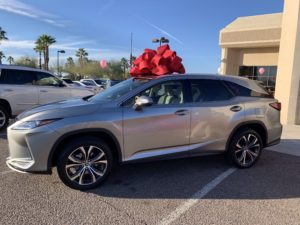 A few weeks ago I read an article on the CNBC website about Kakeibo.  In case you think that’s a form of sushi, I’ll explain.  Kakeibo roughly translates to “household financial ledger.” Invented in 1904 by a woman named Hani Motoko (notable for being Japan’s first female journalist), kakeibo is a simple, no-frills approach to managing your finances.  In essence, every purchase is made with thoughtfulness.  If you practice it you will ask yourself several questions before buying anything – can I live without it?, can I afford it?, will I really use it?, etc.  That seems like a lot of thought process to go through when buying toilet paper but it’s probably not a bad concept on anything more important…like that new pair of Manolo Blahniks.  I’ve been practicing Ms. Motoko’s approach most of my life.  As a struggling college student and then when I had my first job and apartment, eating a solid diet of bologna sandwiches prepares one for frugality.  Which, in part, is why I seldom buy a new car.

My current car, and Acura MDX, has been showing it’s age.  Not the body or interior – that still looked pretty good.  But the car was 9 years old which, from an electronics standpoint made it something out of the Pleistocene era.  Every six months I would get an offer from Acura asking me if I wanted to update the nav system and I always declined.  After all, I always carry my cell phone so I didn’t see the need.  But my husband convinced me that I really needed a new car if we are going to go on any long trips this summer.  God forbid, we would dirty up his BMW taking it anywhere.  I decided to go back to the Lexus RX SUV, a car I’ve owned twice before.  And here was a contributing factor:  Lexus always has a great lounge with baked goods and coffee.

Our first venture into a dealer was our local one and the car salesman had all the traits of a Randy Quaid character – just the slightest bit sleazy.  His attitude was “we sell a million of these so we don’t care if you buy one.”  So we didn’t.  Then we were lucky enough to have our friend Alfy take my husband to Superstition Springs Lexus to meet with Mark Dent.  I instructed them to find me a silver car (because that’s really the most important thing about a car, right?) and sure enough they came home with a deal.  I would have loved it if they’d just driven it home but nothing is ever that simple.  Turns out I needed to be there to sign all the paperwork so, braced for the worst, over the weekend we made the 45 minute trip to pick up my new car. 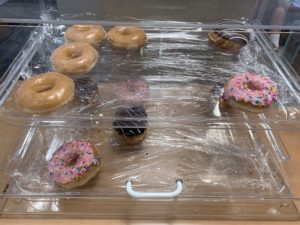 Right off I knew I’d like this place because they had a comfy lounge and…wait for it…doughnuts!  Ahhhhhh, that’s when I knew I was back at a Lexus dealer.  Secondly, and probably more important, turns out that Mark Dent is one of the most likable car salesmen I’ve ever met.  He’s actually just a really nice guy, regardless of profession.  He even put the big red bow on my car, which was a fun touch.

A “swift” two and a half hours later we drove off the lot with our new purchase.  We ran into trouble immediately upon entering the freeway because my husband said the steering wheel was shaking.  He was certain that the tires were out of balance.  Turns out, it’s the lane guidance system that alerts you when you’re veering out of your lane.  OMG – I cannot thank Lexus enough for this.  I now can focus on reading or knitting on long car trips, rather than watching for any “drifting” on the part of my driver. 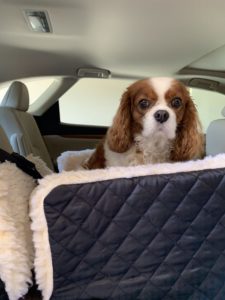 When we got home I made sure that the “captains” chairs configuration in the second row would be suitable for our captain – Dash the Wonder Dog.  After all, any road trip must include comfortable seating for his majesty. As you can see from the photo, he snuggled right in to his new ride.  Last I saw him he was trying to learn the voice control system so he could request pee breaks and dog treats from the back seat.

All in all, it was a great experience and I love the car.  But truth be told, they had me at the doughnuts.

6 comments on “ME IN A CAR GETTING DOUGHNUTS”