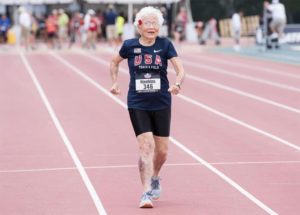 This Friday marks our mother’s 100th birthday.  She’s no longer with us – she died 6 years ago two weeks before her 94th birthday.  She was actually fairly healthy but fell in her apartment and broke five ribs.  Who knows whether she might have made it to 100?  Despite the fact she’s no longer here we’ll celebrate anyway.  We Sparrows never have to look far for a reason to hoist a toddy.  Mom’s century mark birthday got me to thinking about the people who actually reach that milestone.  What is their secret?  Turns out, there have been countless studies on the subject, many of which result in conflicting conclusions.  My After reading untold articles on the subject my opinion is that longevity is pretty much a giant roulette wheel.  Some argue that exercise and good, clean living are the secret, while there are ample stories about centenarians who swear by cigarettes and a shot of whiskey each day.  That said, ignoring the “eat spinach and turmeric” advice, there do seem to be some personal qualities that lead to a longer life.

Be Rich – Yep, you read that right.  One of the leading reasons for longevity is the access to health care.  People of means tend to go to the doctor when symptoms arise, thus resulting in earlier diagnosis of serious disease.  So if you want to know how to add some years go add some money to your bank account. 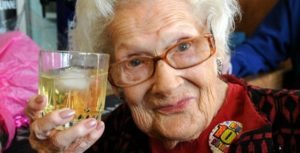 Here’s to your health!

Laugh – Turns out that laughing more – especially at oneself – can lead to increased longevity.  Almost every article I read about living to 100 had some variation of good humor: have a positive attitude, be friendly, socialize.  There are scientific reasons for this that are above my pay grade but basically laughing and being of good cheer releases hormones that reduce stress, which in turn, leads to a longer life. Maybe that’s why so many 100 year-old’s swear by their glass of whiskey!

Get a Pet –  Well, duh.  Any of us who have pets know that they are wonderful companions.  But it turns out that owning a pet can reduce your chance of a heart attack by one-third!  They are the ultimate stress-reducers and provide a sense of purpose by requiring food, walks and scooping up poop.

Cope with trauma – One of the most interesting studies found that male Holocaust survivors lived longer than men of the same age group who immigrated to Israel before Nazi rule. The theory is that living through trauma resulted in post-traumatic growth and a greater appreciation for life. This one hit home for me. My husband and his parents were interned in a Japanese prisoner of war camp for four years. His father had every tropical disease known to man during that time. That, coupled with the stress of caring for two small children in a dangerous environment, took a toll. Yet, my father-in-law lived to 90 and my mother-in-law lived to 96. You could not spend more that 20 minutes with them without a discussion of how lucky they were to survive – and thrive. Obviously, these are extreme examples, but there is something fortifying about coming through a bad experience that increases one’s appreciation for each day. 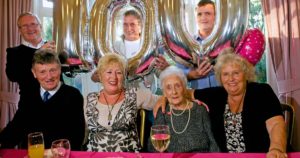 Family – In a world-wide study of people who lived to be 100 there were three regions that produced the most of these rare individuals: Sardinia, Italy, Okinawa, Japan, and Loma Linda, California (Note to Bob – move 47 miles east and you have it made).  The studies showed many differences but also some things in common – not smoking, moderate exercise, and eating legumes.  Jeez – those legumes show up everywhere.  But the #1 thing they shared was a love of family. Oh sure, I’m sure somewhere in there was a drunk uncle but for the most part they felt loved, supported and cared for.  Quite a nice feeling even for those who don’t reach 100.

There you have it – 50 studies distilled down to five common themes.  Personally, even after all that reading I’m still skeptical.  Even though I read that only 10% of longevity is based on genetic history, almost all of the women in my family going back for generations lived very long lives.  And as far as I can tell, they all liked a bit of the hooch and, if mom was any indication, the only gym they knew was Jim Beam.  So on Friday I’ll lift a glass to mom and pray like heck I should live so long.