By Dash “The Wonder Dog” Watson 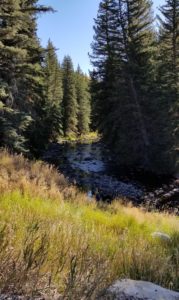 It’s been a long, hot summer here in Scottsdale.  My “people” have had one vacation shortened and one cancelled due to smoke.  They seem okay with it but do they think about me, having to wear a fur coat all summer.  No.  They are so selfish.  Really, they should be reported to the SPCA.  Last week, however, they made some attempt to humor me by throwing me in the car for 14 hours and driving to Vail, Colorado.  As most of you know, Vail is a beautiful ski town nestled in the Rocky Mountains.  What you may not know is that it was founded by Pete Vail and fellow members of the 10th Mountain Division after WWII.  Since then it has become not only one of the top ski slopes in the world but one of the wealthiest small towns in America.  Finally, my people were taking me someplace where I could be appreciated. 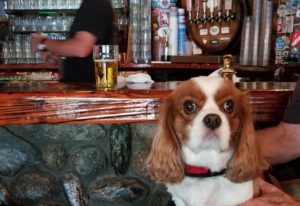 In fact, when we arrived I discovered that I was more than appreciated – I was accepted.  Over the past several years my human has tantalized me with photos of  Facebook friends in England who take their Cavaliers to the local pub.  I’ve always thought the English were right-minded when it comes to dogs but the proof is in the pudding…or pub…as they say.  Clearly the British understand our royal heritage and refined breeding.  In their wisdom, they have concluded that a well-behaved dog is preferable to Alfie the Drunk who can’t hold his pints. There – in the middle of Lionshead Village – was Bart and Yeti’s, a bar that not only allows dogs but is NAMED after dogs!  There is even a Golden Retriever who serves as the hostess.  Bart and Yeti’s is not all plaid carpeting and walnut paneling like the pubs my English friends frequent.  In fact, my humans said that it is what is commonly known as a “dive bar”.  I don’t know what that is and I didn’t see anyone diving so I think, once again, my humans don’t know what they’re talking about.  All I know is that the nice bartender allowed me to belly up to the bar, order a beer, and enjoy some social sniffing after a long day on the road.

A bite at Garfinkel’s

After drinks we found a place to eat – Garfinkel’s – that also recognizes the superior nature of dogs.  It is located right at the edge of the village with views of the ski slopes.  Since there was no snow I watched people hike up the hill.  Some of them looked like they were in dire need of an iron lung.  Vail, after all, is at 8,000 feet altitude which provides spectacular views but a deep breath is hard to come by.  Especially if you’re old, like my masters.  Like many ski resorts this time of year, Vail is in “slack” season which means many of the shops have reduced hours and there are fewer people around to scratch my stomach and tell me how cute I am.  The upside is that it’s easy to get in anywhere and the trees are turning.  Some of you may think we dogs don’t notice such things but we are a lot more interested in molting leaves than you might realize.

The following day we drove around the area and marveled the the magnificent scenery.  After a summer in the desert breathing dust and looking at scorched earth, the greenery and lush vegetation seemed like Heaven.  I peed on lots of it – just because I could.   What wasn’t a welcome relief was the weather – the temperature hit 90 degrees when we were there.  90 degrees at 8,000 feet altitude is enough to make a guy pant uncontrollably.  Extra ice 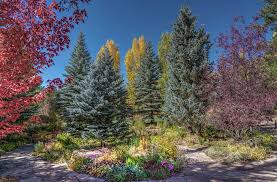 cube treats were in order.   We saw some beautiful golf courses (that my master lusted over) and some fancy boutiques that my mistress drooled over.  That’s pretty much what Vail has to offer in the off-season.  Unless you want to make that hike up the mountain and ruin the lining of your lungs.  Me, I’m happy just bellying up to the bar and quaffing a beer.  I can almost smell the fish and chips.