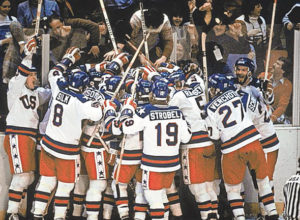 This past weekend we observed the 40th anniversary of the “Miracle on Ice”, when the US Olympic hockey team beat the Soviet Union in a shocking upset.  I’ve read a few articles about that game and how uplifting it was to our national psyche.  Of course I remembered the game – it was actually the first hockey game I ever watched – but I had forgotten how dismal our morale was at the time.  The preceding years had brought us the Vietnam War, Watergate, raging inflation and blocks-long lines to get gasoline.  A regular smorgasbord of misery.  President Carter, six months prior, had given a speech wherein he spoke of our collective “crisis of confidence”.  But then our hockey team, overwhelming underdogs, did the impossible and suddenly we all felt better.  We regained a bit of our swagger and once again, Americans felt anything was possible. 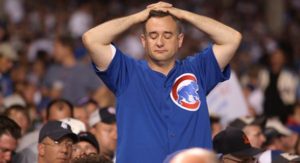 Turns out that identifying with a sports team, Olympic or otherwise, can have great psychological benefits.   Adam Earnhardt, co-author of “Sports Fans, Identity and Socialization: Exploring the Fandemonium.” points out that walking in a mall wearing a team cap or shirt instantly connects you to others fans of the team.  In that sense, your favorite team can serve the same purpose as church and family, fostering a sense of belonging.  I can attest to this.  My husband is a huge USC football fan and has struck up conversations with complete strangers who are wearing a Trojan logo.  One time he stumbled on the father of a recent draft recruit in the grocery store and the conversation went on for an hour.  No amount of my hinting about melting ice cream could deter the two of them from re-living every game from the past season.  Scholars who study “fandom” have also found there is no correlation between being a fan and a winning record.  Oh sure, there are bandwagon fans who jump on when times are good but a true fan is consistent through thick and thin.  One need look no further than the Chicago Cubs for an excellent example of this phenomenon. They had longest time between World Series wins – 108 years 19 days.  Their 2016 championship was one for the ages.  Lots of people were suddenly sporting Cubs hats, shirts and beer cozies.  But the true fans had supported the team all of their lives.  We know people who cried tears of joy and lamented that a long-lost relative never lived to see the Cubs win the Series.  Those life-long fans shared a joy and sense of redemption that could only be imagined by the rest of us. 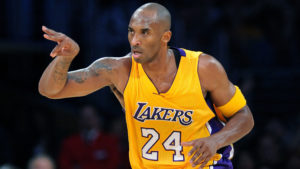 The other aspect of “fandom” is the idolization of a particular athlete vs a team.  There may not be a better example of this than the LA Lakers.  The Lakers are synonymous with the Southland, but when you think about the team one most often congers up one of the all-time great players: Magic, Kareem, Kobe and Shaq.  Our collective reaction to the tragic death of Kobe illustrates the flip-side of being in the “sports community”.  Today, as the memorial service takes place for Kobe and his daughter Gianna, we will mourn their loss.  In grieving, we will, once again, have a shared moment.

Mostly, I think sports and athletes can be an uplifting balm for whatever ails us.  From football to curling, celebrating a win or bemoaning a loss can bring us together with complete strangers.  These days, I’m for anything that can accomplish that.