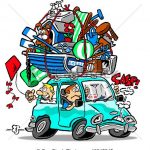 If it’s summer in Arizona it can only mean one thing – get out of town!  I usually look for some signs to tell me when it’s time to leave.  This week we got two – one expected and one, well, out of this world.  The expected sign was in the form of heat.  While the rest of you are enjoying the lapping of an ocean wave or the rustling of a quaking aspen, what we hear all summer is the constant thrummmmm of the air conditioner.  This past week we’ve not only had the usual “summer has arrived in Arizona” heat but staggering, breath-sapping inferno temperatures.  To add to the fun, there was an air quality alert the past four days.  So, not only did we have temperatures that looked more like a steak order, but the air looked like Los Angeles in the 60’s.  Somehow I think that when you can see the air you’re breathing it’s a sign – and not a good one.  We have a lot of travel plans this summer – Denver, Central Coast of California, Mammoth Lakes and Sun Valley – but it took the second sign to put our travel plans into action.

Last Thursday morning, at 4 a.m., we were startled out of a sound sleep by a loud “boom”.  My husband also saw a bright light flash.  I figured the light was the newspaper truck circling our court.  But I couldn’t account for the sound.  Of course, when you’re awakened in this way you are confused about what you heard.  Did the newspaper guy run into the house next door?  Or was it someone breaking into our house?  Ever on the alert, my husband grabbed a flashlight and a bat from under the bed and set out to discover what caused the noise.  Dash the Wonder Dog and I laid our heads back down on the pillow but, of course, sleep is impossible under these circumstances so I decided I’d go help find the culprit.  I grabbed the phone so I could call 9-1-1 and caught up with my husband.  There we were, in the pre-dawn darkness, skulking through our house on tip-toe looking for someone who, ostensibly, was large enough to knock down the garage door to enter our house. This was not going to end well.   Slowly we creeped through the whole house and found nothing.  My husband decided to venture outside but since we just found a rattlesnake in our yard last week, I held sentry at the front door.  There was no sign of an intruder so we put down our bat and phone and decided to brew coffee. 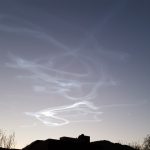 We stood in our kitchen, wondering what the sound could have been, when my husband looked out the window and saw what appeared to be contrails in the sky.  I captured it with my camera (picture right) and we surmised it was a plane of some sort that may have crashed.  But when we turned on the news we discovered that Arizona had experienced an asteroid explosion!  Now that’s something you don’t see every day.  Sure enough, the sound we heard was a sonic boom when the asteroid fireball broke apart.  Later in the day NASA officials confirmed that it was a small asteroid, about 10 feet in diameter, that had entered the Earth’s atmosphere near Payson, Arizona.  They estimated that the object was moving at more than 40,000 mph when it sped across the sky.  What everyone who was up early saw (and what I captured in my photo) was the smoke trail of the fireball – the winds of the upper atmosphere had caused the trail to twist and turn.  I learned a lot about asteroids on Thursday, mainly that they happen all the time.  They are considered to be “space debris,” or leftover fragments from the formation of the solar system.  Kind of like the spare parts left over from the bed you bought at Ikea.  There are millions of asteroids orbiting the sun, 750,000 of which are found in the asteroid belt located between the orbits of Mars and Jupiter.  This week scientists have been scrambling to find the scattered bits of the asteroid so they can examine them more closely.  Their fear is that amateurs with their metal-detectors will find them first and they’ll end up on someone’s nook so the finder can say at the next neighborhood BBQ, “Hey, want to come see my asteroid?”.  In any event, these remnants tell scientists about the formation of the solar system so hopefully NASA will find them and we’ll know once and for all whether there are little green men on Mars.

As for me, I think when the universe starts throwing rocks at you it’s a sign, so this week we’re beginning our summer travels.  Stay tuned.