I was watching TV the other day when an ad came on for the new comedy, “Call Me Kat”, starring Mayim Bialik.  It was advertised as “the funniest new show on television”.  Well, heck, I love a good comedy and I always enjoyed Ms. Bialik on The Big Bang Theory, so I gave it a shot.  My time would have been better spent sorting my sock drawer or alphabetizing my spice rack.  Not funny.  Not even close to funny.  Slapstick, stupid humor, and preening for the camera seemed to be the objective.  Not to mention Swoosie Kurtz’ distracting plastic surgery. When you’re almost unrecognizable I think it means you’ve gone too far.  Anyway…the show just didn’t do anything for me.  When I heard the news of Cloris Leachman’s passing this week I thought about her on The Mary Tyler Moore show and it reminded me of when TV was actually funny.  In my opinion, the “murderer’s row” of comedies that aired on CBS in the mid-70’s was the pinnacle of humor.  Every Saturday night we were captivated by high quality writing and acting.  We didn’t know how lucky we were. 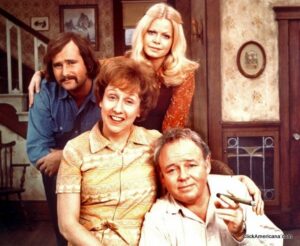 The evening started with All in the Family.  We thought it was quite daring when it first aired, with the main character, Archie Bunker, opining on everything from  racism to women’s liberation.  It was the only comedy show that opened with a warning about content.  For a generation that grew up watching Leave it to Beaver, All in the Family seemed downright revolutionary.  And that was the point.  The show’s creator, Norman Lear, wanted to reflect the changing times by having Archie bicker about the issues of the day with his progressive son-in-law, Mike, or as he referred to him, “Meathead”.  As logically as Mike would try to explain the changes in social norms, Archie would respond with equally inane logic.  The cast was rounded out by his “dingbat” wife, Edith (who was actually quite smart), and his daughter, Gloria, caught between her dad and her husband.  The show, and Archie, evolved over time, matching the tone of the era.  Not least among its groundbreaking feats was that it was the first to air the sound of a toilet flushing!

Next on the schedule was M*A*S*H.  Ostensibly a show about a Mobile Army Surgical Hospital unit during the Korean war, the satire and dramatic commentary of the show were clearly aimed at an audience that had grown ambivalent about the war in Vietnam.  The show ran for 12 seasons – and its finale in 1983 is still the highest rated series ender.  M*A*S*H seemed to have everything you could want in a comedy.  Yes, there was great humor, but often there was a sentimental story line that ran concurrently to Hawkeye’s antics.  Unlike McHale’s Navy or the Phil Silver’s Show from the previous decade, M*A*S*H showed real people with real emotions.  It wasn’t unusual to laugh and cry at the same episode. 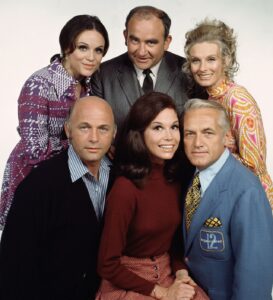 The second hour of comedies started with the classic Mary Tyler Moore Show.  The casting on the show was brilliant.  In addition to Mary Tyler Moore, it included the aforementioned Cloris Leachman, Valerie Harper, Ed Asner, Ted Knight, Gavin McLeod, Gloria Engel and…Betty White.  How can you ever go wrong with Betty White?!  As a young woman in my 20’s I was fascinated by the show’s premise – a divorced, young woman living on her own and forging a career in a tough industry.  Over the years I’ve heard other women say how influenced they were by watching MTM stand up for herself and succeed in her professional life.  Also of note is that although Mary had several boyfriends during the course of the series, she never married.  That is something you certainly didn’t see in previous sitcoms and it is still rare today to have the lead female character never marry during the run of a series.

The next show on the schedule was The Bob Newhart Show.  Newhart played a psychiatrist and brought his dry wit and deadpan delivery to the show.  His patients and support staff delivered the comedy and hijinks, while he sardonically commented and observed.  Suzanne Pleshette played his wife, also with a sarcastic bent and intelligent wit. 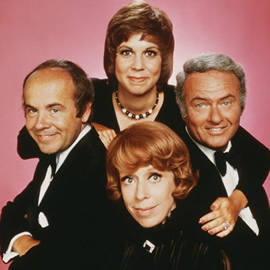 Finally, the evening ended with The Carol Burnett Show.  Has there ever been a more entertaining variety show?  Carol Burnett just seemed so down to earth and friendly – almost like your best friend was hosting a neighborhood talent show.  Her portrayals of “Eunice”, Mrs. Wiggins and, of course, her “Went With The Wind” Scarlett are funny to this day.  But the highlight for me was the pairing of Tim Conway and Harvey Korman.  They delighted in trying to “bust” each other during the live show taping.  Part of the fun was watching Korman trying not to laugh when Conway pranked him.  The funniest sketch I have ever seen is the famous “dentist” scene, with Conway as the dentist and Korman as the patient.  Conway improvised so much during the taping that Korman admitted later that he laughed so hard he wet his pants.  Here is a link to the complete skit – it’s almost 10 minutes long but worth watching to the end.  If you aren’t laughing hysterically by the end of it, well…there’s just something wrong with your funny bone. https://www.youtube.com/watch?v=9IUSM4EKcRI

So that was it – the funniest night of television ever.  Yes, the NBC Thursday night line-up in the 90’s that featured Seinfeld, Friends and Frasier was also very good, but just not as funny or relevant as that old CBS schedule.  I read an article that observed one of the reasons for the popularity of the old CBS shows was that we didn’t have much choice.  Most people only got 4-5 TV stations in the 70’s, so we tended to watch the same things.  Each of these shows contributed to the common culture because we all shared the laughs, tears and experiences of these characters.  Today, with 500 TV stations plus a seemingly endless number of streaming apps, our viewing is fragmented.  Some days I’m lucky if anyone has even heard of a show that I’m streaming.

There’s a lot of talk about bringing unity to the country these days.  Maybe we should consider going back to fewer shows, with better writing, that would give us an opportunity to have some shared experiences.  Plus, it could give us something laugh at other than the politicians.