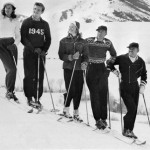 Well, if it’s September, we must be going to Sun Valley. Yep, like lemmings to the sea, each September we migrate to Idaho in search of great hiking, spectacular golf, and cooler air. That last part becomes very important this time of year – our lows in Scottsdale last week averaged 84. The 10 day forecast for Sun Valley has the lows in the 30’s. I may just sit outside in the mornings with a cup of coffee until ice forms on either it or me.

Friends often wonder why we return to Idaho every year. People who haven’t been there usually ask something along the lines of, “Oh, do you have to go see family”? Like it is some obligatory trip that we take to an ugly part of the country to see people we don’t much like who require that we sleep on a hide-a-bed in their basement. But people who have been lucky enough to visit Sun Valley ask us if they can climb into our suitcase. Since its inception it has been the playground for many celebrities – Ernest Hemingway lived (and died) there and Gary Cooper and Clark Gable made regular visits to ski and hunt. Since we’ve been going there for 26 years we’ve also seen our share of modern-day movie stars, although they don’t seem quite as big as Cooper or Gable. Maybe some version of that line from “Sunset Boulevard” applies here – the scenery is the same, it’s the stars who have gotten smaller. My husband spent 30 minutes talking to Arnold Schwarzenegger once about tax policies in California, but even though he’s big, I’m not sure he counts as a “star”. We’ve seen Candice Bergen, Muriel Hemingway and I once ran across Jamie Lee Curtis in a store. I was tempted to tell her that the Activia really wasn’t working for me but then my better angels prevailed. 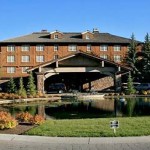 From the outset, the Sun Valley resort was marketed as a haven for the rich and famous. It was developed by Averell Harriman, who was chairman of the Union Pacific Railroad in the 30’s. He was an avid skier and after the success of the Lake Placid Olympics in 1932 he correctly assumed that Americans would develop a keen interest in winter sports. Harriman had the idea of building the first destination ski resort in the U.S. in a place so remote that – what a coincidence – the only way to get there was via the Union Pacific Railroad.  In 1935 Harriman hired an Austrian count, Felix Schaffgotsch, to travel across the western United States to find the perfect setting for a ski area. When Schaffgotsch visited Ketchum, Idaho he decided that the combination of good snowfall, sunshine and the perfect ski mountain was where Harriman should build. Harriman started construction immediately and then hired a marketing genius to spread the word. Harriman was afraid that people would not be attracted to the cold climes of Idaho, so he named the resort “Sun Valley” to conjure up images of warmth and coziness. He installed the world’s first round swimming pools to garner more attention and they did.  Sun Valley took off as a locale synonymous with great skiing, fine dining and first-class entertainment.

But the really interesting history of Sun Valley lies in the story of the ski school. Count Schaffgotsch helped Harriman attract the top ski instructors in the world, including Friedl Pfeifer. Pfeifer was Austrian and not only the most famous downhiller in the world, he also managed to carve out time to teach between racing circuits. His pupils ranged from the famous (Claudette Colbert) to the infamous (Rudolph Hess). In 1937 he fled Austria weeks after Hitler’s invasion and was lured to Sun Valley, just in time for the opening of the ski school. As it turns out, Schaffgotsch was a huge admirer of Hitler and among the Austrian instructors he recruited to Sun Valley were several avowed Nazis. From 1937 to the outbreak of the war, they put Sun Valley’s ski school on the map and, despite the instructors’ political leanings, people flocked there by the thousands to learn from the very best. 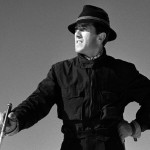 But the shadow of World War II loomed large. Once the war broke out, Schaffgotsch and several other instructors returned to the “Fatherland” to enlist in Hitler’s army. Schaffgotsch joined the SS and while he was in Italy he received a letter from Harriman letting him know that his duties were complete at Sun Valley but that he was welcome as a guest at any time.  The day after Pearl Harbor was bombed FBI agents from Salt Lake City descended on Sun Valley to investigate reports of Nazi sympathizers among the ski school staff. Three of the most prominent instructors were arrested, including Pfeifer. Pfeifer and several other Austrian instructors enlisted in the U.S. Army and had distinguished war records as part of the 10th Mountain Division.

In 1942, Harriman offered up the Sun Valley Lodge to the Navy to serve as a hospital for both officers and enlisted men. He thought the quiet and solitude of this remote mountain village would sooth their war sufferings. Most of the men enjoyed the peacefulness of the Wood River Valley, but some found the isolation difficult. No matter, the resort remained in service to the Navy until war’s end and did not re-open until the spring of 1946. Most of the instructors came back to Sun Valley after the war and were instrumental in advancing the burgeoning ski industry. Pfeifer returned to the U.S. and settled in Colorado where he helped found the Aspen ski resort.   Ironically, Schaffgotsch was killed in Russia during Harriman’s stint as our ambassador to that country.

In 1995 we were lucky enough to be in Sun Valley when a memorial to the 10th Mountain Division was erected on the Sun Valley grounds. We watched as several elderly men, some in uniform, paid tribute to their fallen comrades. They were a spry and inspiring group, unbowed by the years with their physical prowess still much in evidence. As far as I’m concerned, they were the biggest stars we’ve ever seen in Sun Valley.

And speaking of stars, let me pass along a friendly reminder to ‘Like’ my brother’s video (every 24 hours) at the link below: