It’s that time again, when we present you with holiday gift ideas for those people on your list who are hard to shop for.  Or who you don’t like.  You choose.  I’d say the only requisite is that they have a sense of humor.  And if they don’t – why are you giving them a gift anyway?

For the egocentric: What could be more thoughtful than giving someone a picture of themselves on a potato?  Although it has some cannibalistic overtones, you can rest assured than your gift will be unique. And with some butter and a ton of sour cream, it might even be tasty. 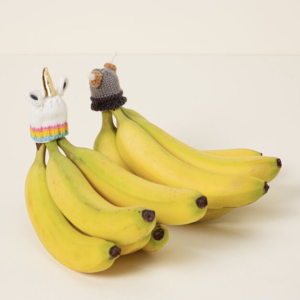 For the smoothie fan: Nothing is more annoying than when you go to make a smoothie only to discover your banana is overripe.  When that happens to me, I give up and grab a piece of chocolate cake, but I understand that some people like to eat fruit.  Enter a guy who is selling “banana hats” at $13 a pop.  It’s a plastic top, covered with a knit hat.  He just secured a deal on Shark Tank.  Really.  Who sits around and thinks of these things?  All I know is, next year everyone on my list is getting a knit hat for their bananas.

For your reckless brother-in-law: Let’s face it.  Some people are just not cut out to be parents.  Your brother-in-law may be one of those people.  Normally he might tell his kids to go play on the freeway, but if you want him to be a more responsible parent, why not give him the “My First Fire” kit?  That way, the kids are safely in the backyard and your brother-in-law can watch them without setting down his beer.

For the romantic: Candles are considered romantic.  It’s hard to find a romantic movie where candles don’t appear at some point, either around a bathtub or next to a bed.  Well, what could be more romantic than a candle made of your ear wax?  It exudes your essence even when you’re not at home.  Who could resist?

For the Toto enviers:  A few of my friends have the Toto toilet that apparently does everything for you but go to the grocery store.  They rave about the heated seat, the warm water and the blow dry.  Frankly, I’ve never seen the benefit as my goal is to spend as little time in the bathroom as possible.  But then again, I’m not a guy.  So for the person who does spend a lot of time but doesn’t want to splurge on the Toto toilet, you can get him the Roto Wipe.  My guess is it works just about as well at 1/1000 of the cost. 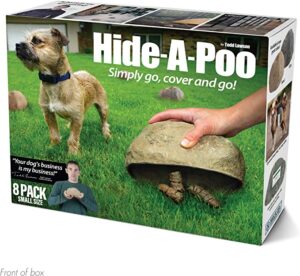 For the dog owners who entertain:  You spend hours preparing for a dinner party – cooking a gourmet meal, setting a gorgeous table, fresh flowers – and then just before the guests are due to arrive you notice that your dog has done his “business” on the lawn.  Who has time to go get a bag, scoop it up, and take it to the trash?  Instead, you can employ the “Hide a Poo”, a device that looks like a rock and covers up the whole mess.  You’re on your own when it comes to masking the smell.  Hopefully your guests have bad allergies.

For the TV news watcher:  I don’t care what news channel you watch, at some point someone is going to say something ridiculous.  This is especially true if a politician is speaking.  How handy, not to mention cathartic, would be it be to have a BS button?  I think ours might wear out in the first week.  Perhaps you may want to purchase back-ups.

For everyone: Let’s face it, 2022 has not lived up to our expectations.  If you had told us in 2020 that we’d still be fighting COVID, but added in RSV, we would not have believed it.  Throw in the rising cost of everything, Ukraine, the death of Queen Elizabeth II, and the mental images from the Johnny Depp trial that cannot be erased from memory, I think 2022 has a lot to answer for.  But just in case you know someone who thought this year was just nifty, why not give them an ornament to commemorate the smorgasbord of misery?

That’s it.  If you’re actually interested in any of these gifts they can be found on Amazon.  You can thank me later.