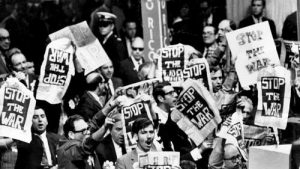 I had a hard time getting to sleep the night of the Dallas police shootings   I kept thinking about 1968, and how the events of that seminal year affected our society for years to come.  The next morning I heard several news commentators make the same comparison until someone (I forget who – I can remember 1968 but not last week) reminded us how bad 1968 really was.  It was a year that began to show the fissures in our society and a seismic shift in our values.  The Vietnam war was raging – both Mai Lai and the Tet Offensive occurred that year and we lost more men (16,592) in 1968 than any other year of the war.  Martin Luther King and Bobby Kennedy were assassinated, we saw the demise of Lyndon Johnson and the rise of Richard Nixon, the Zodiac killer terrorized the San Francisco area, North Korea captured the submarine Pueblo and kept the 99 member crew hostage for eleven months.  Finally, violent riots broke out at the Democratic convention in Chicago.  It was a really bad year.

As easy as it is to think about 1968 in rather dark tones, that year was also jam-packed with social, economic and entertainment “firsts”.  We here at From A Bird’s Eye View, in an effort to bring you some lighter memories of that year, bring you the following highlights:

I write this just as the political conventions are about to take place so I don’t know what will happen – hopefully just peaceful protesting.  It’s hard not to be apprehensive; to hope that we don’t see rioting and injury.  I will endeavor to remember that 1968 had problems, but it also had breakthroughs. After all, it was in 1968 that Paul Lynde entertained us on Hollywood Squares.  Who knows, perhaps in 50 years we’ll look back at 2016 and despite the problems, we’ll remember the nuttiness of Pokemon Go.