Disney it was not

Today in Chitwan was a day to explore elephants . . . in detail, but first our canoe trip down a muddy river. It did not stack up favorably to the Disney’s Jungle Cruise. No monkeys climbing trees, no hippos spitting at us, no alligators, not even some stupid jokes. Our guide did say that there was a Kingfisher bird way off in the distance somewhere, but I’ll be damn if I saw him. The canoe trip mercifully ended with nary a sighting if you don’t count the log that looked like part of an alligator.

We then headed to the EBC, the Elephant Birthing Center, which was actually fairly interesting and one of the premier elephant breading centers in the world and boasts the birthing of the world’s only set of elephant twins. There were several baby elephants wandering around the grounds that you could actually touch and feed grass to, which I did. We next headed to the elephant bathing area, where we watched the trainers lead the elephants into the river then jump on their back with a brush and give them a good scrubbing. It was sort of like an elephant car wash – I think a wax and pedicure was extra. 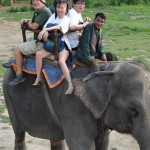 “Does this elephant have reverse?”

After lunch we did an elephant safari. Four people crammed into a wooden orange crate on top of an elephant – very uncomfortable, especially if your elephant needed a realignment or it’s tires rotated, which ours apparently did, as it was a very bumpy ride.  I like elephants, they may be my favorite animal, what with their size, strength and good memory, but I don’t think the elephant enjoyed this any more than we did.  We spent an hour and a half wandering through the jungle in search of wild animals. We saw a dog. I was riding facing backwards, so most of the views I had were of the elephant’s ass. Actually we did see a one-horned rhino mother with her baby. The one-horned rhinos are called Indian rhinos because they are found in the Indian/Asia area, as apposed to the two-horned rhino, which are found in Africa. Unlike the India/Africa elephant, it is easy to tell the Indian from the African rhino . . . JUST COUNT THEIR HORNS!!!

Our safari lasted an hour-and-a-half, by which time my legs were numb and we had no more chance of seeing a Bengal Tiger than we did of seeing a Detroit Tiger, or Tiger Woods or Tony the Tiger for that matter. If elephant safaris were given as prizes and the hour-and-a-half safari was the first place prize, second prize would be a three-hour safari.

The trip was made easier by our safari mates, a very fun Malaysian couple from Kuala Lumpur. They entertained us throughout our safari as well as at dinner back at the hotel that night. He says that he is a Malaysian first and a Chinese second, but that he’s really a ‘banana’. Banana? I asked. Yes, that’s an Asian (yellow on the outside), who is really like an American (white on the inside). 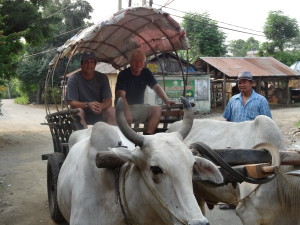 The next morning we took an oxcart ride through several villages close to our hotel – I felt like I was a runner-up for Mr. Chitwan Congeniality, waving to the masses as we passed through their village.

We boarded Buddha Airlines for the short flight (18 minutes) to Kathmandu where we checked into the Shanker Hotel – I know it doesn’t sound healthy, but it’s actually a 5-star hotel – a far cry from the teahouses in the Himalayans that we were staying in, although I miss the teahouse’s charm.

Thank you all for your prayers and well-wishes for Dana – the last I heard she had a balloon, rather than a stint, put in and is now home and feeling great.