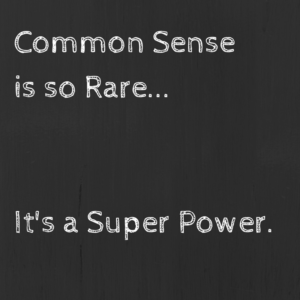 Lately I’ve been thinking about common sense, mostly because there seems to be such a staggering lack of it.  So I decided to take a closer look at a phrase that is ubiquitous but not really well understood.  As far back as the early Greeks philosophers people were trying to define behavior or reasoning that society in general could agree was “common”.  But as Voltaire concluded, “Common sense is not so common”.  Merriam-Webster defines it as, “sound and prudent judgment based on a simple perception of the situation or facts.” Thus, “common sense” equates to the knowledge and experience which most people have, or which the person using the term believes they do.

And therein lies the problem –  the words “most people”. Until the past decade or so our society has been able to broadly agree on behavior or actions that would be acceptable to “most people”.  A few months ago I read an article (author’s name has escaped my memory) arguing that the divisiveness that we are experiencing on a grand scale these days has eroded our common sense because we have less and less in common.  I think about that article when I turn on the news at night. I sure don’t know how we got here but I did receive an email the other day called “An Obituary for Common Sense” that’s been around a while but I found some portions worth sharing:

“Common Sense lived by simple, sound financial policies (don’t spend more than you can earn) and reliable strategies (adults, not children, are in charge). Its health began to deteriorate rapidly when well-intentioned but overbearing regulations were set in place. Reports of a 6-year-old boy charged with sexual harassment for kissing a classmate; teens suspended from school for using mouthwash after lunch; and a teacher fired for reprimanding an unruly student, only worsened his condition.

Common Sense lost ground when parents attacked teachers for doing the job that they themselves had failed to do in disciplining their unruly children. 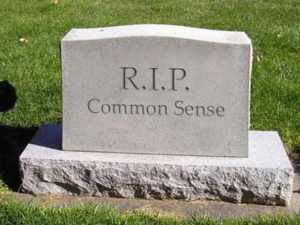 Common Sense finally gave up the will to live, after a woman failed to realize that a steaming cup of coffee was hot. She spilled a little in her lap, and was promptly awarded a huge settlement.

It is survived by his 4 stepbrothers:

Not many attended its funeral because so few realized it was gone.”

I thought this article was pretty entertaining, but there are a few trends I’d like to add:

“If it only helps one person…” 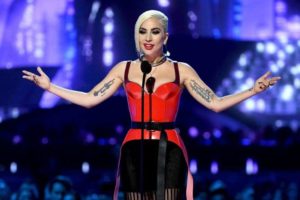 Tattoos.  One look at Lady Gaga’s arm tattoos and one can only imagine those arms at 65.  I hope I’m alive to witness it.

Clearly Common Sense, if not dead, is on the decline and I have a theory why.  For generations Americans worked hard to figure things out –  using logic, reasoning and common sense to make decisions.  Now, every answer is literally in our hands.  Too many of us aren’t learning how to gather facts and come to a logical conclusion because Google does it for us.  Too many people rely on social media for their research and news, following the herd right off the end of the cliff.

I’m not sure I’d get a lot of support for this but maybe we should give up the phones and go back to the Encyclopedia Britannica.