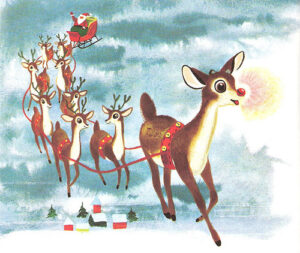 Do you ever really listen to the lyrics of Christmas carols?  I do; and we’ve certainly had plenty of opportunity since Halloween, as radios and department stores remind us that it ‘tis the season’.

Some of you will remember a short while back when the lyrics to ‘Baby It’s Cold Outside’, were assailed by the ‘Me Toos’ for manipulative tactics of a guy using the cold weather to keep a female from going home on a cold winter’s night.  So why isn’t someone outraged when it come the Rudolph the Red-nosed Reindeer?

Sure, on the surface it seems like a benign enough, feel good, Christmas carol, about a reindeer that helps Santa and the other reindeer, find their way to our homes on a foggy Christmas Eve.  But have you ever really listened to the lyrics?

They never let poor Rudolph play in any reindeer games

I don’t know about you, but this sounds like bullying to me – laughing at him and calling him names and excluding him from whatever games reindeer play.  But once Santa and the reindeer realize that what makes him odd, his bright shiny red nose, is now a benefit to them; well . . . 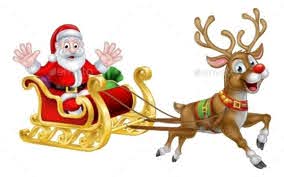 Then how the reindeer loved him, as they shouted out with glee

Rudolph the red-nosed reindeer, you’ll go down in history

There’s more.  It is a little-known fact that both male and female reindeer grow antlers!  Males drop their antlers in November, leaving them without antlers until the following spring, while females keep their antlers through the winter until their calves are born in May. 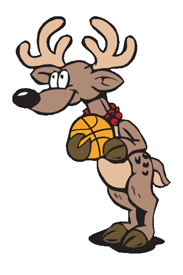 Cupid keeping the ball from Rudolph

Pictures of Rudolph and the rest of the reindeer typically show them pulling Santa’s sleigh, so we can reasonably assume that it is the month of December and thus a male reindeer would have no antlers.  The pictures of Santa and his reindeer almost always show all the deer but Rudolph, with antlers; so since the pictures are in December, we know that Comet, et. al, are all female.  Pictures of Rudolph are mixed, showing him/her both with and without antlers.  So, his name, Rudolph and the song’s lyrics referring to ‘him’ or ‘he’, would suggest that he is a male, but antlers would tell us that she is female.  That’s OK to be questioning, but it makes one wonder if this, in fact, is the source of the bullying by this team of catty reindeer.

And of course no one ever thinks about what happens after Christmas Eve, when there is no longer a need for Rudolph and his scarlet beacon.  One can only surmise that by Christmas Day the reindeer have probably return to their malicious name-calling.  I envision the reindeer playing a pick-up game of 4-on-4 basketball, as Rudolph sits on the sidelines, watching and hoping that next Christmas Eve will also be foggy.

OK, I admit it, I have too much time on my hands!