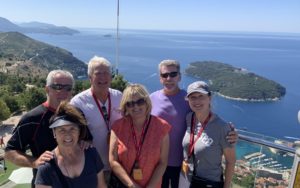 Dubrovnik from the top of the cable car

I read the above quote with some skepticism – could this ancient city really be more like paradise than say, Bakersfield? But after being totally amazed by Montenegro, I was open to believe anything about this scenic Dalmatian Coast. I became a believer – Dubrovnik is beautiful. We had a tour guide here, but it was not a private tour (as we had become accustom to), rather there were about 18 of us in a ‘Cable Car/Walking Tour’ of the city. It was actually a fairly good walk just to get to the bottom of the cable car, but we managed to get ourselves into a gondola and up to the top of the mountain. The view was spectacular, as we took in the entire walled city of Dubrovnik as well as miles of beautiful coastline both north and south. We took the requisite photos, visited the gift shop and headed back down for a guided tour through the walled city.  After visiting a number of historical sites, we were left on our own to either ‘walk the wall’ or not.  As a group we decided that it was too hot and the wall provided no shade, so each couple went their own way.  The Wall kept calling me – it is the second longest wall in the world (behind China’s), so I decided that I wanted to at least walk a little part of the wall.  I paid 8 Euros and took the steep stairs to the top of the wall.  I decided I’d just walk out to the the part of the wall that was on the coast.  It was spectacular!  I continued around and by the time I was half way around I figured I’d complete the circuit around the entire city.  It was 3.4 miles, which felt like 13.4 on this hot, humid day, but I’m glad I did it . . . although I’m not sure why.  It’s hard to believe that this country just had its ‘War of Independence’ with Serbia in the 90s, yes the 1990s! 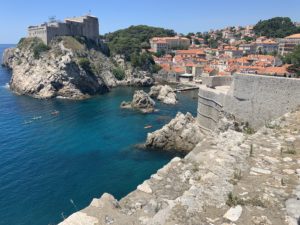 And yes, this is the location for much of the filming of Game of Thrones.

Dubrovnik, Split and Koper, Slovenia are only a few hours drive apart, but our ship took all night to get between them – I think we took a wrong turn.  In Split we took a golf cart tour of the city and surroundings, finding it to be a hip city with great beaches.  Koper, Slovenia, the home of our first lady, is another smaller, ancient city with old buildings that, at this point, we probably had our fill.

Our next and final stop on the cruise was due west across the Adriatic Sea to Venice.  We had arranged another walking tour of the city, where we had a very knowledgeable guide describing the many aspects of the city as we wound our way through the narrow cobblestone sidewalks.  The tour ended with a gondola ride and afterwards we found a great restaurant and enjoy a true Italian lunch of some of the best pasta we’d ever tasted along with a nice glass of Chianti. 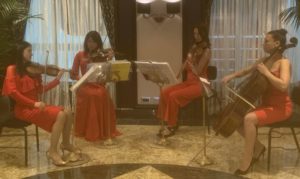 Meanwhile back on the ship: The best entertainment on board , in my opinion, was a group called Smile String Quartet, a group of attractive Ukraine women who played violin, viola and cello.

Our travels home provided the longest 4th of July I’ve ever experienced.  We disembarked in Venice at 8:00 a.m. on July 4th and got to LAX at 8:00 p.m. – on paper it looks like 12 hours, but add the time change and it was a 21 hour trip home.  We were surprised that everyone here seemed very excited to see us – we were greeted with a fireworks welcome.

As those who read our blog know, I love travel; seeing new places and understanding how different people live is always interesting and educational, but I have to admit that one of the great aspects of travel for me is gaining an appreciation for our own country – it is always great to get home.

Thanks to Jack & JJ Budd and Chuck & Linda Sager for being great travel companions and making the trip that much more fun.  Thank you to wife, Linda who mostly puts up with my antics.  And thank YOU for coming along, especially thanks to those who made comments to let me know I didn’t leave you behind.

Get rested up as we have another trip planned with another group at the end of the summer – hope you can join us.