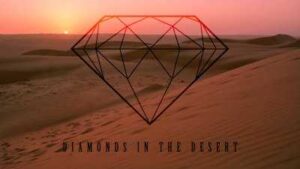 Diamonds in the Desert

Before desert temperatures reached the triple digits, we made two last treks to two different deserts in March to visit our diamonds in the deserts.

Our mid-March trip took us to some old haunts surrounding our Marriott Desert Springs Palm Desert timeshare.  Yes, there was plenty of golf, dining, and stories with the ‘Great Eight’ – the Budds, the Sagers and the VanBoxmeers (Linda and I would make eight in case you were wondering about the math!), but it was the other people we met, that live there, (at least part-time) that turned the trip from great to awesome! 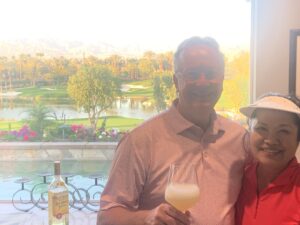 Diamond One!  We were invited to dinner at the home of Ed & Stacy Hunter, who live, during the winter, at Indian Ridge Country Club, a private golf club that has two magnificent golf courses and beautiful and immaculately kept grounds.  The Hunter’s home sits on a ridge with an amazing view of the golf course (the attached photo doesn’t do it justice).  Ed collects wine and whiskeys, and suffice it to say that we certainly consumed more than our share, but didn’t put a dent in his stash.  Stacy is the consummate hostess, serving an exquisite tray of charcuterie followed by a delicious dinner.

Diamond Two!  Two days later, we were invited for dinner at the home of Walt & Patty Schwartz, at Trilogy at the Polo Club in Indio, next to the Plantation Golf Club, which could be the subject of a future blog.  And while the view may not have been as grand, with Walt playing the consummate ‘straight man’ for Patty’s razor-sharp wit, the evening was filled with many stories and much laughter.  Oh yeah, and a magnificent charcuterie tray and another delicious dinner with plenty of wine. 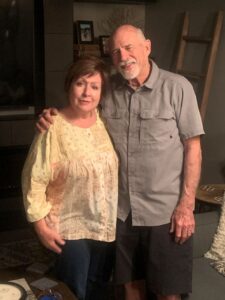 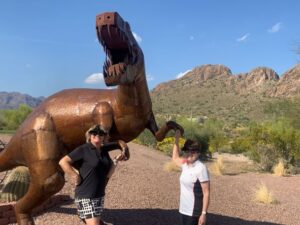 Diamond Three!  Three days after returning from Palm Desert we set out for the Sonoran Desert, which includes much of Arizona.  Our first stop was Apache Junction, and a visit with Linda’s sister and husband, Starlet & Donnie Brummer.  Starlet’s daughter, Denise and her husband, Gene Cobb were also visiting from Minnesota and are always great to be around.  Friends, Bill & Kay Pompei, from Minnesota, who also spend the winter in Arizona stopped by for dinner and cards.  Kay provided me with several subjects for future blogs – thank you!  The following day, Starlet, Linda and I played one of the best golf courses I’ve ever played, Dinosaur Mountain at Gold Canyon.  Not only was the golf course magnificent, but the surrounding mountains and spectacular homes on the course were jaw-dropping.  A picture-perfect day made it the most enjoyable round of golf in a long time.  If you have a chance, play this course, you’ll love it! 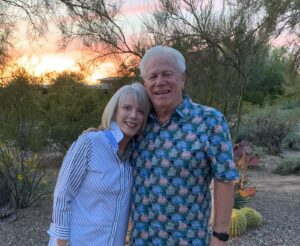 Diamond Four!  Four days into our trip we made our final stop at Scottsdale’s beautiful golf community, Desert Highlands to visit my sister and co-writer, Suzanne and husband, Alan Watson, as well as ‘Dash the Wonder Dog’. While Suzanne and I text, talk or email weekly, we rarely get a chance to see each other, so it’s always special when we get together.  When I explained to her that I was writing this week’s blog about our visits to our ‘Diamonds in the Desert’, and that our visit with them would be number four, she replied, “I hope you don’t label us as the ‘Cubic Zirconium’ visit!”  Not a chance!  We had a great time visiting and then dinner at their beautifully remodeled golf club house, as the sun set beneath a beautiful ‘Arizona red’ sky.  The perfect ending to the many facets of our visit to our Diamonds in the Desert. 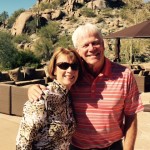 Suzanne and Alan had their turn in the barrel last weekend – it was their turn to host Alan’s golf group.  It was also a good excuse to celebrate our father’s 101st birthday (although he’s been gone for 14 years) as well as Valentine’s Day. As it happened Linda and I were looking to go to Arizona to see her sister and mine. It was a chance for us to get out of this blustery winter in Southern California (the temperature had dropped below 70 for two straight days!) After a short visit with Linda’s sister, Starlet and husband, Donnie in Apache Junction (I’m sure the visit didn’t seem short to them, they fed us dinner, gave up their bed for the evening and fixed us breakfast the next morning), we headed off to see Suzanne and Al in Desert Highlands. Thank you Donnie and Starlet!

Desert Highlands is a very exclusive gate-guarded golf community in northern Scottsdale, where they’ve lived for the past 15 years. We’ve been there a number of times before and it’s always been great to get together with them, but this time it seemed particularly up-scale. 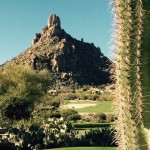 My view from the ‘transition’

The party on Saturday was exquisite – Suzanne and Al have a beautiful home on the 5th hole of the golf course with an expansive view of the surrounding mountains. They had enough food to feed an army and enough booze to sink a navy. But the highlight, as it should be with any party, was the attendees. If I was expecting a bunch of snooty multi-millionaires, who had little time for interloping relatives (which of course I wasn’t . . . OK, maybe a little), I couldn’t have been more wrong. Really, what should I have expected from classy people like Suzanne and Al? To the person, every one of the guests was genuinely friendly, interesting and engaging. I almost felt like I belonged there, which I had learned the day before that I didn’t.

The day before was one of those very memorable days – one that you’d love to live over and over. We arrived at Desert Highlands golf clubhouse and were met by the golf attendants. They took our clubs and then they took our car! Before I could run after them yelling “Hey, my car’s being stolen”, Al let me know that the club offers a free valet service and that my car would be returned upon completion of the round of golf . . . and no tipping! I knew that!

The manicured golf course, nestled around Pinnacle Peak, is a visual spectacle; even the rough was like fairway, which is a good thing as I spent plenty of time there. I also spent a good deal of time in what they call the ‘transition’ area and quickly discovered that getting through the transition area was a kin to crawling with the French Foreign Legion through the Sahara Desert. Suffice it say that my game allowed me to see the entire golf course and way too much of the ‘transition’ area. It was nonetheless a beautiful golf course, the weather was perfect and I was with good company – I kept telling myself that the score really didn’t matter.

I did managed to play the 19th hole well – the Desert Highlands clubhouse, which was very posh to begin with, had recently been remodeled and was now nothing short of spectacular, with new boulder-framed sitting areas and fire pits around a new, outside ‘Sunset Bar’ over-looking the pool and the city of Scottsdale beyond. Add a cold beer and it doesn’t get much better than this. But it did! 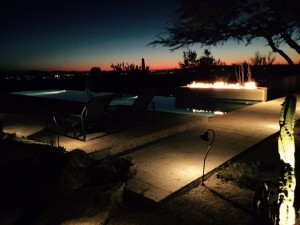 Friday evening after golf, we were invited to dinner at the home of a very fun couple, Bob & Liz Gett (pronounced jet), friends of Suzanne and Al. The Gett’s home should be called the Grand Desert Highlands Resort – comparing it to a luxurious Ritz-Carlton would be selling their home short!  The 8,500 square foot, elegantly decorated home actually is only out done their beautifully appointed outside living area, with landscape lighting, pool, spa, multiple fire places, giant TV screen, covered barbecue area and . . .and . . . and . . . 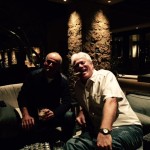 Bob & Bob having a Cuban cigar

After a delicious dinner and engaging conversation about the Patriots’ recent Super Bowl victory (Bob & Liz are from the Boston open and they attended the game), we sat outside with after-dinner drinks and watched the city lights of Scottsdale come alive following one of those spectacular Arizona sunsets. Just when I thought the evening couldn’t get any better, Bob asked, “Would you like a Cuban cigar?” Heaven.

Thank you Suzanne and Al for a weekend that our father would have really enjoyed, even at 101!