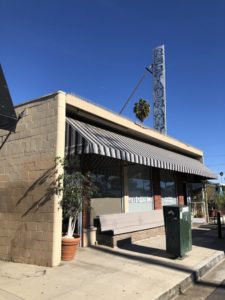 The outside of Pete’s, minus the waiting line

It’s long been said that the best restaurants are to be found in funky neighborhoods or strip malls.  Generally, I’ve found that to be true and we tested that theory on our return trip home from the Central Coast.  As it happens, our kids were vacationing at the beach in Oxnard so we made a plan to meet in Ventura for brunch.   I picked Ventura because it was a straight shot for us to get back on the freeway.  The older we get the more important that becomes – we get lost easily these days.  I have never been to Ventura but assumed they certainly would have a good place for us to meet so I consulted my expert friend, Yelp.  Yelp has been pretty reliable over the years – if enough people have given a place of business 4-5 stars then it has usually proven to be true.  (On the other hand, if it only has 2-3 you can bet the reviewers are related to the owner).  Sure enough, the #1 restaurant in Ventura is Pete’s Breakfast House.  And, since we were traveling with Dash the Wonder Dog it was a bonus that they allow dogs on the patio. Perfect!  Plus, their website indicated they had been featured on Food Network’s hit show Diners, Drive Ins and Dives with Guy Fieri back in 2012 .  I’ve never known Guy to pick a bad dive.  And I think Pete’s qualifies as a dive since it is right across the street from a tattoo parlor.  Okay…maybe not the highest end of town but then again, that bodes well for the food. 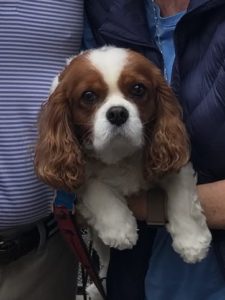 Sure enough, we arrived at Pete’s and I was just slightly concerned with the neighborhood.  Not bad enough that I didn’t want to get out of the car, but enough so that I locked the doors while my husband went in to check the place out.  Once he got our table we ventured onto the patio, only to be met by a waitress who fell in love with Dash and immediately brought him a big bowl of water.  So far…five stars for liking my dog.  Once the family arrived and we perused the menu we mentioned to the server that one of our party has a dairy allergy and wondered if their bread had egg in it.  She not only went in to check with the cook but actually brought out a loaf of the bread so we could read the ingredient label.  Once our food arrived we learned why Pete’s is the #1 spot.  Not only was the food terrific but the portions were huge.  We all had different dishes – pancakes, omelets, French toast, breakfast burritos, avocado toast – and all of them were fabulous.  I decided to go with Pete’s signature dish, the Pancake Roll. 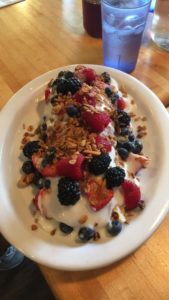 The Pancake Roll, as the menu warns, is a HUGE pancake filled with yogurt, and then topped with berries and home made granola.  When our server first brought it out I thought it was something for the whole table.  Even I, who eat pancakes almost every Sunday, could only eat one third of it.  But boy, that one third was one of the best things I’ve ever tasted.  When my husband went inside to pay the check he spoke with the owner about our great service and excellent food.  The owner’s reaction was one of gratitude and pleasure that we enjoyed it, even though I’m sure he must get that same compliment dozens of times a day.  Maybe his gracious attitude is why they are so successful.  In fact, when we left, there was a long line out the front door at 11 on a Monday morning.  I learned that is pretty typical.

In any event, if you’re ever within a 50 mile radius of Ventura I highly recommend Pete’s Breakfast House.  And, for that matter, so does Dash.