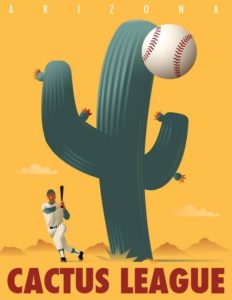 If you live in a sunbelt state you would know what month this is without looking at a calendar.  The tip off is increased traffic, a shortage of dinner reservation slots and thousands of white legs in Bermuda shorts.  All that adds up to one thing, it’s March – the month of Spring training for baseball.  Both Florida and Arizona get swamped with visitors this month and then – like magic – they dissapear on April 1.  Last year more than 1,737,975 people attended Spring training games in Arizona’s Cactus League!  Oh sure, some die-hard fans may have attended 20 games or more, but still, that’s a LOT of people coming to the desert in a short period of time.  According to the official Cactus League stats (and isn’t baseball just full of those?), the biggest number of fans visit from Chicago to see their beloved Cubbies.  More than 16,000 people showed up for just ONE game last year.  And who can blame them when the average temperature here is 75 and back home…well, they’re putting on six layers of clothes just to walk the dog. 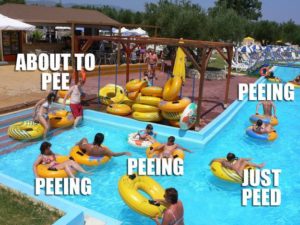 Baseball is not the only event that March brings.  Seemingly every school in the United States is on Spring Break over the next four weeks.  Normally Arizona is not as inundated as Florida, given that we don’t have sandy beaches or a long history of hosting drunk college students.  But this year it seems there are more kids visiting grandparents in our community.  Maybe with the corona virus people have cancelled trips to Disneyworld or Atlantis...who knows?  Grandma and Grandpa’s house sounds like a good alternative – it’s free and less germ-ridden than your average hotel room.  I expect that for the next month our community pool is going to need extra chlorine for those youngsters who confuse the pool with the restroom.  Our gym will also be packed – mostly with college-age kids who run on the treadmill at speeds that I could only dream about.  God, they make me feel old.  They will also be talking on their phone and – most disturbingly – not wipe off the equipment after they use it.  When they leave at the end of the month we will have been exposed to every virus currently circulating in our institutions of higher learning.  Personally, I’m skipping the gym this month – I can’t find a hazmat suit to fit me.

Finally, for some reason the golf clubs around here have conspired to schedule all the big invitational tournaments this month.  Okay, granted, I don’t have to play in our club’s event, but it’s really fun and at least it’s an outside activity.  Plus it’s always fun to bet on the same people who win every year.  In the golf world these people are known as “sandbaggers”, meaning they artifically inflate their handicap and and then shocked – SHOCKED! – when they shoot an unbelievely low score in the tournament.  So betting on them to win is the only way to feel good about these people – they are so reliable that every year there is money to be made on their shenanigans.  I’m just hoping that my score isn’t so bad that I’ll wish I had been quarantined with the corona virus instead.

The good news is that this March will bring two great events – this week we will be hosting brother Bob and his wife Linda and next week is St Patrick’s Day.  It’s fortuitous that these two events will happen so close together because not only are we excited to spend some time with Bob and Linda, but just to add to the anticipation, my brother is the only member of my family who will share a Guinness with me in salute to the old country. That almost makes up for all those white legs we’ll be spotting this month.  On my visit to Ireland I was told that Guinness is considered medicinal, packed with vitamins and minerals.  That’s probably a lot of blarney.  Still, maybe the CDC should put it on their “recommended” list, right up there with hand sanitizer.  After all, it’s probably just as effective and it’s a heck of a lot easier to find.