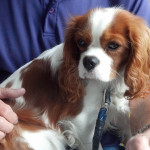 Dash the Wonder Dog in a quieter moment

Over the past three months we have been doing LOTS of homework around our house.  Studying, practicing, shouting. Lots of shouting.  Let’s just say the atmosphere has been a little tense.  As much as we rehearsed, success was infrequent and attention spans were non-existent.  But finally, last Saturday, our big day arrived – Dash the Wonder Dog was tested for his Canine Good Citizen designation.  I swear I haven’t been as nervous about a test since I took the SAT.  Actually, I wasn’t that nervous about the SAT since I had pulled an all-nighter the night before and could barely fill in the circles on the test paper (which probably goes a long way toward explaining why I didn’t get into a better college).  But this day was Dash’s big day and nervous energy prevailed. We made sure he had a good night’s sleep and a hearty breakfast.  “They” say it is the most important meal of the day and I wasn’t about to question whether that also pertains to our canine friends.  We made sure he had “done his business” beforehand as I was quite certain that pooping unexpectedly in public was not part of the test.  At the appointed hour, we walked into the classroom at Pet Smart where Dash immediately lost control and jumped up on the instructor.  It was going to be a long day.

The first part of the test was done in the classroom where the conditions were somewhat controllable.  Dash sensed my uncertainty and shot me a look conveying “Chill, Mom, I got this”. I wasn’t so sure. None of our practice sessions indicated anything close to success. But there was no delaying the test. The first few requirements were child’s play – “sit”, “down”, “stay”.  Basically the canine equivalent of kindergarten.  But then it got more serious – he had to sit and stay while I walked 15 feet away and then come to me on command. My palms were moist, my mouth was dry and Dash was distracted by a rather comely Poodle walking past the window. I took a deep breath and called him to me.  Just as Dash passed the mid-point the devious instructor placed an open bag of peanut butter treats between him and me.  Jeez – that’s like asking me to pass by a piece of Costco’s chocolate cake without at least sticking my finger in the frosting.  Luckily, as it turns out, Dash the Wonder Dog has a lot more self-discipline than I do.  He ran right over to me, hardly giving a faretheewell to the treats.  I’ve never been prouder in my life.  After two more “inside” tasks, we ventured out into the aisles of the Pet Smart store.  On a Saturday Adoption Day.  I’ve seen less chaos at an Under Six soccer game. 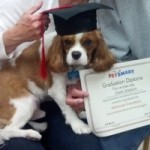 We began by testing whether Dash could pass another dog and owner as they walked by on our left side.  Fortunately, just as we were passing the other dog and his master, Dash became mesmerized by some goop of unknown origin on the right side of the floor.  I was momentarily concerned about the make-up of this “goop” since Dash was proceeding to ingest it, but decided to just “take the win” when the instructor said he had passed the test.  Apparently, he can wreak havoc as long as it isn’t toward the other dog or owner.  Good to know.  The next task was to walk 20 feet through a crowd in a “heel” position and then return to the starting point without breaking stride.  The instructor gathered five strangers to act as the crowd.  Frankly, I think some of them looked a little too strange.  I peered at them assiduously, certain that some of them were planted by the instructor with beef liver treats in their pockets.  But again – much to my amazement – Dash walked through the group as if he had better places to go and other people to see.  I was beginning to think someone had drugged him.  This was not the dog that I had been training at home.  Our last task entailed Dash going up to a stranger with me and sitting quietly while I conversed.  He behaved like a champ.  I think all the time I spend talking with my friends on the phone has provided him with a tin ear where I’m concerned.  I can almost see him thinking “blah, blah, blah – does she ever shut up?”  No matter…after ten tests were completed Dash had officially become a good citizen.  We all cheered, donned funny hats, and ate peanut butter treats. 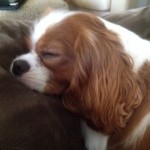 Dash doing what he does best.

But now here we are, back in the real world.  Every day I work with him a bit, trying to ensure that he doesn’t forget any of the valuable lessons he has learned.  Unfortunately, I’m not sure retention is his strong suit.  As soon as I take him outside and ask him to heel he assumes the attitude of a teenager and pulls me in the opposite direction.  I ask him to sit when we reach the corner and he is suddenly rendered deaf.  I am thinking that I would like to have him certified as a therapy dog since he is so gentle and loving by nature.  But at this point, I think his forte is the “sleep” command.  He has that down pat, especially when he’s on our bed.  Now all I need to do is find someone who needs a sleeping therapy dog.  Who snores.  Oh well, we’re proud of him anyway and the framed certificate looks great on the wall next to the college diplomas. 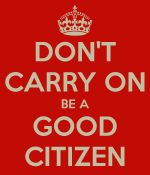 Recently we have been putting Dash the Wonder Dog through his paces at obedience school.  This past weekend he graduated from the Intermediate level and next week begins a six-week journey to become a Canine Good Citizen. Actually, the training is more for me.  I am learning that consistency and discipline are not exactly my strong suits.  More on that later.

Today I want to write about the brilliant idea I had during Dash’s training – Obedience School for People!  Don’t laugh – think about how much less annoying life would be if everybody had to attain their Good Citizen certificate.  One of the major complaints we hear, either in person or on TV,  is  how rude and inconsiderate people are these days.  “Honkers” in traffic, people with full carts in the Express Check-out line, someone in front of you at Starbucks ordering Cappacinos for their entire office.  But imagine a world where people were actually trained as well as our dogs!  To prove my point, here are some examples:

1.  Fetch – with canines the dogs are taught to go get something that you’ve thrown and bring it right back to you.  Oh, if only this had applied to some of my friends over 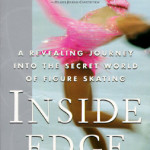 the years.  I have loaned – and not gotten back – clothing, utensils, garden equipment and various other household items.  As an example, a friend “borrowed” my book on figure skating written by the great sportswriter Christine Brennan.  That was in 1997.  For the first year I hinted to her that I wanted to refresh my memory about some skaters and would sure like to re-read the book.  Nothing. Several other hints were also met with inaction. Finally, when we were moving out of state and I was pretty sure that I would never see her again I came right out and reminded her that the book was about two years overdue at my personal lending library.  Still…to this day the book resides on her bookshelf, permanently “borrowed” from me.   But – and here’s where the brilliance of my plan comes in – if my friend had been through training I could have said “fetch” and my book would have been promptly returned. 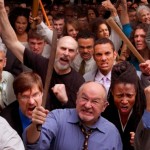 2.  Wait – dogs are not generally long on patience or attention spans.  Sort of like husbands.  So the “wait” command teaches them to pause before entering or exiting a room or to stop doing whatever they’re doing (like bugging you to throw the ball for the 1,000th time).  I was thinking about the “wait” training trick when I was standing outside Costco the other morning.  I was there about five minutes before they opened and joined a crowd of about 20 people.  It was not particularly cold – it’s Scottsdale for Heaven’s sake – nor was it the morning before a holiday.  In other words, there should have been no overriding sense of urgency.  But at 9:03 when the big steel door still had not opened, not one but two (!) people called the store demanding that they open up.  And in rather harsh terms, I might add.  Now I have to admit, I love Costco.  I own stock in the company, I think they treat their employees well, and best of all, if you time it just right you can get a free meal by swerving through the aisles picking up all the free samples.  So when people are so impatient and rude that they are yelling at the nice Costco people for being THREE MINUTES late, I think that is a call to action.  If ever there was a need for people to  heed the “wait” command, it is apparently at the Scottsdale Costco.

3.  Heel – this is actually a technical term for when the dog is facing forward with its shoulder at your calf.  It is called their “positional space”.  Boy oh boy, based solely on 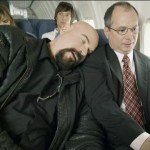 my observations, “heel” is a concept where we humans fall woefully short. We’ve all experienced the personal space invasion – the drunk at the cocktail party who stands so close that you could critique their dental work, the oaf at the movies who hogs the armrest, or the dunderhead at the Little League game who has to sit thisclose to you on the bleachers when three rows stand empty in front of you.  The worst violators seem to be on airplanes.  There are the Droolers, the Seat Tilters who leave you no leg room, and of course, the Sleepers.  I once had the misfortune to be in the window seat next to a rather large man who not only spread out all over the empty middle seat, but apparently suffered from narcolepsy.  Despite several attempts to wake him, he slumbered on.  My gyrations to crawl over him to get to the restroom would make a call girl blush.  If everyone was required by the rules set down in my Good Citizen requirements we could confidently enter the public square and – this is critical – airplanes, knowing that everyone would stay in their own darn “positional space”.

I’m sure there are other examples of how we might “train” people  I’d love to hear your ideas.  In the mean time, I’m sticking with the dogs.  I think my success rate will be better.