”I’ve forgotten how to pack!”  Those were the words I muttered as I prepared for our first long vacation in over two years.  While my husband concerned himself with his clothes and golf equipment, I fretted over snacks for the trip, food and bedding for Dash the Wonder Dog, some staples for our stay at the condo, my clothes, knitting projects and, last but not least, golf equipment.  It’s little wonder he thought prepping for the trip was a snap.  But it was all for a good cause, our first trip back to Sun Valley in three years.  We have been visiting there almost every year since 1988, and although we’d heard that the pandemic has changed its small-town feel, we were excited to go back.  Getting there, however, was part of the challenge.  I am all for taking interstates.  Call my crazy but I like a plethora of eating options, bathrooms, and good cell service.  My husband, who insists on doing all the driving, loves the solitude of the smaller highways.  Since prerogative goes to the driver, we drove up to Idaho on Nevada’s Highway 95.  You would be hard pressed to find a more desolate road in the United States.  It is two lanes the whole way, with only four passing lanes in over 400 miles.  Which means everyone is going about 100 miles per hour and passing with great frequency.  As an added attraction, there are hundreds of miles where there is no cell service. I had visions of our car breaking down and the bleached bones of our bodies being found weeks later.  But we made it to our stopover for the night, Ely, Nevada, which is smack dab in the middle of … nothing.  Here’s how remote it is: there is no Starbucks in Ely.

The following morning, having safely survived the trek through Nevada (and no coffee) we made our way up to Sun Valley.  It felt like coming home, a place so familiar that we both breathed a sigh of relief that we were finally back in our “happy place”.   Not everything was perfect.  Normally after Labor Day you can shoot a cannon down  Main Street and not hit anyone.  This year, there was traffic and people everywhere.  We had heard that both bicyclists and drivers were out of control and sure enough, on our first day we witnessed a bicyclist being hauled off in an ambulance.  On the walking path to town the city has painted on the sidewalk,  “If you’re on a bike and you want to wave, make sure you use all your fingers”.  One of our friends, who has lived in Sun Valley for over 30 years, says the vibe has changed in the past year.  “Everyone is more on edge.  People feel entitled and gripe about everything,” she told us.  Still, the mountain and the trees are magnificent, so we chose to look at nature rather than rude people from California and Seattle.  This time of year the trees are beginning to turn and there is nothing more magnificent than quaking Aspen trees, with their full complement of fall colors, framed against the dark green pines.

So we spent the first few days taking in the beautiful views, playing some golf, and drinking Guinness.  And the our first weekend something wonderful happened – it snowed!  It wasn’t much but it contributed to a perfect Sunday – 48 degrees at the peak of the day, a roaring fire, and football on TV.  It doesn’t get much better than that.  As a bonus, the cold weather seemed to weed out the faint of heart.  On Monday morning, as we ventured into town, we noticed that it had cleared out.  Sun Valley was as we’d always remembered it in late September – quiet. Just the way we like it.

Next time: we venture further north and then wend our way home – on the interstate. 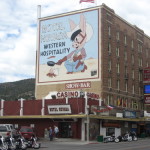 One of the joys of a long car trip is passing through towns that are barely on the map.  Such was the case on our journey up to Sun Valley, Idaho when we stopped for the night in Ely, Nevada.  Where, you ask?  Ely (pronounced EE-LEE) is smack dab in the middle of nowhere.  It is in the eastern part of the state on State Route 93, exactly 250 miles north of Las Vegas and 250 miles south of Twin Falls, Idaho.  This was not our first stop in Ely…it happens to be just a bit past the mid-point from our home up to Sun Valley so it’s a good place to rest for the night.  “Rest” being a relative term.

The nicest hotel in town is a La Quinta Inn that was built about five years ago.  It is pretty much what you would expect from a La Quinta  – the bare minimum of furniture in the room, cold bagels for breakfast, and people slamming doors at 2 am.  This trip we were delighted by people across the hall who left their baying hound alone in the room for five hours.  There are several casinos in town where, we assumed, the dog’s owners were on a hot streak.

However, as I stated at the beginning, I find a particular joy in going through small towns.  Having grown up in a town where everyone knew everyone else, I find it comforting to know that such places still exist.  A habit I picked up years ago is buying the local newspaper to get a flavor of what life is like in these small burbs.  In Ely, the local paper is called The Ely Times.  Clearly they didn’t spend a lot of time coming up with a catchy name.  On the other hand, I think simplicity is key in Ely.  My brother, Bob, has the same fascination with small town papers and we obviously came to that trait naturally since our parents owned our small town paper, the Novato Advance.  Or The Retreat, as some people took to calling it. 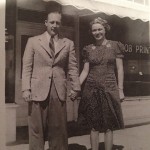 Mom and Dad in front of the Novato Advance

Regardless, the name of this blog is a tribute to a column that our mother wrote each week, “A Bird’s Eye View”, in which she regaled people with stories about local activities.  Her riveting articles chronicled such highlights as  “Mr. and Mrs. Tresch went into San Francisco for lunch on Thursday where they enjoyed a crab salad at Aliotos” or “Mr. and Mrs. J.J. Smith entertained their cousins from Modesto last week”.

So it was with some interest that I opened the Ely Times to see what constituted news in this small town of 4200 people.  Here were some of the major stories: 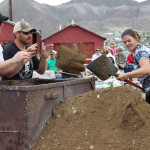 Mucking competition???  I thought that was a skill held by scrappy newspaper reporters trying to “get the goods” on corrupt politicians.  But, being the intrepid reporter that I am, I did a little research and discovered this is a very serious competition, conceived to keep old-fashioned mining techniques alive.  There are seven events in the competition: Jackleg  drilling, gold panning, hand mucking, hand steeling, timber sawing, surveying and track stand. Points are assigned in each event and the lowest cumulative score at the end of all seven events is the overall winner.  I guess it’s sort of the decathlon of mining.

I was sorry that we had to miss all of the festivities…I’ve never been one to pass up a good mill ball toss.  Driving out of town the next morning we passed the new Dialysis Center.  I recalled there was an article in the paper about the local quilting guild that donated dozens of quilts for the comfort of the patients undergoing treatment there.  In Ely, if someone is in need, there is someone to help out.

I’m not sure I could live in a town that small again; I’ve grown accustomed to Costco, Starbucks and high-speed internet.  But I envy these people in ways that others envy the Kardashians.  They live life simply, they take care of their neighbors, and the only muckraking they care about has nothing to do with politicians.  I think they’re pretty darn lucky to live in Ely.