In the last three weeks we’ve given you a) some crazy gift ideas, b) some little-known and less care about Christmas’s in other parts of the world and, perhaps most important of all, we’ve given you c) the recipe to Dad’s Christmas Ice Cream Fizz.  Yet, Christmas isn’t here yet, so this week there’s more Christmas stuff that could possibly help get you into the Christmas ‘spirits’. 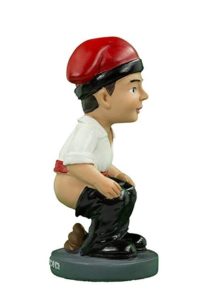 We’ll start with what I have found to be the  most ridiculous way that Christmas is celebrated. The Catalonia region of Spain (around Barcelona) is known for its somewhat unorthodox wooden toys and statuettes. El Caganer (which would roughly translate as The Pooper) is one of them. A mysterious figure that insists on pooping wherever he’s placed; this dwarfish, leering figure is part of any Christmas stall or arrangement of figurines. He’s even placed in Nativity Scenes. – and they blamed that smell on the cattle in the manger!

Getting a fruitcake this Christmas?  As it turns out, the rumor that there is only one fruitcake in the world and it just keeps getting passed around, is true.  It’s fairly common knowledge that hardly anyone actually enjoys eating this holiday loaf, but because of its great significance in the All American Christmas, each year many hosts are forced to smile falsely and pretend to be elated at receiving this baked good that can crack a kitchen counter top.  This cake, containing all kinds of fruits and nuts, is derived from the British “Christmas Cake” but has roots in Roman times. Perhaps that Roman fruitcake is the one that is still circulating.

There are all kinds of Christmas traditions and stories from all around the world, but the one that is most sensational and heart-warming to me, is the one that took place in Belgium during WWI – the ‘Christmas truce’. 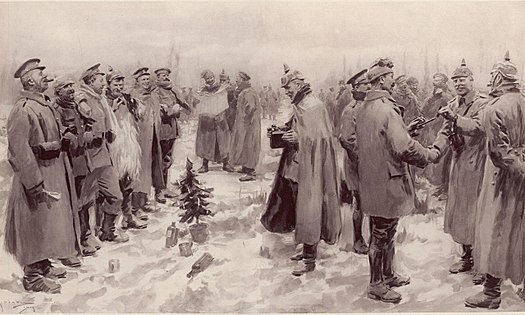 Meeting in ‘No Man’s Land’

On December 24, 1914 it began when German troops began to light candles and sing Christmas carols and the British soldiers would either join in from their own trenches or start singing their own carols.  Then, certainly without permission from high command, a German messenger walked across ‘No Man’s Land’ to broker a temporary cease-fire agreement.  Soon troops from both sides walked bravely onto ‘No Man’s Land’ and met, talked and exchanged food, souvenirs and cigarettes with one another.  They even played a game of football (soccer) which the Germans won 2-0.  It should be noted that the British got revenge when the Germans lost the war.  The British also won the ‘rubber match’ when Germany was defeated in WWII.

While this event was the first of its kind and certainly the most publicized, nearly 100,000 British and German troops participated in a ‘Christmas truce’ that year all along the Western Front.  In fact, there are similar stories of this same thing happening on the Eastern Front.  As expected, the commanders from both sides were not happy with this fraternization and soon put an end to ‘peace on earth, good will towards men’.

It is so sad that the great message in this story seems to have been lost in history.

The entire staff here at ‘From A Bird’s Eye View’ (OK, just Suzanne and me) hope you and your family have a wonderful holiday season and a happy and healthy new year.