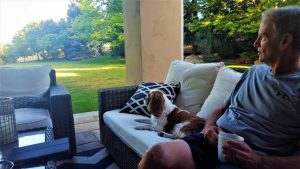 Dash and Dad in the happy place

Each summer we take a week to visit the kids up in Colorado – it is always so good to see them and it gives us some respite from the heat.  This year we were especially grateful for the timing of the trip when we saw that the temps in Scottsdale were going to hit 113.  How smart are we?  Turns out, not very.  The heat wave that Arizona experienced was evident throughout the west.  The temperature in Cherry Hills Village was 93 on two days of our visit and when you add in the affect of the altitude, we felt like we were back home.  Except that the company was better.  Also, the mornings are really beautiful there  – cool and crisp.  Our favorite spot is our daughter’s backyard where, accompanied by Dash the Wonder Dog, we sat each morning with a cup of coffee to experience our happy place.  We mentioned something about moving in for the summer.  I’m not sure they heard us. 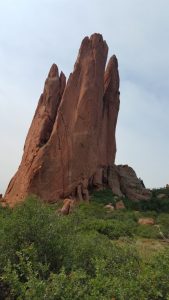 One of the many peaks in the park

Colorado is truly a beautiful state.  Just ask all of the Californians that are moving there.  Still, by LA standards the traffic is still bearable and with the Rocky Mountains always in view somehow being stuck in traffic isn’t quite as annoying.  This year our daughter thought it would be fun to explore Colorado Springs and the Garden of the Gods.  Garden of the Gods Park is a National Natural Landmark, with dramatic views and 300′ towering sandstone rock formations set against a backdrop of snow-capped Pikes Peak.  The name of the park came about in 1859 from a collaboration between two surveyors, M.S. Beach and Rufus Cable, who started out from Denver to establish a new town. While exploring nearby locations, they came across the beautiful sandstone formations. Beach suggested that it would be a “capital place for a beer garden” when the country grew more populated. Cable, however, was a bit more poetic (and dare I say perhaps less of an alcoholic).  His response was, “Beer Garden! Why it is a fit place for the Gods to assemble. We will call it the Garden of the Gods.” The park is truly spectacular, with terracotta peaks and jagged mountains throughout.  There are numerous hiking trails, ranging from easy to “you’ve got to be out of your mind”.  We chose to drive around the park because it was too hot for Dash to walk.  That’s our story and we’re sticking to it.  There is a wonderful visitors center that provides guided tours, interactive displays and, thankfully, restrooms.  The Garden of the Gods was truly one of the most beautiful places we’ve seen – only a few minutes off of a major interstate and yet we felt that we were a million miles away.  It is definitely worth the trip if you are ever in the area. 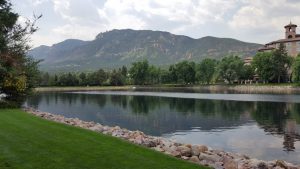 The lake at The Broadmoor

Our final destination in Colorado Springs was the famous Broadmoor Hotel.  The hotel is one of the grand classics of the country.  We looked up room rates a few weeks ago on the chance that we might want to stay there on our way up to Denver.  At a cool $470 per night for the least expensive room we decided we’d just drive right on through.  The grounds, as you might expect, are beautifully landscaped and meticulously maintained.  There is a massive lake in the back, nestled between the two major buildings of the resort. We ate outdoors at their Natural Epicurean restaurant where we enjoyed fabulous food in a tree-lined patio.  Of course we had to check out their three golf courses as long as we were in the neighborhood.  As you might imagine, they are groomed to perfection.  The Broadmoor will be host to the 2018 Senior U. S. Open.  I told my husband he needs to work on his game so he can qualify.  Best of all, The Broadmoor is dog friendly.  Dash the Wonder Dog made himself right at home, greeting guests as they entered the lobby, checking for any errant food droppings at the restaurant, and making a friend at the Broadmoor’s pet shop (right).  He found his new acquaintance to be a bit cold, but the owner of the shop gave him treats so all was not lost. 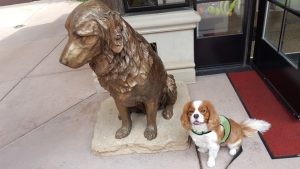 After an hour of so of walking around the hotel grounds we finally concluded that we would have to leave The Broadmoor for another time.  But we will definitely be back.  As soon as we rob a bank.