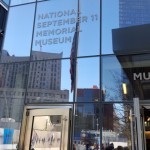 There is a quietness about the September 11th Memorial and Museum.  Visitors appear to be lost in thought as we wait for the doors to open.  Trepidation is etched on everyone’s face – do we really want to re-live that horrible day?  And yet we all file in, bracing ourselves for what we know will be a difficult and emotional visit.  The museum offers three options for viewing the exhibits; we chose a guided tour led by one of the volunteers.  Our guide was a young man from New Jersey who lost neighbors in the terrorist attack, so for him, this museum is personal.  I reflected that we are fortunate in our generation to be guided by such people; future generations will experience it from a more distant perspective.

Our guide started the tour at the bottom of the museum, in Foundation Hall,  where the famous “slurry wall” stands.  When the Trade Center was built in the mid-1960’s,  the slurry wall held back the Hudson River, which lapped at the side of the building.  After the attack on 9/11, when the site was being excavated, the workers were astounded to find that the slurry wall had survived.   Daniel Libeskind, the architect who led the redevelopment of the site, pushed to keep a portion of the slurry wall in place.  He proclaimed that it was a testament to the determination and resilience of a nation; a document “as eloquent as the Constitution itself”.

Also in Foundation Hall is the “Last Column,” a 36-foot girder that was the last to be removed from the site, marking the end of the recovery effort.  During the excavation it quickly became a makeshift memorial, plastered with Mass cards, rosary beads, flags, photos of missing innocents, and patches from fire and police units.  When it was finally cut down, it was laid on a flatbed truck, draped in black, with an American flag over it, and escorted by first responder honor guards to a place of safekeeping.  It now stands in Foundation Hall as a physical reminder of our resilience and hope.

There are many displays that feature recovered portions of the buildings – bent beams, the only remaining glass window and the “Survivor’s Staircase”, used by many to escape the burning towers.  But I suspect that the main reason most of us come to the museum is to pay tribute to the people who were lost that day.  After seeing massive beams bent and misshapen by the impact of planes and the heat of the fires, it gives new perspective to what the people trapped in those structures experienced.  I recall one of the shell-shocked firemen who survived the collapse of the towers saying, “How bad must it have been up there that people thought jumping out of a window from the 100th floor was the better alternative?” 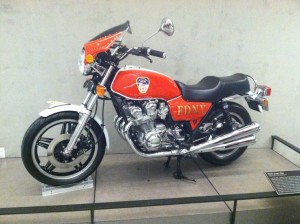 One particularly poignant display is of the motorcycle that belonged to Gerard Baptiste, a firefighter with Ladder 9 in Lower Manhattan.  Two weeks before 9/11 he bought a broken-down 1979 Honda motorcycle off the street for $100.  It wouldn’t start so he had to roll it to the firehouse.  The guys ribbed him endlessly about buying a worthless piece of junk.  Baptiste died at the Trade Center and shortly afterward, the surviving members of his firehouse decided to restore the bike in his honor.  With the help of Honda, some motorcycle shops and private donors, they were able to transform it into what is now known as “The Dream Bike”.  The bike was auctioned, with proceeds donated to the education fund for the children of firefighters from Ladder 9 who were lost on 9/11.  The winning raffle ticket, selected by Baptiste’s mother, went to a woman from California who donated the bike to the museum so everyone would know its story. 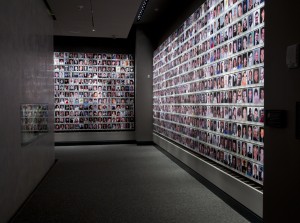 The Wall of Faces

There is a room called “The Wall of Faces” filled with pictures of the victims.  It is hard see their smiling faces, knowing that their lives would end so tragically.  They are the faces of people who, on a gloriously sunny Tuesday morning,  kissed a loved one good-bye, walked out their front door, and were never seen again.  Down the hall from the “Wall of Faces” is an alcove, a small space with black walls and four benches.  On each of the four walls is a projection of video remembrances of the victims.  Each person who died is remembered with a picture and a bit of personal background information.  For most of them there is also an audio remembrance from a family member or friend.

I sat in the video room for a while, as the images and voices streamed past.  It was heartbreaking to hear a young woman talk about how much her children miss their dad and a father describe how proud he was of his lost son.  One woman remembered her husband through the story of a Thanksgiving dinner when they got into a spat because the gravy was missing from the dinner table.  They argued and both stalked off to the kitchen.  She said they imagined that all of the relatives thought they were in there fighting but, in fact, they were kissing.  She said “that’s just who we were”.  Some voices were very emotional as they described their loved one, some sounded wistful, and others like the woman with the gravy story, chose to remember a lighter moment.  No matter the emotion, the remembrances brought the victims back to life, and made the violent nature of their death all the more jarring.  Our guide told us that if we saw a guide wearing a tan vest, that person is a family member of a victim.  Some of them come every day as a way to work through their grief and talk about their loved one.

I should note that there is a small portion of the museum that describes the rise of Al Qaeda and the planning of the 9/11 attacks.  There are photos of Osama bin Laden and the 19 hijackers, along with a video description of how they carried out their plot.  The photos of the hijackers are placed very low on the wall, much below eye level, so you can easily walk past them without having to look at their faces.  After what I seen prior to that exhibit, my instinct was to give those pictures a swift kick.  I questioned why we had to acknowledge them at all in a place of reverence and dedication.  But on further reflection, I realized what the museum designers intended – future generations will not recall the events of 9/11 from personal experience, they will need to learn about it from history books and places like the September 11th museum.   So the “who”, “why” and “how” need to be included to present a complete picture.