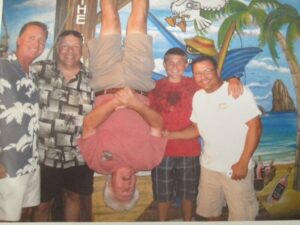 Me at the Giggling Marlin

You might not have noticed, but over the past eleven years of writing about my experiences, you’ve not heard a lot of ‘fish stories’.  Just one in fact, which sort of sums up my fishing acumen – my trip to Cabo back in July 2012.  Here’s the link in case you’re in need of a good laugh!

Yes, that’s me hanging upside down at the Giggling Marlin in Cabo, the penalty for being ‘skunked’.  And in a ‘father-like-son’ moment, Jeff experienced the same fate. 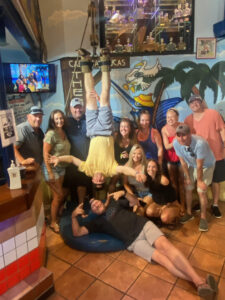 Jeff at the Giggling Marlin

Now, 10 years later, we’re off to try fishing again, this time to Alaska with neighbors, Mark Johnson, Larry Affentranger and our three sons/sons-in-law, Jeff Sparrow, Chase Johnson and Matt Paul.  Mark and Larry are experienced fishermen, why they invited us along, I’m not sure – other than comic relief.  Or maybe they just didn’t believe how bad a fisherman we were and wanted to witness it firsthand.

When Jeff was growing up, I felt obligated to take him fishing. Isn’t that what dads and sons do?  So, I took him to Big Bear Lake – we caught a boot, Mammoth’s Lake Mary – we caught a lady’s undergarment, Lake Tahoe – we caught a cold.  We’ve NEVER caught a fish!  When I sent Jeff the flyer about this Alaska fishing trip which ‘GUARANTEED’ us to catch fish, he called me after he’d read the brochure and said, “They may have to change their guarantee after the Sparrow boys’ visit!”

We’re headed to Sitka, Alaska, which is on the ‘Alaskan Panhandle’ on the island of Baranof in the Gulf of Alaska between Juneau and Ketchikan– I’m not sure if we can see Russia from there or not.  I’ll let you know.  Sitka was actually under Russian rule from 1799 – 1867.  So, it may be on Russia’s list to re-take at some point – hopefully not this week!

While Sitka is the 5th largest city in Alaska, it has only a population of about 8,500.  If you want to get a real ‘feel’ for the city, you can watch the Sandra Bullock movie, The Proposal, which was shot there.

On my ‘check the box’ list, I can tell you that Alaska is one of only five of the United States that I’ve never visited.  Additionally, I’m getting another check the box – some of you more senior, seniors will remember the old Bob Hope, Bing Crosby, Dorothy Lamour ‘Road movies’, which took them to various exotic locations around the world.  Even though, as my wife continually reminds me, the movies were shot in the back lot of Paramount Studios in Hollywood, I still credit them for giving me the ’travel lust’ that keeps we wanting to visit more and more places.  The seven ‘road movies’ included the following destinations: Singapore, Zanzibar, Morocco, Bali, Hong Kong, Rio and Utopia (Utopia in the movie is Alaska).  So, this will be the first ‘road movie’ destination that I’ve visited.  I want to visit them all and I’m not getting any younger! 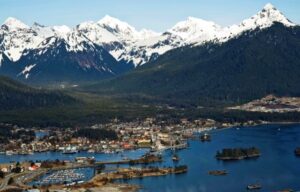 Back to Alaska, the plan is to fly up there on Saturday, fish on Sunday, Monday and Tuesday and fly back on Wednesday.  I’m sure Mark, Chase, Larry and Matt will be bringing back large packages of flash-frozen Halibut, Salmon and whatever else is swimming around up there.  Jeff’s and my bag will be filled with dirty laundry, Band-Aids to cover hook gashes and soggy shoes.  The weather prediction as of now is ‘rain’ every day!   So, it will be cold, wet and probably fishless, but I’m still guessing we will have a good time!